Ben Jensen, left, and Matt DeGrandpre are partnering with DGA to train beginning dairy farmers in the new facility at Wolfe’s Neck when it opens this spring. 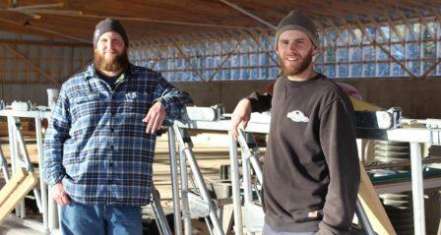 FREEPORT, ME — Ben Jensen can walk through the dairy barn at Wolfe’s Neck Center for Agriculture & the Environment and name each of the roughly 45 cows in his care, as well as their individual personality quirks.

The cows seem pretty content in their current home, but they’re about to get an upgrade with the completion of a new, $1 million organic dairy facility at Wolfe’s Neck, scheduled to be up and running sometime this spring.

The new facility, just up the road from the current barn, will add roughly 30 acres of grazing space to the current 40, and move the milking from a temporary addition to the barn to its own building. The new milking space will have large windows to allow people on tours to see the work in action. The farm has only been a dairy farm for the past four or five years, Jensen explained, and the current barn has had to be modified from its original use raising beef cattle.

The dairy farmers do not intend to add many cows or dramatically increase production with their new space (each cow currently produces a respectable 52 pounds of milk per day); they want to use what they have to help teach a new generation of Maine dairy farmers.

Candice, one of Ben Jensen’s favorite cows, relaxes, her breath forming clouds of steam on a cold day. (Hannah LaClaire / The Times Record)

The center, formerly known as Wolfe’s Neck Farm and rebranded in 2017, is a 600-acre coastal farm and resource center dedicated to education and active participation in healthy food systems in the state.

The program matches candidates through what DeGrandpre described as a mix between the farmersonly.com dating site and Facebook to make sure candidates are a right fit, and they only have four at a time on a rolling basis. It’s hard work, with days often starting before 5 a.m. and ending after 7 p.m., and it requires a lot of dedication and learning under Master Dairy Graziers likes DeGrandpre and Jensen. But the apprentices who stick with it have blown the farmers away, Degrandpre said, adding that they are “in it to win it.”

“We’re building a community of people who want to see success in the field,” DeGrandpre said. “We are trying to keep small, organic farms viable.”

This is for a number of reasons, DeGrandre said, like the rise in popularity of “nut juice,” the name many dairy farmers have given substitutes like almond milk, coconut milk and rice milk. “It’s not milk,” he said. As conventional and mass-producing farms — particularly in the Midwest — are pumping out milk at rates that are leaving “the country flooded in milk” according to Jensen, demand is dropping and many Maine farms are struggling to keep up.

A lot of farms are struggling, but Jensen said he has seen firsthand with their facility that “milk can come from small farms and do well.” Wolfe’s Neck’s focus is on high-quality milk, long-lived cows, and teaching new farmers to get quality milk from long-lived cows.

The apprentices are already helping other farmers by taking the reins if someone is sick, injured, or even looking to retire soon, DeGrandpre said, able to step in immediately if needed and work on a rotating basis depending on needs.