DGA Mentor Dairy Graziers, Mike and Joan Gilles, discuss the benefits of managed grazing during a pasture walk on their farm in Houston, MN. 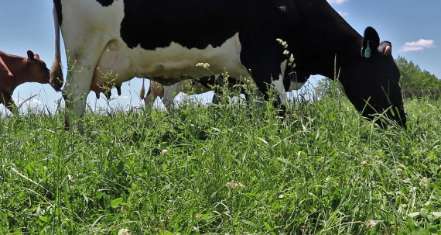 HOUSTON, Minn. ― Mike and Joan Gilles' dairy farm is unlike the majority of dairy operations just off of Interstate 90, because the cows are always out in the grass.

The couple hosted a pasture walk on June 15 sponsored by the Sustainable Farming Association and the Dairy Grazing Apprenticeship.

Mike and Joan Gilles milk about 110 cows and have 100 acres of open ground for pasture grass with another 150 acres of land they rent for growing forages. 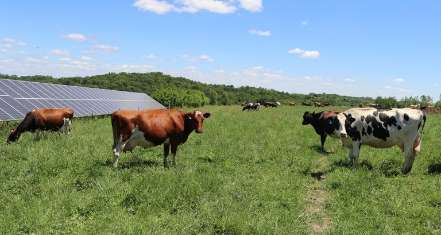 “The whole farm is in grass to rotationally graze,” said Mike Gilles.

He said most of the cropland they rent is organic but they do not sell organic certified milk.

Mike and Joan Gilles are first-generation farmers who started full-time farming in the early 80s, after working for a farmer for six years to learn the ropes before that. They rented land on two other farms before 1996, when they bought the dairy on land with rolling hills near the interstate in Houston.

“It was a slow process of slowly building a dairy, but we've been on this farm as owners for 25 years,” he said.

Mike and Joan Gilles are considered to be “master grazers” by the Dairy Grazing Apprenticeship. They have had apprentices in the past and are looking to add more in the future.

“We're kind of still looking at doing some more of that, to do things that bring in a labor force with a grazing interest, and also to encourage the next generation to look at grazing as a dairy opportunity,” he said.

He said rotational grazing benefits the farm and land in a lot of ways, but most of all, it benefits the animals.

“Can't beat it for the cows,” he said of rotational grazing. “There isn't a healthier environment for them — the exercise, the air.”

He said rotational grazing is using a system that's been proven by history, but he's not against conventional ways of raising livestock.

“Cows evolved for 50,000 years as grazers, and we can't improve on that, so that's where they belong,” he said. “There's a lot of good dairyman that do confinement dairy, and they do their best job, but hands down there isn't a healthier place for cows than out on the grass.”

Gilles said events like the pasture walk are crucial for dairy farmers to better their own operations. 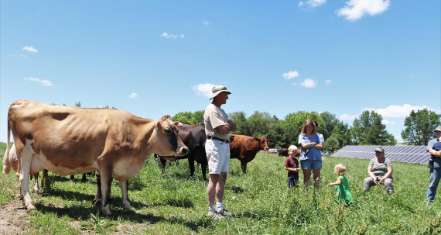 “It's real easy as a dairy farmer just to stay at home and do the work, because it's always there,” he said. “So having people come and be able to share ideas and have conversation on what you're doing is really beneficial.”

He said he was “thrilled” with the young crowd that came to his farm on June 15.

“That's what our goal is, to get the next generation into this attitude of grazing cows,” Gilles said.

Lance Klessig is a resource specialist for Winona County Soil & Water Conservation District, who also runs his own farm near Dakota, Minn., which neighbors the Gilles family farm.

“I've been on the farm several times but am always wanting to learn more about grass management and specifically how they're farming,” Klessig said of what brought him to the pasture walk on June 15. “And just helping if people have technical questions about the forages or clovers, or that type of thing.”

Klessig said he was impressed by the turnout to the pasture walk.

“It's a nice mixture of a couple families — my family being one of them,” he said, with his five kids and wife, Christine, along that day. “There's some custom grazers from Wisconsin here, and a few other folks that are doing some grazing as well. So I wouldn't say it's a huge crowd, but it's a good crowd.”

He said there's “lots of benefits” to rotational grazing, otherwise called management intensive grazing. One of those benefits is water infiltration.

“With having lots of nice forage on the surface, the water just tends to soak in, compared to when the cropland is all worked up and can unfortunately sheet off,” Klessig said.

Another major benefit to rotational grazing is profitability, said Klessig.

“I think probably the biggest one for Mike and Joan (Gilles) is that they're able to lower their cost of production,” Klessig said. “So you may not produce as much milk but your net profit per acre, or net profit per cow, can typically be higher than conventional or confinement dairies.” 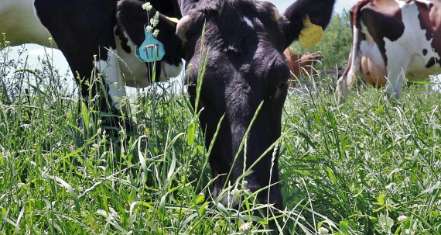 “You don't have to bring all the feed to the cows and haul it all the way,” Klessig said. “Mike was talking about how for 70% of his ration, the cows harvest themselves. They spread their own manure, and he only has to feed them about 25 or 30% of their ration.”

Jordan Meyer and his wife, Rachelle, were also at the pasture walk on June 15. The Meyers run Wholesome Family Farms, selling pastured eggs, chickens, turkeys, beef and pork raised on their land in the driftless region of Houston County.

He said the couple will be buying into his dad and uncle's farm, a conventional dairy, in the near future, and they wanted to pick up some good information they can share with them from the pasture walk.

“Basically just looking to learn a bit more about grazing dairies, and just interact with other farmers who graze,” Meyer said. “Trying to gain even more information on the grazing process — just learn, learn, learn; it's never ending.”