The Changing Face of the Family Farm: How Farmers are Staying Viable

Meagan Farrell, an Apprentice with her father Master Dairy Grazier, Bert Paris, faces challenges to industry with a passion for dairy farming as a way of life and a profession. 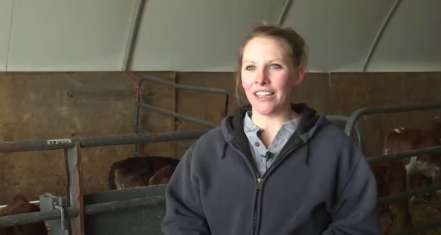 Watch the video below:

GREENE COUNTY, Wis. (WMTV) “Our farm is about 137 acres,” said Bert Paris, surrounded by cows as he proudly looked out over his pastures in Belleville.

It’s another night out in the milking parlor with his nearly seven dozen head of cattle. It takes about ten minutes or so to get everything setup before he spends a couple hours milking in the barn. For him, this isn’t work. It’s a lifestyle that he loves.

“Come on girls,” Paris calmly said as he runs the first round of cows into the parlor.

Just as the milk pulses through the pipes at the Paris Family Farm, a passion for dairy pulses through his veins. Paris grew up on a small farm just south of Madison.

“We dairy farmed there until about 1974, until my dad passed away,” said Paris.

After graduating college and a year of working in the professional world, he wanted to test his odds and come back to his roots.

With a smile on his face he said, “Something inside me said I’d just really like to try it.”

Bert and his wife, Trish, first rented a small farm. They saved every penny and rolled the dice.

The two bought the homestead they live on now in Belleville in 1992. They now milk about 80 cows twice a day.

His second child, Meagan Farrell, is one of four children. She pointed out a sweet memory on the floor in the barn that shows it takes a family to make this operation run. Pressed in the concrete are four small tiny hand prints dating back to 1997.

“I think this one is mine,” she said as she bent down and put her hand in the print. “I think I’ve grown a little bit.”

Farrell is looking to leave yet another mark on the family farm as she is in the process of taking over the operation. In October 2019, she will leave her professional job and be working nearly full-time on the farm. In 2020, she plans to purchase the herd and take on managing the dairy.

“When I was at my professional job in the office, I just felt like I was missing something,” said Farrell.

She said she was feeling such a strong connection to the farm. Every time she came home she just felt an overwhelming sense of happiness. It wasn’t an easy decision, but she really started thinking long and hard about coming back to the farm after the birth of her first child, four years ago.

Why? Because the way she puts it, living on the farm is a way of life.

“Since my first daughter, now we’ve had another daughter and I’m pregnant with our third child right now, so we’re all just very excited to move onto the farm and raise our family.”
It’s something Paris agrees with too.

“We just feel so lucky to be able to own our farm here and raise our kids here,” he said.

Not all farmers feel quite as lucky as Paris and Farrell.

America’s Dairyland is losing dairy farms at a record pace. In the last year, from April 2018 to April 2019, 751 farms were lost, according to the Wisconsin Dept. of Agriculture, Trade, and Consumer Protections. When those numbers are broken down, that’s about two a day.

“My whole life you never dreamed that as a dairy farmer in Wisconsin you wouldn’t have a place to sell your milk,” said Paris. “And for the last three years, we’ve encountered that and that is scary.”

It’s scary because farming is the ultimate game of chance. With so many factors out of farmers’ control, Mother Nature and market prices, farmers have to know how to play the hand they’re dealt.

The dairy crisis is hitting a little too close to home for Paris. In March, he watched as the next farm over from his sold everything at auction.

“Watching them sell out isn’t easy,” he said with straight face. “Most of these places I don’t know if they will ever have cows there again which is really too bad for the dairy industry, the community, for everybody involved.”

With so many factors working against farmers, Paris can’t fight his passion.

“I’m motivated because I enjoy what I do and because I don’t like the alternative,” he said.

Paris and Farrell have tailored their business model to insure they come home with a profit. They have seasonal calving, meaning they don’t milk year round. They’ve implemented rotational grazing and are now crossbreeding the cows to get the ideal genetics.

“Being seasonal and grazing, are both really great insurance policies against drought. And grazing lowers our cost of production. That helps us for those factors that we don’t have much control over,” said Paris.

Unconventional farming - finding new ways that are not out of the textbook and definitely aren’t “your grandfathers way of farming.” It’s an idea that’s also working for a small family farm about ten miles down the road.

Inside a small room, just off the milking parlor on the Grady farm in Oregon, there are a number of awards lining the walls.

Thomas Grady is proud of the work he’s doing to produce high quality milk for his co-op. He’s been milking cows much of his life, but for other farmers. It wasn’t until 2002 that he started milking on his own.

Grady and his son, TJ, milk two dozen cows once a day. Most of their milk goes to the Roth Kase Milk Factory in Monroe and used to make Wisconsin cheese.

This small micro-dairy, as Grady called it, isn’t the norm in Wisconsin. Most farms in the state average about 145 cows per head, according to the Dairy Farmers of Wisconsin. Even though Wisconsin is the Dairy State with 23% of all dairy farms in the country, that number is well below the U.S. average herd size of 234.

“The number of farms keep declining, but the total milk output isn’t declining,” said TJ Grady. “So that is just a trend that shows you the larger farms are getting larger.”

Twenty-eight cows certainly isn’t enough to pay the bills, according to Grady. “There’s no way you can make a living at this job with this many animals,” he said.

Both father and son work eight plus hours a day at a job off the farm, before coming home and taking care of the herd.

Milking once a day is also an unconventional idea on the farm, but Grady said it comes with good reason. It helps to keep his costs down on electricity, dairy chemicals, and feeds.

Working off the farm and then caring for the cows makes for an extra-long day, but for both father and son it’s their passion.

“I always enjoy doing the farm chores more than my day job, but it’s just kinda hard seeing that the day job is the one paying the bills and then you are coming home to the farm,” said TJ Grady, “It takes a special kind of person to devote their life to agriculture and stay in agriculture when such a small portion of the population is engaged in it.”

The family tradition is what ups the ante for so many of these small family farms. Both Paris and Grady beamed with pride when they talked about their children continuing the family business.

“It really makes me proud to have follow the traditions,” said Grady. “I didn’t force him into it. He enjoys the animals and the lifestyle.”

“How exciting to watch Meagan make changes,” said Paris. “And to get some new excitement and some new blood into the farm, you know?”

You can bet the Paris and Grady farms, like so many other Wisconsin family farms, will put every last chip on the table before they fold.

“I’ve enjoyed this for the last 25-27 years and I just think no it’s her turn,” said Paris with a big smile on his face.

Paris, Farrell and the Gradys had some extra training from farming courses.

Paris and Farrell continued their education through the Dairy Grazing Apprenticeship. It’s mission is to provide a “guided pathway to dairy farm business ownership, developing grazing careers, and strengthening the economic and environmental well-being of rural communities and the dairy industry,” according to its website. It’s claims to be the first formal apprenticeship for farming in the U.S. and was “created by and for farmers.”

Dairy Grazing Apprenticeship program has resources, case studies, and how to enroll in its program at its homepage: https://www.dga-national.org/

The Gradys are both graduates of the Wisconsin School for Beginning Dairy and Livestock Farmers. Since 1995, the short course has graduated nearly 500 students and approximately 70 of those took part in summer internship programs. The program focuses on helping students develop a detailed and feasible business plan, building connections with their community to fall back on for questions and help as their farm get started or improved, and make sure students feel empowered to do things “their way” after exploring options.

Nadia Alber is the co-director of the program. She said there has been great success for those that have graduated.

“More than three-quarters of our graduates are currently farming and nearly half of those have started their own business,” said Alber. “The rest are working on and/or managing a farm. Of those not currently farming, a big proportion continue to plan to farm in the future.”

The courses are offered at UW through distance learning and online. Alber said the instructors teach low-input dairy and livestock farming, with a focus on niche markets or added-value products.

“I think this is the way of the future for family farming,” said Alber.

To look at the courses offered and learn more about the WSBDF, visit: http://wsbdf.wisc.edu/