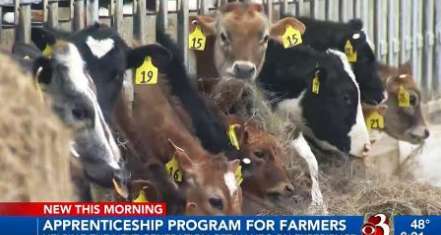 WHITINGHAM, Vt. (WCAX) - Getting into farming, unless it is generationally passed down, can be a tough thing to do. But one group is attempting to make it a little easier for aspiring farmers.

“Well, I kind of grew up liking cows and animals basically,” said Mackenzie Wallace, an apprentice at the Corse Farm Dairy.

“I found out he was a farmer when he was a kid. He grew up milking 100 Jerseys, same type of barn Leon has,” said Wallace.

He graduated high school in New Hampshire and was making money, but found himself relatively uninterested. A push from his stepdad meant a leap of faith.

That’s when Wallace applied for the Dairy Grazing Apprenticeship, a national program.

“Leon was the first person to reach out to me,” said Wallace.

“My daughter Abbie told many people that I was a terrific teacher, and she would add, as long as he’s not your father,” said Leon Corse, with the Corse Farm Dairy.

Leon’s family has been farming land in Whitingham for well over 100 years, and he and his family felt Wallace, their third apprentice, was a natural fit.

“It didn’t take us very long to figure that out.,” said Leon.

The program is modeled after plumbing or electrical apprenticeships and is two years long. There are more than 200 approved mentors in 15 states. It’s hands-on, meaning you’re doing the chores, milking the cows and attending industry meetings.

“So they get exposed to the realities of the things that farmers deal with,” said Leon.

But for Wallace, it wasn’t just a new job, but a vital lifestyle change.

“Good, awesome, amazing: it has changed my life,” said Wallace.

He’s gotten married, learned the ropes of organic dairy grazing, and even landed his own farm to help save in Peacham, Vermont.

But most importantly, he gained a mentor and friend.

“He’s my best friend, that’s how I look at it,” said Wallace.

Wallace is set to head up to the farm in Peacham to begin the transition process on April 25.

Leon says he’s not done and hopes to mentor a few more future farmers before he hangs up his hat.

Leon’s daughter Abbie says watching the apprentices move on gives her hope for another generation of organic dairy farmers.