Growing up on the farm is a formative experience that sometimes draws people back even after years—and careers—away. Apprenticeship can provide that pathway to the dairy farming lifestyle. 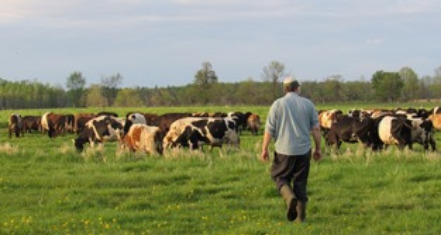 Wisconsin native Tim Clark was living in North Carolina when he felt a longing to come home and try his hand at farming — a move that would be personally satisfying but would come with financial risk.

“So I did what every farm kid does when they don't know which way to go. I took a walk down memory lane,” Clark said.

“Growing up on the farm leaves lasting memories, good and bad, that sustain the test of time. Riding bikes down the farm lane to get the cows home, sitting on the bunk-line feeder as it traveled back and forth feeding cows, swinging with my brothers from the milk pipeline, when Dad wasn't looking…the sounds, smells and feelings all come to life,” he said.

Those memories keep the spirit of farming alive, but it's also a tough business that has shredded a lot of dreams.

The unique opportunities on a family farm often are complicated by issues such as low commodity prices, a lack of available investment capital and sibling conflict.

Clark came home, however, and now farms part time in addition to his full-time job as forage product manager with Dairyland Seed Co.

He and his wife, Danielle, also help on their families' farms near Lomira and Beaver Dam.

“We wouldn't have it any other way. That's the best thing about it,” he said.
Didn't plan to be a farmer

Some people return to farming after they've gained experience that's completely unrelated to agriculture, such as professional sports.

Eric Cates is a ski racing coach in Steamboat Springs, Colo., who's coming home soon to run his parents' farm in Spring Green.

He was on the NCAA national championship ski team at Dartmouth University. After graduating in 2008 with a bachelor's degree in geography and government, he launched his career in coaching.

Now, Cates said, he's satisfied with his accomplishments as an athlete and a coach. He and his wife, Kiley, are ready to begin the next chapter of their lives on the Cates Family Farm, which specializes in grass-fed beef cattle.

“We're interested in starting a family soon, and being that I was raised on a farm, I couldn't think of a better place,” he said.

Raised on a farm in Marathon County, David Galbraith didn't plan on a career in agriculture.

After high school, he worked retail jobs in Wausau before landing a position in the parts department at a Toyota dealership. “I was positive that I would not be a farmer,” Galbraith said.

But while he enjoyed his job at the car dealership, he hated living in the city.

“I sort of lost touch with who I was, in a lot of different ways,” Galbraith said.

He enrolled in Wisconsin's Dairy Grazing Apprenticeship program. Now he's working on his family's farm, wants his own herd of cows, and is pursuing the title of “master grazier.”

“It's going to be my career, forever,” Galbraith said.

Some people raised on a farm struggle with being cooped up in an office, even if they enjoy their job. They want to run their own business and prosper, or fail, by their decisions.

That was the case for Andrea Brossard, co-owner of Brossard Dairy Farm in Beaver Dam, who returned to the family business after working for the Wisconsin Milk Marketing Board and other segments of the agriculture industry.

“What I love about farming is that it's our business. There are definitely tough days, but it's our blood, sweat and tears for us,” she said.

Brossard's father suffered a stroke in 2008, prompting her decision to return to the farm, where she already had been working on the side.

“I wanted to be at the farm full time because it's a passion. It's a passion for caring for our land and animals, it's a passion and an honor to be a third generation in a family business, and it's a passion to provide food for this country. It's really about the love we have for what we do,” Brossard said.

Some people return to a family farm that's profitable and able to support the next generation. Others inherit a business that's probably run its course for a number of reasons, such as debt and not enough income to get through the tough periods.

“Farming is very idealistic, but it's not an easy way to make a living,” said Angie Sullivan, program specialist with the Wisconsin Farm Center, part of the state Department of Agriculture, Trade and Consumer Protection.

The decision to make a living from farming, like any other business, needs to be viewed with a certain amount of caution and skepticism. The Farm Center helps people with those plans.

Sometimes not getting into farming is the right decision, rather than spending years on something that wasn't feasible in the first place.
'New lifeblood'

Still, people return to their roots in agriculture, often with valuable skills and experiences from other careers.

“They're bringing new lifeblood and enthusiasm to the farm,” said Frank Friar, an economic development consultant with the Farm Center.

Dan Scheider graduated from the University of Wisconsin-Platteville in 2002 with a degree in agribusiness. He worked in banking a few years before returning to his family's dairy farm in Illinois.

Last week, Scheider was pumping air into a manure pit and doing routine equipment maintenance. Working at the bank would have been much more comfortable.

On the farm, however, he gets to see calves born in the spring, corn sprout up in the field, and the results of his labor harvested in the fall.

Once, when Scheider was on a tractor, the bank called to ask if he wanted his job back.

“They just wanted to make sure I had done the right thing,” he said. “But I have never had any real regrets.”