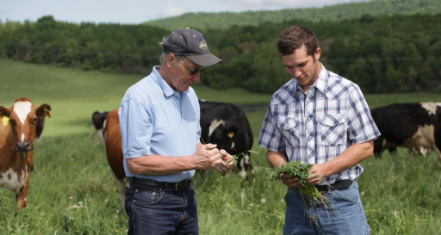 By Nate Jackson
The Country Today

COLFAX — Charles Flodquist knew that, at some point, he would retire from dairying. But with all three of his children taking jobs off the farm, Flodquist’s goal of turning his grazing operation over to the next generation would need to take a less-direct route than some farm transitions.

Not wanting to sell to the highest bidder only to see what he had turned into a successful dairy-grazing operation develop into something else, Flodquist turned to the Dairy Grazing Apprenticeship program for help.

“He is trying to ensure that the business that he’s developed continues,” said Charles’s wife, Karen. “He’s developed raw land and made the paddocks and trails and improved the soils. He’d like to see that continue.”

Flodquist attended a group session when the River Country Resource Conservation and Development Council was trying to decide whether the group wanted to coordinate the Dairy Grazing Apprenticeship program in west-central Wisconsin. There he ran into Joe Tomandl, the executive director of the apprenticeship program, who mentioned a meeting he had at a UW-River Falls job fair where he came away impressed with a UW-River Falls student, John Richmond.

“Joe made some comment about having met some kid at River Falls he wished he could hire,” Flodquist said. “I asked for John’s number after the meeting.

“That’s about as good a recommendation as you can get.”

Flodquist gave Richmond a call, and soon the two were discussing their plans. Shortly thereafter, they agreed to the apprenticeship with an eye toward Flodquist selling the farm to Richmond if everything went as planned.

“We talked through our goals and what we wanted to see happen,” Richmond said. “I liked what I saw, and he must have liked what he saw.”

Richmond graduated in the spring of 2015 with a degree in ag business with a dairy emphasis. Two days after graduation, he got his start on Flodquist’s Chippewa County farm.

In June, after two years and 4,000 hours in the program, Richmond completed his apprenticeship.

“These are two people I am very, very proud of,” said Mary C. Anderson, River Country RC&D president and DGA education coordinator for Richmond and Flodquist. “One has decided to take the time and the effort and the energy to educate the next generation on how to be profitable by really controlling input costs, costs of production, and one is a young man who dedicated himself to get a four-year college education and then jump into a program that set him up to move into a grass-based dairy.

“John recognizes farming is a lifelong learning opportunity, and Chuck’s an excellent teacher.”

Flodquist began grazing cattle on his previous farm in Minnesota in 1992. He and Karen moved their operation to the Colfax area 16 years ago after running short of land in Minnesota. In Chippewa County, Flodquist took what was a dairy/​cash-cropping operation and converted it into his dairy grazing farm.

“It’s not all flat land, but it’s mostly silt loam soils,” Flodquist said. “I came from a mostly sand farm before. I thought I’d died and gone to heaven when I came here.”

Flodquist’s grazing plan was one of the first plans written in Chippewa County after the Natural Resources Conservation Service began funding grazing as a conservation practice, Anderson said.

Flodquist put in lanes between pastures and around hills to ease movement for cattle on the 400-acre farm.

“The buildings are basically in the center of the property,” he said. “I can walk cows to every acre on the place, which is a big deal.”

Flodquist rotates paddocks every 12 hours, putting cows on a pasture first, followed by dry cows and heifers for another 12 hours. He then allows the pastures to rest for about 30 days before being grazed again.

“We’re mimicking what Mother Nature was doing with the buffalo, but instead of predators keeping everybody bunched up, we’re using fence,” Flodquist said. “It’s a very efficient system.”

While he had spent time on other types of dairies, this was Richmond’s first experience with rotational grazing.

“I like this system,” Richmond said. “There are things where I ask, ‘Chuck, why don’t we do this? Why don’t we do that?’ But I’m only trying to perfect a pretty darn good system.”

Flodquist brought 50 cows with him from Minnesota and built his herd from there. He now milks between 155 and 180 cows twice a day in a swing-15 milking parlor. His herd is a mix of Holstein, Ayrshire, Montbéliarde, Fleckvieh and Normande.

Now that Richmond has graduated from the Dairy Grazing Apprenticeship program, the plan is for Flodquist to begin transitioning the farm to Richmond, beginning with the cows, which Richmond will buy Jan. 1.

“We’ll start with the most liquid thing first,” Richmond said.

“I’m slowly backing away,” Flodquist said. “I’ll be called a consultant for a while.”

After buying the cows on Jan. 1, Richmond will follow up by buying the machinery before turning to the buildings and the land after each previously purchased asset is paid off.

“The theory is that you get the cows paid for and the cows will pay for everything else,” Flodquist said. “That’s what generates the income.”

Richmond already started making decisions on the farm, picking out a Guernsey bull in late June.

“I’m hoping to put him with some of the bigger cows and see what happens,” Richmond said. “I want a beef cow that milks. I want an animal that, at the end of her useful life in the milking parlor, I want to make some money off her when she goes to market.”

The Dairy Grazing Apprenticeship consists of 4,000 hours of training over the course of two years.

“The first year was showing John what needs to be done. The second year, I was kind of starting to back away and just watching John,” Flodquist said. “It’s a mindset. You have to step in and say, ‘Oh, that’s my responsibility. I have to figure out what’s wrong.’ ”

Of the 4,000 hours, 3,712 hours are employment and mentoring under an approved master dairy grazier and 288 hours are instruction designed to enhance the on-farm training. The master and apprentice are required to complete the DGA training manual, which lays out the competencies that must be met in order to own and operate a managed-grazing dairy farm.

Anderson met with Richmond and Flodquist monthly to go through the training manual.

“We’d cover all the things they’re supposed to learn and discuss,” Anderson said. “We talked a lot about what’s going on on the farm and make sure that every topic came back to a learning and a teaching opportunity.”

Having the support of the Dairy Grazing Apprenticeship program is making the farm transition go more smoothly than it may have without, Karen said.

“(Anderson) supported communication by the routine visits,” Karen said. “Having someone else involved makes that part of the program succeed. You can have all the really good elements of the program, but if you are not talking and working through stuff, you’re not going to make it.

The DGA program was created in 2010 through a partnership between GrassWorks and the Wisconsin Department of Workforce Development’s Bureau of Apprenticeship Standards and was incorporated in 2013. DGA is now an independent nonprofit organization with a National Apprenticeship. The program has 125 master farm sites in nine states with more than 200 apprentice candidates.

The Dairy Grazing Apprenticeship starts with a six-month probationary period to make sure the mentor-apprentice relationship is working and the experience is what both had expected.

“At the end of the six-month probationary period, we sat down and said, ‘Well, what do you guys think?’ John’s comment was, ‘I’m living the dream,’ ” Anderson said. “That’s a pretty good affirmation that he wants to continue here. Not all master-apprentice relationships end that way.”

Had that not been the case, it would have been back to the drawing board for Flodquist. But Anderson wouldn’t have considered the experiment a failure.

“If we can provide anyone who wants to get involved in dairy farming a snapshot of what the reality is, and if we can prevent them from taking out hundreds of thousands of dollars worth of loans only to find themselves down the road facing a bankruptcy, facing a crisis because of unrealistic on-farm expectations, that’s a success for the program,” Anderson said.

“You really do have to like this job to be successful at it,” Flodquist said. “Not everyone wants to do this.”

As it was, the pair was happy with the relationship and where the opportunity was heading, and they decided to move forward with transition plans.

“This is a unique relationship with a lot at stake,” Anderson said. “Big mistakes can have long-reaching ramifications on the livestock, on the landscape. In an environment where the margins are so incredibly tight, expensive mistakes can’t be afforded.

“They’ve spent a lot of time trying to come up with a plan that works for both parties. We started talking about a transition action plan last October. They’ve been very cautious, which is critical to the overall success of what they’re trying to do.”