A new trend could mean new opportunities and increased demand for managed grazing dairy farmers: milk that contains only the A2 type of beta-casein protein, rather than the A1 protein commonly found in regular milk. 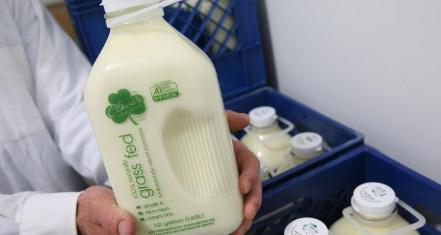 By Rick Barrett of the Journal Sentinel

East of Athens, in Marathon County, Joseph Zaiger's herd of about 40 cows produces a type of milk that could shake up the dairy industry.

It's like conventional milk but doesn't have a beta-casein protein that some studies have said makes milk less digestible, almost intolerable, for a large number of people. That is different from the condition known as lactose intolerance, which Zaiger's milk doesn't help.

The technical term is “A1 beta-casein free,” meaning the milk from Zaiger's Clover Meadows farm lacks that particular protein found in most milk.

This isn't genetic modification; rather it's a process of breeding cows with the desired trait or finding them in a regular herd.

In the U.S., there aren't many dairy farms where all the cows produce A1-free milk, yet the practice is popular in Australia where sales have outstripped organic milk.

Clover Meadows might be the only Wisconsin dairy farm that's focused on A1-free, according to some experts who have been in the dairy industry for decades.

It's so new here, most people haven't even heard of it, said Blair Sawall, a dairy farmer from Clintonville.

Sawall said he might build a herd of cows that produces A1-free milk, should the U.S. market for it gain much traction.

“Like anything else, the first guys who get in on something are the ones who are going to profit,” he said.

Up to about 40% of the cows in a typical U.S. dairy herd are A1-free, according to some estimates, although only a few farms do much to capitalize on it.

desired trait. The farm's milk is sold through Trust Local Foods, near Appleton, which markets it to stores in Green Bay, Appleton, Fond du Lac, Ripon, Kohler and Grafton.

Trust Local Foods handles 40 cases of Zaiger's milk a week, with six half-gallon bottles to a case. One store, in Appleton, sells the milk for $5.50 a half gallon including a $2 deposit for the glass bottle.

The milk, sometimes called “A2” because it contains the A2 beta-casein protein but not A1, is popular with people who have milk digestion issues, said Trust Local Foods founder Fred Depies.

“I don't think A2 is a huge market at this point, but we are seeing growth,” Depies said.

Zaiger's milk isn't homogenized, and the flavor is richer and more like the milk from years ago, according to Depies.

“Once we get people to taste it, the milk pretty much sells itself,” he said.

Recently, the a2 Milk Co., of Australia, entered the U.S. market through a handful of American farms, including a large operation in Nebraska.

The a2 brand is available in California and Colorado, according to the company whose U.S. headquarters are in Boulder, Colo.

The company's milk isn't yet available in Wisconsin, said Blake Waltrip, CEO of the U.S. operations.

“We are looking at all of the (U.S.) markets. But my goal, from a strategic standpoint, is to get the formula right for connecting with consumers in California first, and then expand on a national basis,” Waltrip said.

The Australian company was founded in 2000 by a New Zealand scientist and a wealthy farm owner. The company says its products are now sold in every major grocery chain in Australia.

Waltrip said the farms that supply a2 Milk Co. with milk receive a significant premium in the price compared with conventional milk, although he declined to specify the amount.

A higher milk price, and increased milk sales, would be welcomed by U.S. dairy farmers struggling to remain profitable.

Sales of conventional drinking milk have been plummeting for years to some of the lowest levels since the early 1980s.

Changing consumer habits, more drink choices and a lack of dairy product innovation are behind the steady decline in milk sales, according to the industry.

Through A1-free milk, Waltrip said, “we feel strongly that we can bring consumers back to milk. The premium milk category is a growth area in the industry.”

Many health claims have been made about A1-free, with some advocates saying the A1 protein in conventional milk has been linked to diabetes, autism and even schizophrenia.

However, a study published in the European Journal of Clinical Nutrition found no definitive evidence that the A1 protein has an adverse effect on people.

Consumers should be skeptical of the health-benefit claims, said John Lucey, a professor of food science at the University of Wisconsin-Madison and director of the Center for Dairy Research.

One thing that A1-free won't help with, Lucey said, is lactose intolerance, a condition in which the body has difficulty with lactose, a sugar found in milk.

Still, some in the dairy industry are hopeful that A1-free will find a niche in the U.S. as it has in Australia.

It could be a successful business model for American farms — including sales of A1-free products overseas, said Pete Hardin, publisher of The Milkweed, a dairy industry magazine in Brooklyn, Wis.

“I feel very strongly that A2 is the future for the dairy industry,” said Hardin, a shareholder in the a2 Milk Co.

The dairy industry contributes about $43 billion a year to Wisconsin's economy, according to state figures.

Currently, however, farmers are struggling with a farm-milk price that's so low they are losing money.

Zaiger doesn't expect to get rich from A1-free, but it helps that he bottles his own milk produced from grass-fed cows that aren't treated with growth hormones or antibiotics. He also sells yogurt made from his A1-free milk.

“I would like to keep our farm about this size. It works nicely for our family,” he said.

“We wanted a product that people really couldn't get anywhere else,” he said about A1-free in his area.

“This is the cutting edge of a trend,” Kastel said about A1-free products.