Graze Magazine checks in with DGA graduate, John Richmond, who took over the dairy farm of Master Dairy Grazier, Charles Flodquist, in early 2018. 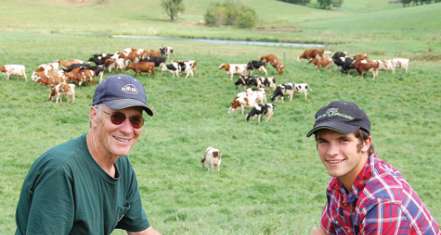 Colfax, Wisconsin — After completing the Dairy Grazing Apprenticeship (DGA) program and earning his Journeyworker status, John Richmond II (October 2016 Graze) has been running Chuck Flodquist’s grass dairy on his own since Jan. 1, 2018.

Chuck, who as the DGA Master Grazier served as John’s mentor, has moved off the farm, but still comes back to work.

“I work twice a week since then, so I’m semi-retired,” Chuck explains. “John was nice enough to let me help him a couple times a week.”

John, 25, says the DGA program gave him an ideal entrance to dairying that he would not have had otherwise. It also allowed Chuck and his wife, Karen, to move into retirement and pass on the dairy they built to an interested and hardworking young person.

From Chuck’s perspective, the DGA was a useful tool in the process.

“I have nothing but good things to say about the Dairy Apprenticeship Program,” Chuck says. “I’m happy with this transition.”

John says the transition was pretty smooth and that the DGA process helped him do it well. His first year working with Chuck was devoted to learning everything he could about the process, but the second year was when John started practicing management.

“He let me take the reins,” John describes. Chuck still gave the OK when a check had to be written, but John was involved in making day-to-day decisions on the dairy.

John’s third year, 2018, was when he took complete control of the farm’s management. He says it was a shock to assume so much responsibility, but adds that it was much better than it could have been because he already had some decision-making experience.

John moves the cows after every milking (twice a day) and manages the pastures with 28- to 35-day rest periods with a leader-follower (milking followed by dry cows) system. The stock water is at the barn, so the milk cows get to drink twice a day when they are home for milking, and the dry cows drink once in the middle of the day between milkings.

He milks between 70 and 200 cows during the course of the year, culling heavily going into the winter based on how much feed he has on hand. When spring comes, John freshens incoming two-year-olds and his numbers rise again toward 200 head milking.

This past winter he did not feed any grain to the milking herd while feeding baleage and corn silage, but this spring started feeding 4 lbs. per day in addition to baleage and 30 lbs. of the silage.

Chuck thinks John is doing well, especially considering the circumstances. “It wasn’t the most opportune time to start farming,” he explains. “It’s a tough year. He’s making it, and that’s saying something.”

Chuck says John is doing well because his cost of production is low, which has been important with conventional milk prices being so low.

Paying as he goes
John sticks to a system to ensure that he pays each bill as it comes. He plans the expenses so that each milk check will take care of one of the bills. For example, when he plants corn, one paycheck pays for the spraying, and one pays for fertilizer.

He believes it is important to take things one step at a time and to limit debt. “You can’t overextend yourself,” John emphasizes. “I couldn’t really do it any other way.”

John purchased the cows on Jan. 1, 2018, and leases the land and equipment. This is in keeping with his focus on having manageable debt, since all he has is a loan on the cows.

As he moves forward, John would like to buy the land as well, but that is at least seven years off. He is beginning to buy the equipment, one piece at a time.

John is dreaming of ways to diversify within his regenerative grazing system, perhaps by adding chickens, goats or sheep, but that is not very close on the horizon.

For now, John is satisfied to continue making money on grass as he gains experience in all aspects of dairying.