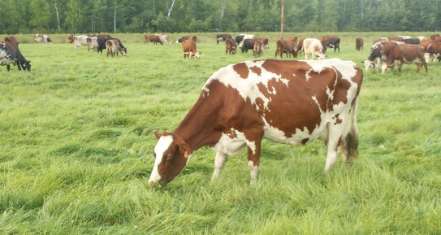 But the average of butterfat percentage on all Organic Valley dairy farms, which varies from a mid-winter peak of more than 4.2 percent to a summer reduction of 3.7 percent, he said. That results in an overall average variation of .45 percent. That’s greater than the average cow in the United States as reported by the U.S. Department of Agriculture, which shows a .25-percent variation. Grazing is the reason for the additional reduction that occurs among organic dairy herds.

It would be an achievable goal for organic dairy producers to limit their butterfat reduction to .25 to .3 percent, Brickner said. Butterfat depression that accompanies grazing-based dairies isn’t limited to the United States. Australia, New Zealand and Ireland rely heavily on grazing; producers there experience the same degree of reduction as Organic Valley producers.

“Now that butterfat is highly valued these other countries and U.S. producers are looking for ways to minimize that drop,” he said.

When trying to maximize butterfat levels in the winter feeding season, breed choice matters a great deal along with how winter rations are formulated. And cow comfort is a factor.

“Cows that aren’t crowded and have feed pushed up to the manger many times during the day have higher butterfat percentages in their milk,” he said.

“When cows are overheated and their tongues hang out they aren’t swallowing saliva or chewing their cud,” Brickner said. “Cow saliva has a lot of bicarbonate, which buffers the rumen and aids in fiber digestion and butterfat production.”

Milkfat depression is an active process caused by a compound called T10-c12 conjugated linoleic acid – what he refers to as “bad.” It’s a fat made in a cow’s rumen that acts as a signal to cells in the udder to reduce butterfat production.

A small chemical change creates the difference between the two. A rumen that’s stressed by short pasture with reduced fiber and excessive protein, along with a low pH, will have more bad conjugated linoleic acid. That’s further exacerbated by heat stress.

“The signal goes straight to the udder that less butterfat be made,” he said. “It also works in the fat cells throughout a cow, telling them to make less fat. If you have trouble maintaining body condition in the summer it’s definitely a related issue.”

Brickner suggests moving away from early-grazing-management models based on New Zealand, where swards are typically 6 inches tall when cows graze them. Those pastures tend to have excessive protein and reduced fiber. Instead producers should lengthen the pasture rest period so swards are still vegetative but approaching 16 inches tall. Those pastures are typically 18 percent to 20 percent protein with neutral-detergent-fiber levels of about 50 percent.

Use leaf counting to assess pasture grasses. Tillers are the portion of grass where the leaves grow from. When a grass plant is at the three-leaf stage, protein begins to moderate and fiber increases. That allows the plant to stay in the rumen longer, he said. Analyze a minimum of 10 plants to check for leaf development.

When grasses flower out it can be a problem because feed quality is quickly reduced. A grass plant with a flower stalk produces a hormone that goes to the base of the plant, inhibiting new vegetative green-leaf tillers from developing until the seed matures. That can take until August depending on the grass species, thus robbing graziers of successive rotations through the pasture if nothing is done. One way to remove the hormone influence is to use increased-density grazing to force removal of the flower stalks by grazing and trampling.

Mowing pastures is another way to remove growth and let the plants start over in a fully vegetative state. Although mowing pastures right after grazing is common, it can also be done before allowing the cows in a paddock. Cows can pick through the pre-wilted cut pasture and eat until they’re full. Brickner said it’s best to use a sickle bar or disc mower, and to lay the pasture in a simple windrow.

“Pre-mowing can get you through the two- to three-week period when grasses are actively flowering,” he said.

Include 5 pounds of good-quality dry hay in the ration throughout the grazing season for consistent rumen health, he said.

His presentation was part of a Dairy Grazing Apprenticeship virtual roundtable discussion.