Congratulations to the Walter Family! Nate and Angie are approved Master Dairy Graziers and Angie is a DGA Education Coordinator in Central Minnesota. 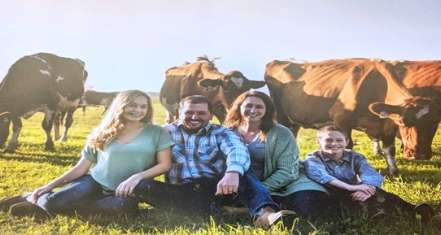 Minnesota Farm Families of 2020 are being honored virtually this year, celebrated in an online video tribute led by University of Minnesota President Joan Gabel and available 1 p.m. Thursday, August 6. A U of M Extension Committee chooses one family per county based on their commitment to their communities and for enhancing and supporting agriculture. KMRS will be spotlighting a few of this year’s honorees this week.

The Pope County Farm Family of 2020 is the Walter Organic Family Farm. Walter Organic Family Farm was purchased in 1935 by Kenneth and Mildred Walter. The farm comprised 160 acres and the family had six milk cows, hogs, and chickens. In 1975, Kenneth died and his son, Fred, purchased the farm. He milked 40 cows and raised hogs. Fred’s son, Nate, and his wife, Angie, purchased the farm in 2002.

Nate and Angie currently milk 100 crossbred cows in a swing 10 parlor. The cows are rotationally grazed on pasture. Since buying the farm, the Walters have added 110 owned acres and rent another 100 acres. They also raise organic chickens and organic laying hens. The Walters use cover crops to improve soil health. Nate and Angie’s farm was certified organic in 2013.

The Walter family is very involved in Pope County 4-H. Nate and Angie are the 4-H dairy livestock superintendents at the Pope County Fair. Their children, Laureen and Levi, are members of the Villard Livewires 4-H Club, where Laureen serves as president. The Walters children show dairy cattle at the fair and Levi also shows beef cattle and poultry. Laureen started an FFA dairy judging team at her school.

Angie is employed part-time by the Sustainable Farming Association of Minnesota’s Dairy Grazing Apprenticeship program. Nate serves on the executive board of Organic Valley. The Walters have hosted several pasture walks on their farm; they’ve been involved in the Tools for Transition Project with Extension and they’ve participated in several research projects with the University of Minnesota West Central Research and Outreach Center.