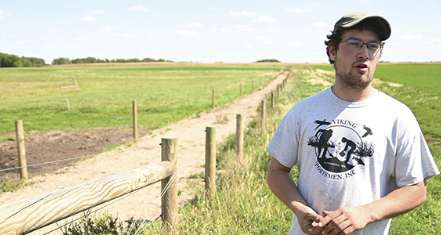 BRANDON, Minn. – This year has been anything but normal for farmers across the Upper Midwest. For one young farmer it is all he has ever known, and adapting to the drier conditions is nothing out of the ordinary.

“I’m learning, and I learn better trying,” Jack Schouweiler said. “This year has been different but I think it’s going to hold up pretty well.”

Schouweiler and his mentor, Ben Wagner, hosted a farmer-led pasture walk for the Sustainable Farming Association and Dairy Grazing Apprenticeship on Sept. 9 at Schouweiler’s farm in Douglas County near Brandon.

The 22-year-old farmer milks 70 cows, while he and Wagner together manage the land associated with the organic farm.

During the field day, Schouweiler and Wagner led discussions on pasture management, including intensive grazing strategies and ways to promote soil and plant health. They also talked about the opportunities that were available for the young farmer to establish his dairy herd.

“I’m really proud of (Schouweiler) for taking over the operation,” Wagner said. “I started farming organically 20 years ago, and moving forward, (Schouweiler) is going to make things better here.”

Schouweiler houses his herd in two groups at farm sites less than one mile from each other.
Field day attendees toured the farm site where Schouweiler milks 35 cows in a swing-7 New Zealand-style parlor and grazes 80 acres of pastureland.

When Schouweiler purchased the farm site, it was used for heifers and dry cows. After remodeling the milking facility, he began milking cows May 1.

“I milk the cows all by myself,” Schouweiler said. “Right now, it takes me almost seven hours morning and night to do chores. Once the cows are all here, it should take me six or seven hours total to do all the chores.”

The remainder of Schouweiler’s herd is housed in Wagner’s tiestall barn until their cooperative’s quota is lifted and Schouweiler can combine the milk into one bulk tank.

The parlor, built in 2019, is constructed of mostly used equipment and with space available to expand to a swing-15 in the future. “It’s nothing fancy, but it has worked really well,” Schouweiler said.

Cows are milked twice a day and then housed on an outdoor bedded pack. Eventually, Schouweiler wants to build a roof over the area, but for the time being he uses corn stalk bales as a wind break. The animals then have access to paddocks that vary from 7 to 15 acres. Currently, the pastureland houses 35 cows and 35 heifers but is large enough to accommodate the entire milking herd without any youngstock.

“They’re out here all summer, and we use the pastures for feed and supplement with TMR,” Schouweiler said.

Wagner agreed. “We usually graze right up to the frost,” he said. “There’s silage and TMR year-round. We mix one batch of feed to feed both herds.”

To maximize the pastures, Schouweiler put in fence lines, waterlines and water tanks, as well as established walkways for cows and equipment to use. The total cost of these projects was approximately $73,000, but each improvement was partially funded by Environmental Quality Incentives Program dollars from the United States Department of Agriculture’s Natural Resources Conservation Service and Clean Water Funds from the Minnesota Board of Water and Soil Resources.

The fence stretches from one tree line to another and around a swamp. Schouweiler uses back crosswire to move the animals through the paddocks, allowing pastures to rest for more than 30 days.

“Fencing has paid for itself this year around the low areas,” Schouweiler said. “I’ll probably never graze the low ground again, but they’ve been out there all summer.”

When Schouweiler opened his pastures this spring with the forages about 5 inches tall, he implemented a strict grazing rotation to establish the paddocks. “If you start it off as a horse race and then go slower, it helps thicken up and matures quicker,” he said. “We never stopped grazing here. I have enough acres here that we could do that.”

The pastures are established with grass varieties such as meadow, brome, canary and more, as well as some paddocks having oats, sorghum, alfalfa and clover.

“I’ve been able to extend the paddocks for about 45 days,” said Schouweiler, who moves the cattle when the grass is about 4 to 6 inches above the ground.

While Schouweiler has plenty of pasture to work with, he is planning on renovating about 10% of his land each year to help rejuvenate the soil. “I’m close enough that I can dig up pastures and put corn silage on,” he said. “There is enough here that we can take it out of production and do something else with it.”

Within each paddock is at least one water tank connected to a water line. One paddock has access to three water tanks just given the route of the fence line.

“I really like that I don’t have to move them around,” Shouweiler said about the water tanks.

Wagner agreed. “I used to do that with my heifers all the time, moving tanks,” he said. “Now, I can just open the gate and be done. It saves so much time and energy.”

Between the systems Schouweiler invested in and the management practices he has adopted for his dairy herd, the young farmer is pleased with how his dairy farming career has begun. Wagner is equally pleased with the transition as he watches a new generation take on the responsibilities.

“(Schouweiler) loves cows; he has a natural instinct,” Wagner said. “Farming looks different today than it did when I started, but we’ve come to agreements to ensure the farm’s future.”