Organic Valley Farms in Southeast Minnesota Glad to be Organic

Minnesota DGA Mentors, Zweber Family Farms of Elko and Buck Dairy Farm of Goodhue, have been with Organic Valley since the start of a boom for the entire organic industry. 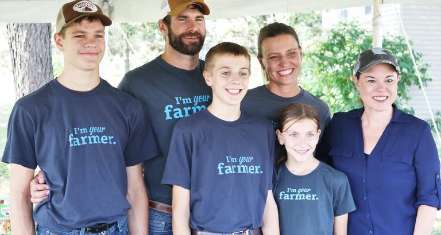 GOODHUE, Minnesota ― Members of the nation's largest cooperative of organic farmers feel fortunate they became specialized and stayed small during a time when many producers doubled down on expansion.

As conventional dairy markets have turned more unstable in recent years, the market for organic milk has been stable. That's good news for the 1,800 farmer-owners of Organic Valley.

The cooperative says in 2020 it had its fourth consecutive year of total sales exceeding $1.1 billion, and a “significant improvement in net earnings from ongoing operations,” compared to 2018 results. Organic Valley recorded a net loss of $2.5 million in 2018 and improved to $4.5 million in 2019.

Organic Valley members Dennis and Ruth Buck are the third generation to farm their family's land in Goodhue County, where they currently milk 120 cows. They purchased the operation from Dennis' mother in 1998 and made the switch to organic a year later. By 2003, the Bucks were selling milk to Organic Valley.

Two robotic milking machines were installed at the farm in 2015 in order for the couple and their six children to be the operation's only workers. Three of the couple's six children are now interested in becoming the fourth generation to farm the land, after they're finished with school. Ruth Buck said even if that does happen and their operation grows, they won't expand the size of their dairy herd.

“We are committed to that 120 — and really couldn't go bigger because our land base matches that,” said Buck. “But with three possible kids back, we might have to do something else — it just won't be expanding the dairy.”

Her husband runs the farm side of the operation and she does all the accounting. Buck said the stability of the market for organic milk is what influenced their decision to get into the market.

“It stabilized how big we were going to get, because two robots can only milk about that many cows,” she said.

The prices for conventional milk weren't cutting it for the couple in their first year running the operation.

Ruth Buck said after watching her husband work dawn to dusk every day to earn “about $2,500 at the end of the year,” she started thinking of ways they could make an operation actually work financially. Her idea at the time was to scale up — they had 100 cows at the time.

“He was adamant that he didn't want to manage people,” she said of Dennis Buck. “He wanted to stay the size that we were and somehow make it that at that point.”

The couple started talking to a neighboring organic operation to find out what it took to get certified, and if the industry gave producers a fair shot.

“The more we asked questions, the more we were like, this is how we want to farm,” she said.

The couple's children were young at the time but they were thinking about opportunities for them in the future. On their way back from an organic farming conference in La Crosse, Wisconsin, they decided it was time to go all-in on organic, because if they didn't, the transition wouldn't work.

By 1999, the Bucks were transitioning to organic, after only a year raising conventional dairy.

“One bad year was all I could handle,” said Buck.

Getting certified organic and keeping that certification is a big undertaking for the small operations that take it on, said Buck, and if challenges do arise it often comes during inspections.

“It's quite a lengthy inspection when they come once a year, and (third-party inspectors) can be at your farm from six to eight hours, checking every pasture and going through all your paperwork for the year,” she said. “It's necessary to make sure you either grew the crops or bought the crops organically to feed what you have on the farm.”

In 2003 in the early years of their transition, the Bucks had their only misstep which was caught in the inspection process.

“They literally go through every ingredient of every input, or every seed you use,” she said.

That year they had unknowingly used a seed that wasn't permitted. In an inspection process there can minor incompliances and major incompliances, and their mistake was a major.

“Those fields where that seed was put into, we had to re-transition them for three years,” she said, forcing them to adapt to have enough feed for the cows. “I think that was actually a really good thing to happen to us.”

She said it not only taught them the strictness of the process but to be prepared for an alternative to what they planned for. Be ready for things to go wrong, like this year's dry weather.

“As an accountant, I always say you should budget for the fact that at least once every six years, you're gonna have feed that isn't good,” she said. “Plan for it, and save up for it — because with the weather, that's how it is.”

After almost two decades of producing and selling organic, Ruth said she doesn't know what their life would be like if they wouldn't went down the other road of expanding.

“Organic has been a blessing for us — and truly was a good fit for our family.”

Another Organic Valley member farm in southeast Minnesota is Zweber Family Farms, which has been in production since 1906 in the rolling hills of Scott County. The town of Elko where the family has always farmed is now more subdivisions than it is crops.

Fourth generation farmer Tim Zweber said the farm has its roots in dairy but also sells organic beef, chicken and pork. In the fastest growing suburb of the Twin Cities, he said they've found a local market of families who've moved to the area in recent years.

He said they've been with Organic Valley ever since they transitioned to organic, in 2007.

“It was kind of about that time that organic was really ramping up,” he said. “And the profitability was good because the market was growing really well.”

Zweber credits the founders of Organic Valley in the '80s who put in the leg work to make the co-op into something that could grow itself over time. He said up until recently, the demand for organic continued to grow.

“It's kind of leveled off more now,” he said. “The market is more mature than it was back then.”

But Zweber doesn't think the organic industry is heading down from here. Even if there is a slowdown in demand, he prefers selling product in a market that's nothing like the conventional one.

“In the conventional world, it just takes one year when we have a lot of milk, and all of a sudden it's all on sale,” Zweber said. “Just give it away for a dollar a gallon, and never mind what this will do to the market.”

Like the Buck family, Zweber said he feels better off as an organic farmer because the market can be understood and predicted. Unlike the organic market, the conventional side is “based on nonsensical government calculations,” he said.

“The government is really heavily involved in how they figure out the price of conventional milk, and there's only so many big processors and they're in that mix, too,” he said. “It's all a really strange system that I'm glad I'm not in.”