Managed grazing and organic certification helped the Scott and Lucy Adank save their farm. Now the next generation–son Ryan, 21–is preparing for his career in dairying, having recently completed a formal Dairy Grazing Apprenticeship at his home farm. 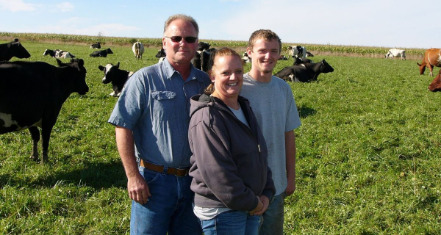 STRATFORD, Wis.–The Adank family is in transition at Pastureland Dairy near Stratford. Scott Adank is working as a school custodian, in large part for health-insurance benefits. Lucy Adank has scaled back her off-farm hours to help their son milk 78 crossbred cows twice daily. While labor-and-management changes are underway, one thing is constant – the cows are on pasture and, the Adanks maintain, healthier for it.

In 1994, Scott Adank quit a good-paying job as a hatchery manager in Rochester, Minnesota, to dairy farm near West Concord, Minnesota. With both having farm backgrounds, the Adanks wanted to raise their children on a farm. They owned 60 acres, rented another 80, milked 40 cows and, Scott Adank said, “struggled miserably.” In their crop-farming area, land was tight. They utilized a farmer-linking initiative to search for a dairy in the Dairy State, where they saw a better future for milking cows. They moved in 1996 to a farm in Marathon County, Wisconsin, bringing cattle with them. They then boosted their herd size from 40 to 60 cows.

“But we were still struggling financially,” said Scott Adank of farming conventionally under the weight of debt.

Their banker suggested exploring rotational grazing, which the Adanks did in 1998 with the help of grazing guru Paul Daigle, the land-and-water-program director with Marathon County Conservation, Planning and Zoning.

“Grazing turned it around for us,” Scott Adank said.

He said it cut costs, improved herd health and created a more manageable workload. With Lucy Adank tending to their five children at the time, not just cows needed caring.

“The irony was we moved four hours from where we were,” Scott Adank said. “We were within 5 miles of an established grazing farm that we didn’t even know was there. We hadn’t heard about (managed grazing).”

Today they operate 310 acres, of which 185 are owned. They grow no row crops. They feed 100 percent forage-based no-grain diet to their predominantly Milking Shorthorn 95 herd, which they’re in the process of downsizing somewhat by selling bred heifers. Scott Adank said being certified organic created the situation – because their cows are staying longer in the milking string.

The Adanks saw the Dairy Grazing Apprenticeship program as an opportunity for their son to acquire additional schooling. The independent nonprofit provides national apprenticeship under the umbrella of the U.S. Department of Labor’s Employment and Training Administration. The program addresses barriers to farm ownership for aspiring dairy farmers. It creates options for existing farmers to develop employees, to possibly expand their dairy-grazing business or to transfer the farm upon retirement.

An apprenticeship consists of 4,000 hours – more than two years of combined on-farm employment and mentorship, said Joe Tomandl III, the program’s executive director and a Medford, Wisconsin, dairy farmer. An apprentice works under an approved Master Dairy Grazier, receiving almost 300 hours of related instruction. Apprentices earn while they learn. Ryan Adank said his apprenticeship enabled him to learn more about dairy management than he would have working day-to-day on the home farm.

The Adanks again credit their lender at Stratford Bank for what they said was more good advice – the suggestion to acquire organic certification, which they did in 2006. Today they ship milk to Organic Valley. Their milk has also been certified grass-fed since 2013. Both certifications have resulted in high milk prices.

The family said the transitions were easy. The only herd-health challenge they faced was an occasional milk fever when pre-fresh cows were on spring pasture. They now keep cows off lush pasture until after they freshen. When a cow contracts mastitis, they hand-strip and feed the milk to calves. Calves are fed whole milk for four months, along with pasture or dry hay.

The cows in milk are the first to graze all paddocks and are moved to fresh grass twice a day. Scott Adank said he measures ideal grazing height with the tops of his 10-inch rubber boots.

To improve pastures, the Adanks use their no-till drill to inter-seed festulolium and red clover into native quackgrass-and-bluegrass pastures. They utilize baleage, bags, silos, and round or big squares of baled hay. They diligently soil-sample pastures and apply organic-approved soil amendments as called for.

Scott Adank, left, and his son Ryan Adank discuss pasture condition. With no grain or corn-silage, the herd must glean all of its nutrition from pasture and hay. Pasture fertility is closely monitored

Cows have been milked since 2003 in a home-built double-10 low-line parlor. The family milks with five units a side and switch side-to-side on the same side. They had started milking Holsteins, but due to the smaller stature of their now-mostly Milking Shorthorn cows, 12 cows will fit comfortably on each side.

In the winter cows come and go at will from bedded-pack hoop barns. They are fed a haylage-dry-hay blended total mixed ration in an inside bunk, and baleage outside. To better maintain body condition in the winter, the Adanks close their barns tighter than they previously did when they were feeding corn silage. Not including milk fed to calves, per-cow production runs 10,000 to 12,000 pounds.

“The simpler we’ve made it, the better the results for animal health and soil health,” Scott Adank said. “And we’re paying more in income taxes, which is also a sign it’s working.”

Jane Fyksen writes about crops, dairy, livestock and other agricultural topics; she is the crops editor for Agri-View based in Wisconsin. Email Jfyksen@madison.com to contact her.