As experienced dairy farmers age and retire they are passing on their knowledge to the next generation, and an innovative apprenticeship program is formalizing the process. 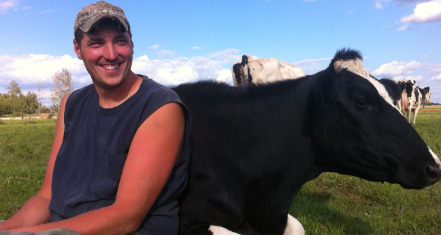 If you’ve never heard of the term dairy grazier, the first thing you need to know is that these farmers are not afraid to go against the grain.

During the 1980s and 90s, when most dairy producers began to confine their cows and switched from grass to a grain-based feeding system, others opted to up their grazing game instead. They looked to places like New Zealand, Austria, and the Netherlands for models and used managed (rotational) grazing to improve animal health, reduce costs, and build long-term productive capacity. Calling themselves graziers, they gathered in local networks to share ideas and learn from one another.

By the early 2000s, however, another trend had emerged: new people were not entering the dairy profession at rates that offset retiring producers. So, in 2009, a group of dairy graziers in Wisconsin came up with another innovative idea: apprenticeship. Not just an internship or informal mentoring arrangement, but a serious formal apprenticeship, using the educational system that has prepared skilled people in the trades for more than a century.

Dairy Grazing Apprenticeship (DGA) was developed with support from a National Institute of Food and Agriculture’s (NIFA) Beginning Farmer and Rancher Development Program grant of $742,000. DGA, the first formal apprenticeship for farming in the nation, is now a National Apprenticeship for the occupation of “Dairy Grazier,” registered with the U.S. Department of Labor-Employment and Training Administration.

The two-year program prepares apprentices to own and operate a managed-grazing dairy business by combining 3,712 hours of paid work-based training under an approved Master Dairy Grazier with 288 hours of online coursework and local peer-to-peer learning. Veterans can use their GI Bill benefits for class tuition and housing assistance. DGA also provides financial planning services and alternative models of equity building, farm transfer, and farm startup to help participants reach their farming goals.

Managed-grazing dairy farms are an important part of local food systems and rural economies, generating an estimated $20,000 of economic activity per cow per year in the local community and supporting the suppliers and service providers that other rural farm enterprises need to succeed.

NIFA invests in and advances agricultural research, education and extension and seeks to make transformative discoveries that solve societal challenges.