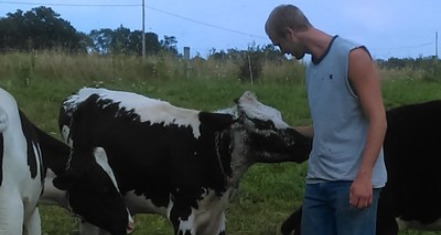 Joseph Moyer grew up on a dairy farm, but he didn’t work on the farm. His older brother, Jacob, eventually became a dairy farmer, but Joseph tried his hand at carpentry, instead. After a relatively brief time working in that trade, however, Joseph began to become curious about the farm and, when he became aware of the Dairy Grazing Apprenticeship (DGA) program, he expressed interest.

“I was surprised,” his father, Master Grazier Brian Moyer remarked. “But I was happy to give it a try with him.”

Brian is a first generation dairy farmer. He grew up in the southeast part of Pennsylvania, and met his wife, Brenda, while managing a herd on another farmer’s operation in Berks County. The Moyers eventually moved north, to Bradford County, decades ago, and never looked back. Today, their farm comprises about sixty acres of rolling hills, almost all of which is pasture and hay ground. Brian is one of the core members of a grazing group in the northern part of the state with which PASA has been working to set up a pasture walk series in 2017. One of the purposes of this series is to expose Joseph, and other beginning graziers–as well as experienced ones–to different grazing operations, and different ways of doing things.

“One of the best things about the program for me has been seeing what other farms are doing, and what’s working and what’s not,” Joseph commented, recently. In the last year, he has had the opportunity to visit four different operations, from Bradford County to Lancaster County, including a stay with another DGA Apprentice at Bobolink Dairy in New Jersey.

For Brian, part of the program has been learning how to teach and, in the process, re-evaluating some of his own practices. “Joseph will be taking an on-line class, or he’ll visit a farm and see something different–or he’ll just be thinking about something–and he’ll ask me why we do something a particular way, and I’ll have to think about why we do it that way. Sometimes, I’m not sure. It’s made me refocus, a bit.”

In October, Joseph and Brian will mark the one-year point of Joseph’s apprenticeship. Joseph is currently on track to finish the DGA program in the minimum two-year time period, including all his on-the-job training hours, elective education hours, and on-line course work. At that point, he will gain Journey Dairy Grazier certification, and will have the ability to apply to the farm management jobs that come through the DGA network, as well as have credit with the Farm Service Agency should he want to take out a loan to start his own farm. For now, though, he’s just focusing on keeping the family farm going strong.

“I didn’t know anything,” he’ll tell you, if you ask where he was a year ago. Today, though, he works in all aspects of the operation, and recently developed a new paddock, on some marginal ground, for grazing the heifer herd he manages. “It’s pretty brushy, but they love it, and since they’ve begun grazing over there, the grass is getting better.” It’s something he’s clearly proud of, and something that demonstrates that, though he may have been a beginner not too long ago, Joseph’s a quick study.