Kelsey Vance is learning about dairy-grazing practices and business from Don Boland, who grazes about 175 cows on a family farm near Gays Mills, WI. 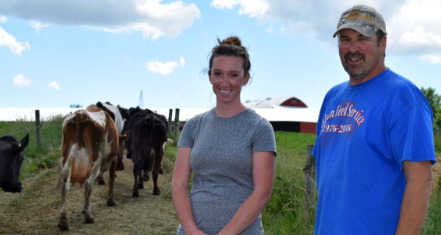 GAYS MILLS, Wis. – Don Boland is a self-taught dairy grazier. Since 1980 when he began grazing dairy cattle he’s attended countless pasture walks and grazing conferences. He has also been a voracious reader of all things grazing.

Today he’s sharing his knowledge with Kelsey Vance, an aspiring dairy farmer enrolled in the Dairy Grazing Apprenticeship program. When the master dairy grazier and apprentice aren’t in the pasture discussing forage species or cow health, they’re sitting at a table reviewing the program’s “Training Guidelines Handbook,” which addresses all aspects of dairy grazing – from production to business practices.

The Dairy Grazing Apprenticeship is an accredited national program registered under the U.S. Department of Labor-Employment and Training Administration. Established in 2010 it has about 100 approved master graziers in nine states, with many more apprentice candidates awaiting placement.

“It’s like a plumber or electrician apprenticeship,” Boland said of the program.

At the Boland farm near Gays Mills, Vance is halfway through her two-year apprenticeship. Apprentices must complete 3,712 hours of employment and mentorship under a master grazier’s direction. They also must complete 288 hours of related instruction. Vance has participated in pasture walks and grazing conferences as well as online courses through the Wisconsin School for Beginning Dairy and Livestock Farmers.

“Knowledge is power,” she said. “When you’re in an apprentice program like this, you learn so much.”

While not raised on a farm, Vance often visited family who raised heifers. She said she enjoyed working with animals and being outdoors.

Vance graduated from the University of Wisconsin-Stevens Point with a degree in health-care administration. But her interests have instead driven her to an agricultural career. She milked sheep and made cheese at Hidden Springs Creamery in Westby, Wisconsin. She also worked in a temporary position for Organic Valley of La Farge, Wisconsin, coordinating events — such as a farmers’ legislative trip to Washington, D.C. While working with Organic Valley she attended World Dairy Expo, where she talked with a dairy producer who told her about the Dairy Grazing Apprenticeship. She later visited the program’s website and applied for an apprenticeship.

At about the same time Boland was searching the website for applicants. He had previously served as a mentor to a young man who is now a herdsman for an organic dairy in northeast Iowa. That had been a good experience so Boland said he decided to try another apprenticeship.

“Farming experience matters but a good work ethic is more important,” Boland said of choosing Vance as an apprentice. “She had good job experience.”

Vance began the apprenticeship at Boland’s farm in March 2016. She rents a neighboring house, and works between 35 and 40 hours per week at the farm in addition to caring for her baby daughter, Madelynn. Vance and her husband, Max Vance, no doubt compare notes about apprenticeships. He’s training to become an electrician in La Crosse, Wisconsin.

In addition to working on the farm, Vance works with Boland on completing the apprenticeship handbook. It was developed to ensure that all aspects of dairy grazing and business are addressed, said Mary C. Anderson, education coordinator for the Dairy Grazing Apprenticeship’s western Wisconsin territory.

“It prompts masters to explain why something is done, which frequently leads to more conversations,” she said.

So rather than Boland just saying that he uses a certain mixture of forages, the handbook urges him to explain why he uses certain species.

“The program helps apprentices to learn to think on their feet – such as how many days’ rest cows should have before returning to pasture, the impact of time of year, weather conditions and so on,” Boland said.

Anderson visits the pair monthly to ensure they’re progressing with the lessons, hands-on work and additional instruction. She also works with several other master graziers, including three who are currently seeking apprentices.

Vance has written a nutrition plan and a herd-health plan as part of her apprenticeship’s requirements. She also must write a business plan. Hoping to have her own farm one day, all of these exercises should prove helpful. Also helpful is understanding the blood, sweat and tears involved in dairy farming.

Boland and Vance have discussed the downsides of dairying, such as the current oversupply of milk and low prices, and the loss of contracts by some producers. Vance said she understands the challenges.

“I will press on, and pray for better times,” she said.

She added that she realizes the physical and mental challenges of dairy farming.

“What I appreciate the most is it’s the first job I’ve ever had that makes me feel good about myself and my work every single day,” she said. “It’s honest, hard work – work that I’m proud of doing.”