Many Paths to Starting a Dairy 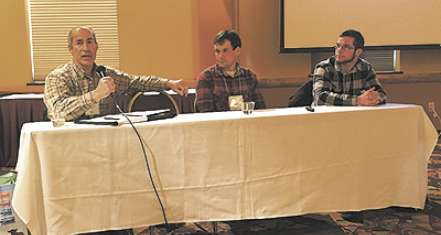 WISCONSIN DELLS, Wis. – Getting a foothold in today’s dairy economy can seem overwhelming to a young farmer looking to start his or her own dairy farm.

New producers and an agricultural lender shared their opinions on how a producer can begin their career during the Grassworks Grazing Conference Feb. 1 in Wisconsin Dells, Wis.

Young journey graziers Ryan Heinen of Pewaukee, Wis., and John Richmond of Colfax, Wis., were joined on the discussion panel by Ron Bula, a financial advisor with Compeer Financial in Baraboo, Wis., to share their thoughts and experiences on entering the dairy industry in today’s volatile markets.

Heinen graduated from the Dairy Grazing Apprenticeship in the spring of 2018. Following his graduation, he was unable to locate a farm he could afford in the area where his family wanted to locate, but with the help of the DGA he found a position as a land and livestock manager on a 420-acre farm near Waukesha, Wis.

“It’s a beginning farm, and it was supposed to be developed into housing, but the current owner purchased it with the intention of preserving it as a farm,” Heinen said. “My job is to get the livestock enterprises started, as well as some specialty crops. There is also a 10-acre vegetable operation on the farm.”

According to Heinen, the farm used to be a dairy farm and the owner’s plan included resurrecting a dairy herd on the property, but the dairy market did not allow for that to be part of the immediate plans.

Heinen put 100 acres of pasture to use by finding a local beef farmer to work with, custom-raising beef on the pasture land, allowing him to begin to develop the pastures. He also has been working at managing the wooded areas of the farm.

Heinen earned five dairy cows during his apprenticeship. Those, along with a few purchased calves, encompass the beginning dairy herd. The cows raise the calves on pasture and are milked once a week by hand to supply milk for Heinen’s family.

“There is a really nice, old dairy farm on the barn, built in 1958,” he said. “But there hasn’t been dairy cows in the barn for over 20 years. I got to thinking about how often that happens; that once a dairy farm sells its cows the cows come back to the farm.”

Future plans include starting an on-farm creamery with the possibility of making and selling grass-fed cheeses or butter. Heinen said the farm’s close proximity to large population areas is conducive to direct-marketing.

Despite an interest in the dairy industry, Richmond had no direct access to a farm. Richmond found out about the DGA while he was attending the University of Wisconsin-River Falls. He entered the apprenticeship following graduation, working with Charles Flodquist on his farm, graduating from the apprenticeship program two years ago.

“Charles decided he would be comfortable being my loan officer,” Richmond said. “That’s a big part of getting into the dairy industry. You either have to have someone who’s willing to work with you financially, or you have to start small.”

Richmond grazes 150 milk cows and calves his herd bi-seasonally. Although the farm is around 500 acres, only 71 acres is mechanically harvested.

“The way I look at it, with this dairy economy, the best way to stay in it is starting up your tractor less,” Richmond said. “That’s a very big cost. Fence and electricity are pretty cheap compared. Cows handle outside just fine. You might have to breed for it. You just need to breed for what animals can thrive in your operation.”

“Why would you spend the time and money harvesting the feed and taking it to the cows, when the cows will do it for you?” Richmond said.

Speaking from a lender’s point of view, Bula said he has seen a lot of changes in the dairy industry throughout his career.

Bula cited tough conditions facing beginning dairy farmers including difficult cash-flows, depressed prices and the emergence of larger farms. “Your opportunity is to be more nimble than the bulldozers coming at you and figure out ways as a smaller producer that you can make things work,” Bula said.

He cited possible opportunities such as micro-dairies, and making and marketing a value-added product. Bula encourages diversity, especially for smaller farms. According to Bula, the depressed dairy economy makes it cheaper to enter the business than it has been before.

“Cattle are selling for a fraction of what they have, equipment and facilities are all pennies on the dollar,” Bula said. “The biggest thing is making sure you have a market.” His advice for new dairy farmers is to approach a potential lender with a plan. Bula said the first thing those looking at developing a dairy business plan need to look at is making sure the farm is viable and sustainable, providing a decent income for the producer.

“You want to be able to bring a business plan to your lender with your goals and objectives laid out,” Bula said. He encourages new producers to get certain assets, such as cows and equipment, bought and paid for before purchasing real estate.