"Love and dedication to agricultural life has many rewards"

Molly Brook Farm, owned by DGA Mentors Rhonda and Myles Goodrich, was recognized as the 2022 Vermont Dairy Farm of the Year. 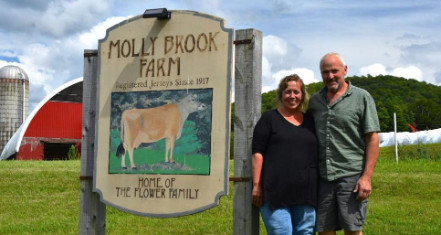 At a time when the dairy industry in Vermont is facing problems, thanks to the loss of small farms, volatile milk prices, and environmental issues, Molly Brook Farm in Cabot, owned and operated by Myles and Rhonda Goodrich, offers an example of the future.

The farm, which has been in continuous operation for close to two centuries, was honored near the end of 2022 as the Vermont Dairy Farm of the Year. The award is presented annually by the University of Vermont Extension Service and the Vermont Dairy Industry Association, in cooperation with the New England Green Pastures Program.

Myles and Rhonda Goodrich represent the seventh generation to work the 565-acre hillside farm. Their dedication to the production of high-quality milk was apparent to the judges who selected them for the 2022 award. Other Molly Brook Farm practices found exemplary were its herd management, pasture quality, milk production records, super clean facilities, and land stewardship.

Myles and Rhonda took over the full operation of Molly Brook Farm in 2013 from Myles’ parents, Walter and Sally Goodrich. Winning Vermont’s top farm award is not a new honor for the Goodrich family. Molly Brook Farm was awarded Vermont’s highest dairy farm honor in 1987 when it was owned by Myles’ parents. As well, Myles’ daughter, Jennifer, and her husband Morgan earned the award in 2019 for Wonder Why Farm in Cabot.

What is the secret to Molly Brook Farm’s past and continuing success? First and foremost, the Goodrich family has a deep love and dedication for their work. “Honestly, having this farm, sometimes I ask myself how we even deserve this, so we try to do the very best that we can with the cows and the land,” said Rhonda Goodrich.

Another trait that has served Molly Brook Farm well is that “Every generation of the Goodrich family on the farm has embraced change and innovation,” said Rhonda.

She added, “Cows are really amazing. They are so resilient and smart. I am impressed every day. They work very hard for us, so we work just as hard for them.”

Love and dedication to agricultural life have many rewards, but running a family farm can also be a struggle, especially in the current system dairy farmers are facing in Vermont. On the one hand, dairy production is still the largest part of the state’s farm economy, representing roughly 70 percent of Vermont’s agricultural economic value. On the other hand, market factors are favoring agricultural consolidation over small farm operations - and environmental issues associated with agriculture are being targeted for potentially expensive changes.

Between 2012 and 2021, Vermont’s USDA milk production stayed stable, but the number of dairy farms in the state dropped from 972 to 583. At the same time, herd sizes have grown, from an average of 138 cows per farm to 205 cows per farm. Once thought to be the new life of the Vermont dairy industry, certified organic farming is now experiencing a troubling trend too. In 2012, the Vermont Department of Agriculture counted 205 organic dairy farms in the state. In 2021, only 162 farms still carried that designation.

Molly Brook Farm is experiencing success because in some ways the farm is bucking trends that are current in Vermont agriculture. For example, Myles and Rhonda have centered their focus on the organic dairy industry, which has led them to decrease their herd size from 120 to 70 milking cows. At the same time, they have embraced the future by making changes to meet water quality standards required by Vermont law - and they have taken advantage of a program through the Vermont Land Trust to conserve their land.

In some ways, Molly Brook Farm’s story can offer a roadmap for other farmers in the dairy industry, although Rhonda Goodrich made it clear in a phone conversation, “What we do is just us. We would never want to tell other farmers how they should farm.”

Myles Goodrich, who grew up on his family’s farm, met his future wife, Rhonda when she was working for National Life Insurance Agency. She did not know about dairy farming, but it did not take long until she grew to love it. Today, among her many farm responsibilities, Rhonda takes personal care of the farm’s calves, and her attention has resulted in a very low mortality rate.

When Myles and Rhonda took over full ownership of the dairy farm about a decade ago, Molly Brook Farm was world-renowned for its Jersey breeding program, which was started in the 1980s by Walter and Sally Goodrich. Originating with a cow named Molly Brook Fascinator Flower, Jersey cow genes from Cabot, can be found in cows on every continent in the world except for Antarctica.

“Myles’ parents were really the first in Vermont to harvest embryos,” said Rhonda, and not a year goes by but somebody from Brazil, or New Zealand, or some other far-flung place stops by to see the farm that was the birthplace of such a successful line of Jersey cattle genetics.

It was a plan Myles had long been thinking of as he worked with his parents before taking over full ownership of the farm in 2013. Two years later, Myles and Rhonda began to transition the farm to become an organic dairy. It took a year to transition the dairy herd to full organic feed, and three years to transition the land to meet the requirements for organic farm certification.

With financial and technical assistance from the United States Department of Agriculture’s Natural Resources Conservation Service, Myles and Rhonda first converted 53 acres of cornland to perennial grass and clover for hay and pasture. They also put in a new watering system and installed fencing for rotational grazing.

“We wanted to return to farming in a simpler way, like Myles’ grandfather and great-grandfather did,” said Rhonda. “We didn’t like herbicides and pesticides in the ground.”

The dairy cows on Molly Brook Farm now spend their summers paddocked in various places throughout the farm’s acreage, getting natural food and at the same time naturally fertilizing the land.

It sounds simple – but it took courage to move from a traditional dairy operation to the organic realm. In the beginning, the cost for the farm to produce milk was more than what they were being paid. It was stressful and Myles and Rhonda had to operate on a very slim margin.

Always on the lookout to save money, during the transition the Goodrichs realized they could save $80,000 if they transitioned the cows six months before the completion of the land transition. “So, we creatively grazed the cows until the land was fully organic,” said Rhonda.

With a background in business, Rhonda has been able to help her husband find other ways to cut costs too. She has even learned to vaccinate cattle on her own, saving a $3,000 fee for veterinarian visits, and she has also learned how to implant frozen embryos to inseminate cattle for the farm’s breeding program.

Unlike some Vermont organic dairy farmers who were stung by Horizon Organic’s announcement in the summer of 2021 that they would be pulling out of the region - causing at least eight of the organic dairies that had sold milk to Horizon to leave the business - Molly Brook Farm affiliates with yogurt-maker Stonyfield Organic of Londonderry, NH, a company that has a mission to work with farmers in a 200-mile radius of its headquarters.

“They pay a good price and I can’t say enough good things about them,” said Rhonda. She expressed praise for many Stonyfield programs, like one that gives out $4,000 grants to help farmers with innovation projects. On Molly Brook Farm, Stonyfield helped Myles and Rhonda establish bees on the farm for pollination. The Goodrich family also works with Stonyfield’s OpenTEAM pilot project to monitor carbon sequestration on the farm.

Myles and Rhonda someday hope to pass on their farm, if not to family, then to somebody new who will continue the stewardship of the land and the meticulous care for the dairy herd that has been such a hallmark of the Goodrich family for so many generations. What Myles and Rhonda most care about is that the farm will continue to operate, as it has for close to two centuries.

To incentivize young people to consider careers in agriculture, Myles and Rhonda work with several programs to educate future farmers. Through the Dairy Grazing Apprenticeship Program they provide training on “every aspect of farming,” said Rhonda. She also has what she calls her “kid crew,” young people who get a hearty breakfast and help out at the farm on weekends – for pay.

“We want to get young people inspired,” said Rhonda, who has also worked with Cabot School and a student from Union #32 High School.

What else is needed to build a successful organic dairy operation? It helps to have somebody on the farm pay attention to the many grants and low-interest loan programs that have been designed at the state and federal levels, and by the dairy industry, to help agricultural operations. Agencies and funding programs – like USDA, UVM Extension Service, Vermont Housing and Conservation Board, and Vermont Working Lands Program - have been very helpful to us, said Rhonda.