DGA is pleased to be a new member of the National Sustainable Agriculture Coalition (NSAC), which does such valuable work in agriculture policy. This NSAC blog post on DGA features interviews with Apprentices, Reed Fitton and Kyle Serwe, and Master Dairy Grazier, Donald Boland. 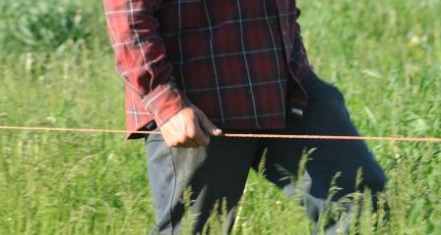 The aging of America’s farmer population has become of increasing concern in the last several decades as older farmers retire without a new generation ready to take their place. Given the challenges inherent in farm life– hard work, high risk, and unreliable earnings– younger generations have been leaving rural areas for more secure career opportunities, and fewer new farmers are entering the profession. The Dairy Grazing Apprenticeship (DGA) program, out of Medford, Wisconsin is trying to turn the tide and by ushering in a new wave of young dairy farmers.

The new program is an innovation on a tried and true method — master to apprentice teaching. In this way, DGA is hoping to revive traditional dairying and train a new crop of young would-be dairy farmers to use sustainable grazing and other conservation methods.

The DGA program is supported by the Beginning Farmer and Rancher Development Program (BFRDP), a USDA grant program, which helps raise the next generation of farmers by ensuring they get the skills and financial supports they need to thrive.

Five years after receiving their BFRDP grant in 2010, DGA has grown from local to national, and is now federally registered within the U.S. Department of Labor’s Apprenticeship program. Their program, which first expanded out of Wisconsin to interested farmers and graziers in Minnesota and Missouri, is now also working with farmers and farmer organizations across Pennsylvania, Maine, and New York.

Two DGA apprentices, Reed Fitton and Kyle Serwe, and master grazier Don Boland, recently spoke with NSAC to offer a glimpse into what the program offers to young farmers from different backgrounds.

The Modern Apprentice: Finding a Foothold

Reed Fitton, 29, is an Iowa native, but he didn’t grow up on a farm. After earning his Bachelor’s degree in archaeology in Iowa, Fitton changed courses to follow pursue a budding interest in agriculture.

“I took a lot of beginning farm classes since I didn’t grow up on a farm,” says Fitton. “I worked on a vegetable farm, and then started to get into dairy in Wisconsin.”

Fitton discovered DGA while attending a Grassworks grazing conference in Wisconsin. The formal training and accreditation offered by DGA appealed to Fitton because it allowed him to hone his new skills by working on a larger, more established dairy farm, and also because of its universal recognition across the country.

“With accreditation, at least I could take it and go to a larger farm or move somewhere else in the country. With a nationally recognized standard, anyone can look at it and say ‘oh he knows what he’s doing’,” said Fitton.

For apprentices, professional certification of their dairy farming skills is particularly appealing because it greatly decreases their barriers to entry into the dairy industry.

At the time he discovered DGA, Fitton was renting a 60-acre farm while also helping grazier Don Boland with his milking operation. Boland, a fifth generation farmer, agreed to take on the Master Grazier role so that Fitton could complete the apprenticeship on his farm.

“The biggest advantage to us is we can have someone here who wants to be here,” says Boland. “It’s hard to find motivated help.”

In order to complete the educational component of the program, apprentices must complete a workbook that addresses the entirety of a grazing operation. They must also take classes at a technical college, with subjects ranging from soil quality to feed rations. In contrast to what the program teaches, much of Fitton’s classwork comes from a conventional agriculture perspective.

“They were talking about all of these diseases that we’ve never even heard of because our cows stay outside,” Fitton recounts. “But we still need to know about them, just in case.”

In return for his work, Fitton receives dairy heifer calves as part of his wages, enabling him to begin his own operation soon after graduation. He is ten hours and one class away from finishing the apprenticeship; afterwards, he hopes to find a partner with whom to start an organic dairy of his own.

The apprenticeship is equally as beneficial to young farmers with extensive prior farm experience as it is to those just starting out. Kyle Serwe, 27, has been working on his grandfather and great uncle’s 250-acre farm, the Bob and Bill Guell Farm in Eden, Wisconsin, since he was in kindergarten.

Serwe sought out the DGA program because he wanted to expand his existing knowledge and skill set. Through the program, Serwe was able to help his family implement a more intensive grazing management strategy using twice a day rotational grazing practices, and beginning composting for fertilization. Both young and experienced farmers recognize how valuable the apprenticeship is for training the next generation of farmers.

“It actually gives a younger person the opportunity to try farming and get paid while they’re still in school,” said Serwe.

In return for his work, Serwe received a salary and one heifer calf each month. He graduated from the apprenticeship in January 2014 and now has a substantial herd of 24 heifer calves.

With both Bob and Bill in their mid-60’s, finding someone to take over their operation of 180 milking cows, is a top priority. With the DGA training under his belt, Serwe is now planning to lease his grandfather and great-uncle’s farm for two years as a test run. During this period he’ll try to build equity and see if ownership is the right path for him.

Building Continuity with Masters and Apprentices

The DGA program hinges on building relationships between masters and apprentices: it offers beginning farmers—the apprentices—the opportunity to learn from knowledgeable, successful graziers—the masters. The program screens potential masters, such as Boland, who must be eligible farmers with at least five years of experience in organic or grazing methods, and enrolls them in a training program to become effective communicators.

Upon completion, they are free to select an apprentice. Apprentices, such as Serwe and Fitton, also face rigorous training, completing a required 4,000 hours over two years. The apprentices complete 3,712 hours through paid, on-farm work, with the remaining 288 hours reserved for complementary classroom instruction, pasture walks, and workshops.

Ultimately, DGA’s goal is to create a chain of master and apprentice relationships that spans generations, with former apprentices taking on farming operations and new apprentices of their own when they are able. DGA currently boasts 60 masters and 22 apprentices, with an additional 29 apprentices on their wait list. So far, eight of DGA’s apprentices have successfully completed the two-year program. Soon, they too may become master graziers and inspire more young farmers to pursue a career in dairying.