DGA Master Brian Moyer and his son Joseph, who is on track to become the first Journey Dairy Grazier in Pennsylvania, use conservation practices to improve soil health and biodiversity. 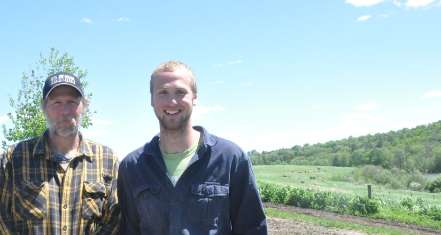 Brian Moyer, a Master Dairy Grazier through the Pennsylvania Association of Sustainable Agriculture’s (PASA) Dairy Grazing Apprenticeship program, farms in Towanda, PA. When he moved to the land almost 20 years ago, it had been in hay and row crops, with poor soil health.

Moyer adapted no-till row crop methods, and saw vast improvements. But after receiving organic certification three years ago, the enhanced focus on grazing the cows led to some changes in how the land was utilized. Moyer has been improving his pastures via managed rotational grazing on perennial forages, and no till seeding some annual forages to provide abundant grazing opportunities while improving heavy use areas.

Moyer’s son Joseph, a Dairy Grazing Apprentice, is set to become the first certified Journeyman Dairy Grazier in Pennsylvania, after completing his two-year apprenticeship this spring. Joseph, along with his wife Catherine, have been focusing on improving weedy, edge habitat pastures through heifer grazing strategies, and creating silvopasture environments for the heifers.

The milking herd of crossbred Holsteins, plus a mix of Ayrshires, Linebacks and other breeds, is milked twice per day, and rotated to fresh pasture after each milking. They remain on pasture all day during the grazing season.

The Moyers are focused on providing more shade on their pastures, and are actively exploring various options. A riparian buffer area along the pond is a possibility for managed grazing in a silvopasture environment. Moyer is also looking to selectively add trees to some pastures, creating a savannah-like environment, and does include access to wood edges in perimeter pastures, to provide shade and forage to the herd. 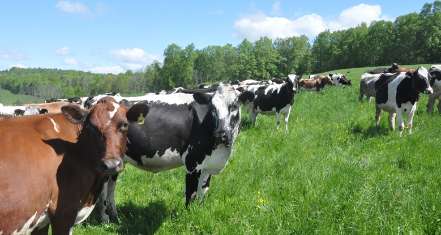 The farm is situated on steep, sloping land with the farm pond at the bottom of the hill. The milking herd’s heavy use exercise lot area is adjacent to the barn, located slightly uphill from the pond. This area is utilized in the winter, or whenever the ground is too wet – which it has been frequently over the past year – to provide access to the uphill pastures without unduly damaging them.

“It’s not the most stable area,” Brian Moyer said of the heavy use paddock, and the area does get abused. It will be broadcast seeded in annual rye, which can grow right on top of the hay remaining in the paddock. The area will then be grazed later in the season when the forage matures.

Another area which sees heavy use is the heifer pen, which has not been well-managed. Round bales were grazed here over the winter, and the area is used to acclimate the heifers to the fencing. The area is reseeded with a quick-growing perennial pasture mix after training, with the goal of re-establishing forages here.

Bale feeding in the sacrifice lots does help to sequester carbon into the soil. They feed baleage outside, and dry hay in the barn. Manure from the heavy use lots and the barn is moved partially uphill, to a relatively flat area, where it is composted in windrows. The Moyers are exploring fencing in a few pigs to stir up the windrows and enhance the composting activity. 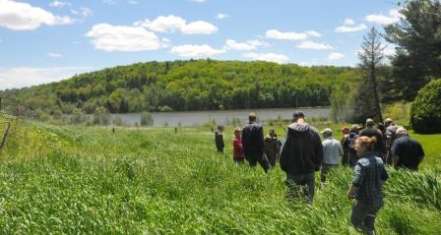 The sloping hilltop pastures are utilized until the lane is too muddy to traverse in the winter. Cows are bale grazed off-season, and the bales are routinely moved around the pasture, to minimize damage to any given area. These pastures will be no-till seeded with corn, buckwheat, sunn hemp and sunflowers as soon as the spring weather allows. By early July, the pasture will be ready for grazing.

“Corn gives me a lot more stages of maturity” than other forages, Moyer said, so he can better manage his pasture rotations, as he can graze the corn at several different stages of growth depending on his needs.

He doesn’t want to put corn on the pastures two seasons in a row, however, so ground that was planted to corn last year will instead be planted to millet. He anticipates being able to graze the millet several times.

In the past, Moyer was a “die hard annual” proponent. Now, however, he is much more aware of soil health. “Every year it seemed like you were starting over, soil-wise” with annuals, Moyer said. “I want to do what is best for my soil.”

That means relying primarily on perennial forages in the pastures, while using annuals to revitalize areas as needed, and provide supplemental forages. It also means foregoing the use of synthetic fertilizers. Fertility is added to the soils through the composted manure, through the managed use of bale grazing, and by the herd as they graze. The goal is to keep building soil health, while having enough forages for grazing.

Moyer has dedicated hay acreage, so he does not bale forages from the pastures. He does find himself with overgrown head-high forages at times, but these older forages are flattened by the cows as they graze them, giving back to the soil and enhancing pasture productivity, he said. While grazing past-their-prime forages does decrease milk production, the soil benefits by having the actions of the cows on the pasture, rather than baling it and leaving the paddock dry and non-productive for the rest of the season. He is content to take a small hit on milk, and gain a big benefit to the soil.

One reason forages get too mature is wet soils. Moyer won’t put the cows on the pastures if the soil is prone to damage, as the primary goal here is building soil. He does tighten the paddock size as forages mature, so the animals will clean up the paddocks better than if they are allowed larger areas. 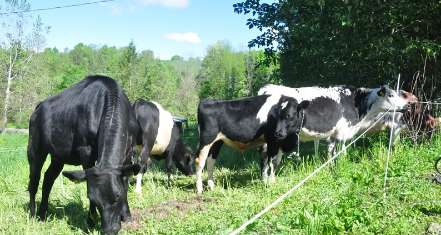 There are multiple heifer groups, based on age, which are run through less productive fields. These fields are subdivided as the groups graze, as they’ve yet to develop permanent laneways to access these areas efficiently. These pastures tend to be wet, and often the forages are very mature before the heifers can access them.

He’s had success in grazing very weedy fields, filled with goldenrod and tessel, and is seeing grass growing in these areas now. He’s also selectively mowed areas to keep weed pressures down, and keeps paddocks smaller to decrease selective grazing and clean up the weeds. The heifers also have access to a young sumac silvopasture. They were grazed in this area for the first time last year, and the ground and forages have improved.

The several dozen people in attendance at the pasture walk also heard from Austin Unruh, of Crow and Berry Land Management, who gave a presentation on establishing silvopastures by selecting the right trees to meet the needs of the animals while enriching the land and providing opportunities for diversified farm enterprises.

The Moyers continue to enhance the land through managed grazing, benefitting both herd and soil health. Establishing perennial pastures, adding natural shade in the pastures, and improving heavy use areas are ongoing goals as the farm continues to evolve.