Dairy Grazing Apprenticeship has helped dairy farmer and mother get through challenging times on the farm by providing access to motivated farm labor. 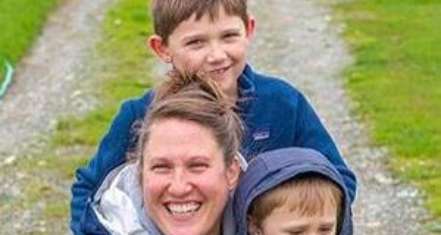 Abbie Corse, an owner and operator of the Corse Farm Dairy, has been learning to juggle mothering and farming for ten years, and it has not always been easy. Mother of Eli, 10, and Niko, 7, and stepmama to Grey, 14, Abbie is finally becoming clear headed about what pressure points exist at the intersection of farming and parenting. “I’m an unusual dairy farmer,” shared Abbie in a recent interview, “because I don’t farm with my partner. This has literally defined how I am able to farm; needing to be the primary caregiver and farmer all at once.”

Before becoming a mother, Abbie had no idea what a challenge it was going to be. “My expectation of myself, brought on by a societal and cultural expectation,” she shared, “is that I would be able to become a mother and still farm, just like I had before.” In fact, after having her first son, struggling through a difficult labor and trouble breastfeeding, difficulties finding childcare, and working hard to keep the family farm going, Abbie felt more alone than she ever had in her life. “I don’t want any other farm mother to experience the pain, heartbreak and despair that I did,” she said.

Abbie described the unique challenges of farming and caregiving, emphasizing the reality that carrying out the responsibilities of your job and childcare simultaneously is not expected in any other profession. Somehow, however, in the farming world, this is expected and accepted. “If that is what you want to do, I bow to you,” Abbie shared, “but it shouldn’t be the standing expectation.”

After suffering a nervous breakdown in August 2008 while living and working away from the family farm, Abbie and her husband moved back because that was where they felt she could be most whole and supported. With access to her family and the medical support she needed to navigate her mental illness, she apprenticed with her father to take over the family dairy business. She felt privileged to have housing and basic needs met, but money was tight, and when she had her first child in 2010, childcare was a financial burden.

Although she was able to figure out a childcare solution within their family budget, this was a seriously challenging time for Abbie and her family. Imagine the dead of July, in 90 degree weather, urgently needing to get hay dry and then having to stop in the middle to pump and drive 20 minutes to bring milk to her child in childcare. This was not sustainable.

When Abbie started thinking about having another child, she couldn’t fathom how it would be possible. “I agonized over it so long quietly,” Abbie said. “I cannot have another child and do this work that I love because I’m almost losing my mind with one.” She ultimately confided in her father who assured her that they would all find a way to make it work if she wanted to prioritize growing her family. Abbie worked with her family to ensure that her compensation on the farm would include the cost of childcare, and when her second child was only 8 weeks old, with the support of a friend, they found a spot available in a childcare in the next town over where he could be safe and nurtured while Abbie continued her work on the farm.

They managed to make it through those early years until the kids were old enough to go to school. And then the COVID-19 pandemic came and everything was upended all over again.

While Abbie and I spoke, her two kiddos were working on remote school and Abbie was juggling a variety of meetings while feeding them lunch and making sure they were supported. She said they have been able to make it through this time because of the support of their labor force on the farm, including a reliance on the Dairy Grazing Apprenticeship program which has been critical for their farm’s survival. While she admits that being both a farmer and a mother are her greatest challenges, they are, ironically, also her greatest joys. “It was only after becoming a mother that I settled into how I could be a farmer as well. The work informs the work. I don’t know that I could be the dairy farmer that I am if I hadn’t become a mother.”

When I asked Abbie about the impact of the pandemic on her farm and family, she was brutally honest. “My experience,” Abbie reflected, “is that it was the same as everything else related to farming. There is an expectation from farmers themselves, farming culture more broadly and from the public at large that farmers and farmworkers will be good soldiers. They will just figure it out.” This experience has not been any different. “In far rural communities or marginalized communities, you just know that nobody is coming to help you.”

Abbie readily acknowledges all of the supports and privileges she has that have helped her to make it through, putting one foot in front of the other. But she is adamant that it should not have to be such a challenge. “I don’t have any magical answers for how a new mother right now who is also farming is supposed to make it. We have to come together and insist that what we need to thrive as whole people (farming & caregiving) in rural communities is worth pursuing, is something that is valuable, is something in which this state needs to pay attention to and invest in. Otherwise the farms and young people are going to continue to disappear.”

Abbie is quite clear that our young people are in part leaving the state, “because there is not a robust enough infrastructure here to raise up your family rurally.” Farmers need what every other person needs to live a life of dignity: schools, childcare, healthcare, and community. We must continue to advocate for these things on the policy level, and in the meantime we’re going to have to build these systems of support together.

NOFA-VT wants to hear from you! We are seeking to bring attention to the critical work of caregiving and the unique challenges posed for farmers who are also caregivers. We hope this work will build farmer-to-farmer relationships and support networks, and also provide a basis for future advocacy and coalition work to bring these unique challenges to light. Learn more at nofavt.org/farming-and-caregiving .