A recent DGA webinar explored Pasture Water Systems, including options, materials, construction and locations, for helping to keep cows safe in the heat. 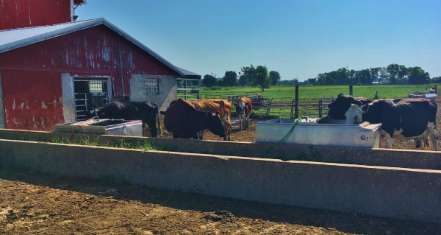 “Marathon County is somewhat of a hotbed for rotational-grazing farms in Wisconsin, and Paul and Bill have been instrumental in making that happen,” said Altfrid Krusenbaum, education coordinator with Dairy Grazing Apprenticeship.

Paul Daigle is the land and water program director, and Bill Kolodziej is a grazing specialist, both for the Marathon County Land Conservation, Planning, and Zoning Commission.

Kolodziej said he’d received a flurry of calls from producers after a week of temperatures in the upper-80s to 90 degrees. Problems include cattle ganging up around water tanks, making it impossible for less-aggressive cattle to access the tanks.

“For optimal land-use efficiency, water should be provided within 600 feet from a grazed area,” he said. “That’s an absolute maximum. If you’re just starting a grazing set up be flexible with your initial water-system plan. Many farmers change their plans before settling on a water system set-up.”

In addition to a water system in grazing paddocks he’s a big fan of an additional watering area near the milking facility for dairy farmers.

“It’s usually easy to do and it can take a significant amount of pressure off the paddock waterers,” he said.

Methods for routing water to paddocks vary, from hauled water and above-ground water lines to buried-line systems – along with solar- and wind-powered systems. A modified tree planter can be used to bury water lines 6 to 8 inches underground. That eliminates cattle and machinery damage to the lines; they can take the lines apart and cause big headaches to unwary producers. But he warned the lines need to be drained effectively prior to freezing in late fall.

“We usually go with above-ground water lines for most of our start-up farmers,” Kolodziej said. “We try to locate the line where it will be shaded to help keep the water from getting excessively hot.”

He recommends 160-pound-per-square-inch plastic line with a minimum 1-inch diameter. Whether a farmer uses a buried-line system or above-ground, quick couplers that allow producers to tap into the line are a must.

“Don’t stretch the line tight when you lay it out,” he said. “Leave room for expansion and contraction to eliminate opening at a line coupler.”

“You need that reserve capacity when the whole herd heads for the tank simultaneously,” he said.

Full-flow float valves are an absolute must to avoid a restriction in water flow to the tank.

“Some of the larger herds have gone to permanent tanks in pastures to eliminate capacity issues,” Kolodziej said. “I personally think the home run is to have a watering area close to the buildings, that allows the herd to bulk up and take pressure off the pasture waterers. This allows the less-aggressive animals to get their fill at least twice a day at milking time.”

A looped-line system was discussed rather than having dead ends in a water line when water flow was limited by an excessively long system.

“You’re better off increasing line diameter to increase capacity rather than creating a loop,” Daigle said. “We designed a system for a large grazing dairy to have 20 gallons per minute at the end of the water line. The furthest paddock was a mile away, so we went with a 4-inch line that eventually reduced to 2 inches.”

Longtime Wisconsin grazier Bert Paris of Belleville, Wisconsin, said he abandoned his pasture-watering system in favor of a watering station and shade structure near his milking parlor. 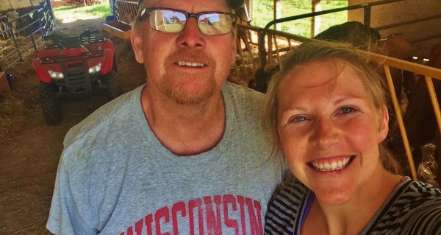 He and his daughter Meagan Fuller milk 80 cows on 130 acres of pasture. When they were building their milking parlor in 1997 a water line that served the pastures was removed. He created a watering area near the parlor and never looked back.

“It eliminated a lot of problems, including not being able to take a shower because the cows knocked over the tank in the evening paddock,” he said.