Today's grazing isn't like your grandfather's grazing. Walk along with innovative graziers, Bonnie and Vance Haugen and their son Olaf on their seasonal grazing based dairy. 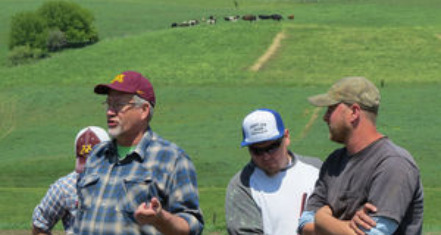 Olaf Haugen said all his land is cropland, but rather than harvest with machines, he harvests the crop with animals.

The Haugen family milks about 200 cows. The cows are a Holstein and Jersey base with Norwegian Reds and Normande also in the crossbred herd. They rely on New Zealand genetics, Bonnie Haugen said, because New Zealand farmers have bred their cows to make milk on grass, to settle, have a mild temperament and have good feet.

Cows are milked twice daily - at 7 a.m. and 6:30 p.m. - and cows are let into a new pasture after each milking. They are seasonal milkers, starting calving in late March, and they are about done. Their goal is to have cows nearing the peak of their milk production cycle when the pastures are the most lush.

In addition to pasture blends, the cows are fed four pounds of a grain mix in the parlor during milking, Olaf said. Cows drink when they come up for milking as only some of the pastures have access to water. In order for this to work, the water must be ready when the animals arrive and there must be plenty of headspace. They have 3,000 gallons of water in the barnyard.

When planning a grazing system, Olaf encourages farmers to build moving lanes on the high ground, as the lanes are basically a road for moving cattle.

“Lane placement is a big thing,” he said.

They have two main lanes that run north and south on the farm, with secondary lanes running east and west between their 150-yard wide paddocks. The paddocks follow the contour.

Bonnie and her husband, Vance, who also works for University of Wisconsin Extension, talked about the importance of having a plan for their farm. While Bonnie stayed home to run the dairy, Vance worked off-the-farm.

She said while Vance would talk about these long-term goals, she was focused on the day-to-day. It caused conflict, but they learned both approaches were essential to the success of their farm.

Bonnie, who is the Minnesota education coordinator for the Dairy Grazing Apprenticeship, said the program is registered at the federal level. The program is an official apprenticeship program, similar to programs for plumbers or electricians.

The objective of the two-year program is to train younger people to start their own grazing dairy or to take over a grazing dairy operation, Bonnie said. Apprentices need not have a farming background.

It is recognized by the Farm Service Agency and completing the program gives apprentices a leg up when going to the bank for a loan, Jim said.

Apprentices train under the guidance of a master grazier, someone who has at least five years of experience.

“We just want more young farmers on the land. … We want the older generation to have an option to transfer out,” Bonnie said.