DGA Education Coordinator and Director of River Country RC &D, Mary C. Anderson, has been honor with the Gaylord Nelson Green Earth Award for her dedication to managed grazing and family scale agriculture. 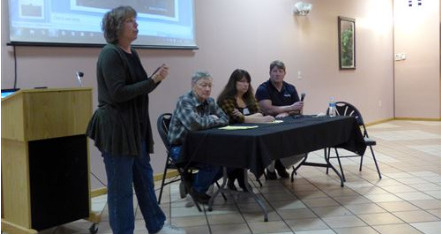 As the pasture walk is about to begin, the crowd starts to gather. There are experienced graziers from several counties away, new graziers from up the road, future graziers hoping to pick up some tips and conventional farmers either curious about what these farmers are doing with grass where corn could be or just wanting to chat with some neighbors for an evening. And then there’s Mary C. Anderson, leading them all.

Anderson, who has been with the River Country Resource Conservation and Development Council for 19 years and is president of the group’s board of directors, has led dozens of pasture walks in the group’s coverage area, leading conversations on the benefits of grazing livestock and keeping grass coverage on the region’s rolling topography.

“There’s nothing harder to see than chocolate-colored water coming down 300 feet of slope that you know is going to leave a gully when the water goes away,” she said. “And that soil is not supposed to be in the creek and down into the mill-pond lakes and down into the Mississippi and ultimately the Gulf. That soil is supposed to be on our hills helping us grow food.”

“She not only teaches farmers sustainable grazing from her position at River Country Resource Conservation and Development Council, but she coordinates the regional grazing network, is the regional education coordinator for the Dairy Grazing Apprenticeship Program, hosts pasture walks and operates her own grass-fed organic beef cow-calf operation in Whitehall,” the news release said.

Anderson said she took a one-year limited-term employment position with River Country to help determine how many grazing specialists were needed in their coverage area. Following those efforts and the creation of the state’s grazing standards, the group was able to secure funding for a grazing specialist and network activities and promotion.

“At the time, there was no state grazing specialist; grazing was pretty new on the ticket,” Anderson said.

Anderson said securing funding for the grazing group’s efforts has always been a challenge, with sources ranging from federal and state governments to memberships and partnerships.

“We’ve been through the high times of being funded through some federal and state funding,” said Kevin Mahalko, vice president of the boards of directors for both River Country RC&D and GrassWorks. “Mary was instrumental to that. She went right through the congressional offices, saying, ‘We need support for family agriculture.’ And she got it.”

River Country’s grazing network includes about 40 members and more than 100 participants in their events, Anderson said.

Anderson and her husband, Bruce, run a certified organic farm near Whitehall. They own 150 acres and rent another 60, and the bulk of the land is intensively grazed. Anderson said they typically run about 70 head of rotationally grazed cattle.

“There’s nothing more pleasurable than having coffee in the morning and watching a snapping turtle come out of the creek, walk through a group of steers and their intensively grazed pasture and wander into the wetland on the other side of the driveway,” Anderson said in her acceptance video. “We can have agriculture and natural spaces together.”

Anderson said the bulk of the farm’s grass-fed and grass-finished beef is direct marketed as a “natural product” because they lack an easy-to-get-to organic processor.

“To get that organic seal, we would have to drive an hour and a half, two hours with our animals, and that would just put too much stress on them,” Anderson said. “We chose to use a local processor to keep our money here in town.”

Anderson said she has been direct marketing beef for 20 years. She also sells at the Eau Claire Downtown Farmers Market, and they sell some steers to Organic Prairie.

Anderson credited her stepfather, who was Trempealeau County conservation farmer of the year several times in the 1980s, with instilling her conservation ethic after moving to his farm as a child.

“It was always about taking care of the cattle and taking care of the land,” Anderson said. “He would tell me, ‘Without the soil, we have nothing.’ When I was introduced to grazing, it was like, wow, we can turn the tide on soil loss if we start packing carbon back down into the soil in the form of grass roots and having a lot of these highly erodible fields in permanent cover.”

“It seems like our part of the state is really becoming a haven for journeymen,” Anderson said. “It may be because, with the age of the farmers here, they’re more apt and ready to hand the baton off. We have several journeymen in the area that are doing a really, really good job. It’s exciting.”

Last June, Anderson had apprentice John Richmond graduate from the Dairy Grazing Apprenticeship program after two years of working with grazing master Charles Flodquist on his Chippewa County dairy farm. Flodquist is now gradually transitioning the farm to Richmond, a process that started with Richmond buying the cows in January.

“One of the advantages of the Dairy Grazing Apprenticeship program is you get somebody like Mary Anderson,” Flodquist said. “She kept us on track as a third set of eyes, someone you can bounce some ideas off, or if there’s a misunderstanding, you’ve got somebody to talk to. That actually is a pretty big deal.”

Anderson said students graduating from the DGA program who are then able to take over the farms they are learning on gives them a much-needed head start on their farming careers.

“With farmers not being able to get milk contracts, these young people would not otherwise be able to start farming because they would have no place to sell their milk,” Anderson said. “It’s really critical that we keep the contracts on the existing farms so that these folks can continue to pursue their dreams of being dairy farmers.”

Anderson is also co-producer, along with Trempealeau County Agriculture Agent Steve Okonek, of the Trempealeau County Community Television program “Farmer’s Corner,” which will be honored with an achievement award at the Best of the Midwest Media Fest, a regional public-access television awards ceremony, May 10 in Oshkosh.

Mahalko said it was through her appearances on TCCTV that he first became familiar with Anderson and grazing.

“I was watching public TV one time, and I see this lady, just as enthusiastic as can be, digging through cow pies on TV,” Mahalko said. “The way she can describe this: It’s not just a cow pie; this is nature’s perfect manure storage, composting, protective unit. It’s got a crust on it, and it’s never going to go anywhere except back into the soil, where it’s needed.

“I just thought, that’s awesome. I have to work with her and I have to get involved with these grazing people.”

“It’s almost like I eat, dream and breathe conservation. I just fell in love with the land as a kid,” Anderson said. “It’s been a busy career. I’ve used different tools and different job opportunities to continue to educate. I tried to even educate my little campers on the importance of saving soil.”

“What she has shown us is that there is a place in this time — when farms are consolidating and getting bigger and bigger and becoming industrial — for the small family farm,” Bergman said. “People really do care where their food comes from. There are people out there on small farms doing good work, raising things in a sustainable manner, and they’re really interested in improving their soils and the land around them. It’s really important that we support people like that.”

“(Grazing has) made farming incredibly fun for a lot of farmers, and Mary is the inspiration for that,” Mahalko said. “There are quite a few families that are still farming because of the work Mary has done.”