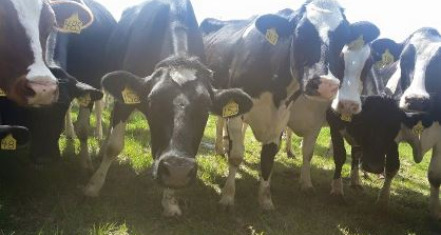 There is little doubt that Wisconsin is truly America's Dairyland. Dairy is a vital part of Wisconsin's economy, but there is concern for its future.

Statistics show the state has lost 8,700 farms in the last five years, and with the average age of farmers being 57 years of age, there is reason for this concern.

Even though there are people interested in the dairy industry, there are many barriers to farm ownership.

Realizing this need, GrassWorks, Inc., worked to develop a program and then joined forces with the Wisconsin Department of Workforce Development Bureau of Apprenticeship Standards in 2010 to establish the Dairy Grazing Apprenticeship program. Its mission is to provide a guided pathway to independent dairy farm ownership, developing grazing careers and strengthening the economic and environmental well-being of rural communities and the dairy industry.

The fruits of this program are beginning to appear out in the countryside.

Serwe actually worked on the Guell farm from little on. Bill Guell, his step-grandfather, picked him up when he was very young and brought him to the farm where he was always interested in learning and helping out.

The Guell farm includes Bill Guell and his brother, Bob, and his wife, Elaine. As the two brothers get closer to retirement age, they have been planning for a way to keep the business going.

Bill is on the board for the dairy grazing apprenticeship program, and the farm worked with a previous apprentice who later lost his life in an accident. Serwe graduated from the program a year ago and is now working his way into the business.

“In the program, I learned how to figure rations and picked up things from experience working with another farm that was a part of the apprenticeship program,” he said. “That grazing farm used robots to milk the cows.”

He then came back to the Guell farm invigorated with new ideas and enthusiasm.

Once Serwe has been with the Guell farm five years, he will qualify as a master grazier and will be eligible to join the other 35 master graziers around the state in serving as host farms for new apprentices.

Wisconsin's program is the only nationally funded program like it in the country. It has been successfully training young farmers for the last five years and is beginning to expand into other states.

The Guells operate what could be termed a “hybrid” grazing farm.

In the hottest part of the year, they bring the animals into the freestall barn or the compost barn for water and shade during the middle of the day, and then they graze at night.

“It's all about cow comfort no matter what system a dairyman uses,” Bill said.

With the “hybrid” system, they have most of their animals out during the lush times, and when it starts to get hot and dry, they have fewer out in pasture.

A typical dairy diet during the summer will be 8-10 pounds of high moisture corn and 15 pounds of corn silage together with 120 pounds of pasture.

They don't necessarily have all of their cows out on pasture, though, even when the weather is good.

As a rule of thumb, every fresh cow goes through the compost barn in summer months, as well as some of the older cows whose legs are not as good. They remain in the compost barn during the early part of their lactation, and then they move out to the pasture.

In winter, every cow is in the compost barn until it is bred, and then it is moved into the freestall barn.

The 68x200-foot compost barn gets a semi load of sawdust every two weeks. It is tilled regularly, and when they clean out the compost barn, it is spread on the pastures, eliminating the need to purchase additional fertilizer.

Guell said the compost constantly feeds the pasture and works better than urea, which is used up quickly.

With this system, the cows are under less stress and are productive in the herd for more lactations.

The Guells raise calves in groups of eight until they are weaned, and then they go to a group barn where they are introduced to electric wires and trained for pasture.

They began practicing managed intensive rotational grazing with their dairy herd 20 years ago, and they graze their 200 milking cows on the 220-acre home farm, while the dry cows and heifers are grazed on 100 acres of rented land.

They also raise 300 acres of conventional corn and alfalfa.

Bob explained that up until the mid-1990s, they were conventional dairy farmers, but it was getting expensive to keep up with the modern equipment and dairy grazing was becoming popular. They sacrificed some production but feel they have cut costs, and the farm is less labor intensive.