From GIs to Graziers: Midwest Servicemen Farm Together through Mentor Program

Master Dairy Grazier, Andy Bures, is a military veteran who is committed to helping other veterans get started in dairy farming through Dairy Grazing Apprenticeship. 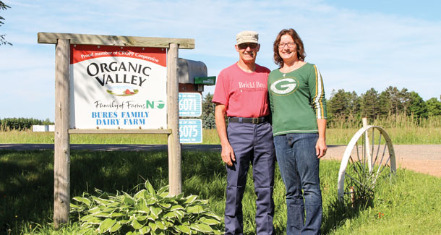 What essential skill do military veterans have that dairy farmers need? Flexibility, according to two retired army officers – one now a grazing mentor and the other his apprentice.

Andy Bures of Deerbrook, Wisconsin, left his family’s farm for Army basic training just four days after he graduated from high school in 1979. He was considering college but wasn’t sure what field he wanted to study, and he was also considering becoming a priest, but he also thought he wanted a family. His older sister had joined the army, so he decided to follow in her footsteps.

He spent most of his four years of military service in Germany, and when he was done, he joined the Army Reserve for 20 years. After his full-time service, he attended and graduated from St. John’s College, and two years later obtained his master’s degree at the University of Wisconsin.

He worked as a 4-H agent at an extension office for a year and then started working as a social worker at Shawano High School, near where he grew up. After 10 years of doing that, his dad was looking to retire from the farm, so Andy and his wife, Stephanie, decided to return to the home farm to raise their three children. About that same time, he retired from the Army Reserves as a first lieutenant.

Matt Keesling grew up in Denison, Iowa. Although it was a rural community, no member of his family farmed, and the area is now mostly large crop farms. 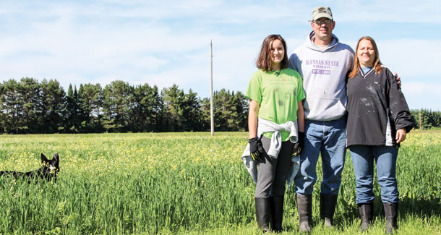 He joined the U.S. Army in 1993, immediately after high school. Keesling was enlisted as a cavalry scout and prime power specialist, working at power plants for 11 of his 24 years in the Army. He became an officer in 2004 and retired as a major earlier this year. His tours included three journeys to Iraq and two to Afghanistan.

Keesling made a career of the military but never forgot his idea to farm. In the different areas where he was based, most recently in Florida, he would often seek out a dairy farm in the area to visit.

In 2015, Keesling learned about the Dairy Grazing Apprenticeship (DGA) Program while searching for ways to transition from the military into farming. Although he knew he wasn’t going to retire until 2017, he decided to post an application.

He was shocked when he received several phone calls. “I thought since I was so far removed from agriculture, there wouldn’t be much interest in me as an apprentice.”

Bures had already had a two-year apprentice, and things had gone well, but he decided he wanted to seek a fellow military person for his next apprentice, if possible. Since being a mentor with DGA is a two-year commitment, Bures wanted someone a little older who knew what direction they wanted to go in life.

He wanted someone dependable, trustworthy, willing to learn and flexible. “All those character traits are important, but in farming you really need flexibility. On the farm and in the military, things can change constantly, and you need to be able to adapt based on what is going on around you, be it the weather or politics,” Bures says.

Bures knew a veteran would have the traits he was looking for, and he found the fact Keesling was an officer to be very appealing. They spoke on the phone and then Keesling and his wife, Tish, visited the Bures family farm in northern Wisconsin.

Keesling says after that visit, they knew it would be a good fit for many reasons – one of which was the potential for a long-term plan, not necessarily just the two-year apprenticeship. 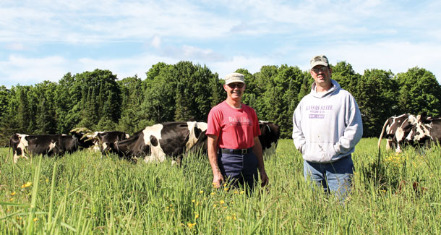 “To be successful in the military you need to be organized, handle different situations with fluidity and shift gears quickly when needed because of things like the environment you are in and enemy situations,” Keesling says.

“And in the military, sometimes you have to do things you don’t necessarily want to but you know you need to get them done, so I already knew I was capable of that when needed.”

Bures milks 45 cows in an organic system, utilizing a management intensive system. He has about 40 acres of permanent pasture, and an additional 60 acres are used for winter feed production along with pasturing. The cows are milked in a swing-eight parlor.

Bures doesn’t push for high milk production but rather looks at the bottom line of what ends up in his bank account at the end of the day.

Bures says he likes to keep teaching his apprentice rather informally and hands-on, and he shares information as things come up and seasons change. Bures and Keesling watch the cows eat their grain in the morning and usually talk for a while.

The Keeslings have both been learning the ropes on the farm, and Tish and Steph are capable of milking and doing other chores if other obligations, such as harvesting, keep the guys in the field.

“I’ve been learning a lot,” Keesling says. “I try to think of the big picture of this apprenticeship as building a strong foundation for future decision-making. Don’t try to force too much success too early; what I thought would be big decisions aren’t so big if you take the time to gain the knowledge needed for the foundation. It’s been humbling to take a step back, keep moving forward and letting farming and this lifestyle come to us.”

It’s also important to maintain balance of family and farm, Bures says. “If all we do is work, then we are not fulfilling our purpose on Earth. Teaching an apprentice has helped to keep my life in balance.”

Having an apprentice on the farm has also given Bures the flexibility to become a deacon in his church; faith is an important part of life for him.

Most people know veterans can access funds for college through the GI Bill, but veterans can also receive GI Bill benefits through the DGA program because it is federally registered and taught by an accredited institution. To learn more, go online (www.dga-national.org). end mark

PHOTO 1: Andy Bures and his wife, Stephanie, returned to his family’s farm after more than 20 years of military service and 10 years as a social worker.

PHOTO 2: Matt Keesling came across the Dairy Grazing Apprenticeship program when researching ways to transition from the military to farming. He’s pictured with daughter Sarah (left) and wife Tish (right).

PHOTO 3: Andy Bures (left) serves as the mentor to Matt Keesling (right) in the Dairy Grazing Apprenticeship program. It’s a good fit for the two veterans, with potential for a long-term partnership. Courtesy photos.

Kelli Boylen is a freelance writer based in Waterville, Iowa.