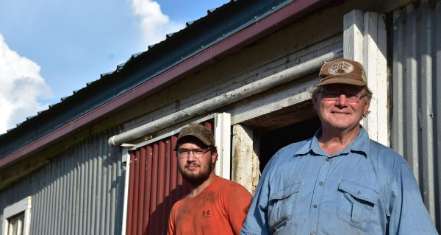 BRANDON, MN — A first-generation dairy farmer is getting a start in a more efficient and environmentally sound setup with assistance from the USDA’s Natural Resources Conservation Service and guidance from the longtime organic farmer whose operation he’ll eventually own.

A remodeled parlor style barn, new manure storage facility and 59 acres of additional pasture for rotational grazing will make chores less back-breaking, allow the dairy to expand — and protect both groundwater and surface water in the Upper Chippewa River watershed. 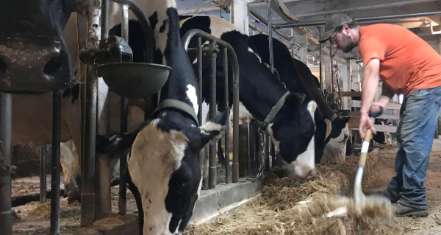 Schouweiler is remodeling the barn at his own expense. Leveraging a combined $247,000 in Environmental Quality Incentives Program (EQIP) assistance from NRCS and Clean Water Funds from the Minnesota Board of Water and Soil Resources made the manure facility and pasture expansion possible. As a beginning farmer, Schouweiler qualified for higher NRCS payment rates.

“Otherwise, we couldn’t do this,” Wagner said of NRCS and Clean Water Fund assistance. “I couldn’t afford to borrow that kind of money, and (Schouweiler) doesn’t have the assets to borrow against.”

What Schouweiler does have is a “fire in his belly” for farming, Wagner said, and a talent for working with cattle.

“I’m starting to call him the cow-whisperer. When he works with cattle, they seem to respond to him so easily. He’s got cattle sense that you can’t teach. He’s going to be a better cattleman than I ever was,” Wagner said. “He sees calves are sick before I do. … Heifers, they don’t get startled with him.”

Schouweiler grew up on a hobby farm 18 miles from Wagner’s 38-cow organic dairy, and has milked cows for more than a dozen other farmers. He wanted a farm of his own. Wagner’s children had no plans to farm. He was looking for someone to take over.

They met at a 4-H rabbit show.

But Schouweiler was only 14. Wagner wasn’t sure what would come of the conversation. Two years later, he got a call. It was Schouweiler, wondering when he could start milking.

“With milking, no matter how fast you go, it still takes the same amount of time. It’s just relaxing, the actual milking part of it,” Schouweiler said. “You’ve really got to like cows.”

On June 1, 2020, Schouweiler became the owner of the dairy herd.

It’s one milestone among many in two years of intensive planning. Schouweiler plans to rent — and eventually buy — Wagner’s machinery and land, as cash-flow allows. Meanwhile, Schouweiler is learning about fieldwork and crops from Wagner. Together, they run about 440 acres of cropland and pasture.

Wagner said he could have sold to farmers who would have absorbed his land into the thousands of acres they already run. But he’d improved soil health over the years, and didn’t want to see those benefits disappear.

“I want to preserve what I worked for, and he wants to take it to the next level — and that’s something unique,” Wagner said.

Together, Schouweiler and Wagner completed a program through the nonprofit Dairy Grazing Apprenticeship, and a farm business management program through Alexandria Technical and Community College. Schouweiler earned a two-year dairy management degree from Willmar’s Ridgewater College in May 2019 — the one condition his mother placed on supporting his decision to farm.

“I talk to a lot of older farmers and they (say), ‘Well, I write it up on a sticky note,” Schouweiler said of tracking business expenses. While a lot of his figuring starts on paper towels, “It’s nice to have those numbers in perspective.”

Building a new manure storage system to replace a decommissioned manure pit allowed Schouweiler to use the milking barn on the farm he bought from Wagner’s retired brother, Robert, a mile down the road. When the cows move out of Wagner’s tie-stall barn — a setup that’s harder on the back — Wagner will continue to rotationally graze heifers on his farm.

The new, 400,000-gallon lagoon at the remodeled barn site has the capacity to hold 12 months’ manure.

The area was among those identified through a 2017 Clean Water Fund grant, which led to work in Millerville Township and parts of Ida and Leaf Valley townships.

Douglas SWCD initially targeted the area based on Minnesota Department of Health nitrate testing of 1,864 wells in nine Douglas County townships. On average, 1.7% of the wells tested exceeded the state’s allowable limits. MDH has linked nitrate to blue baby syndrome.

“By either eliminating existing pits that aren’t in compliance, or (reconstructing) those that are still being used, the groundwater resources in that area will be better protected,” said Jerry Haggenmiller, Douglas SWCD coordinator. “As a secondary bonus, any runoff into surface waters will be corrected by these ag waste system (upgrades).”

The 130-mile-long river flows from Otter Tail County to the Minnesota River at Montevideo. Its watershed encompasses 2,080 square miles in parts of Otter Tail, Douglas, Grant, Pope, Stevens, Swift, Kandiyohi and Chippewa counties and a bit of Stearns County. Among the concerns within the watershed are sediment, phosphorus, nitrogen and bacteria.

“Whatever protection we can do here is going to benefit everybody all the way down,” Haggenmiller said.

Converting marginal cropland to pasture is among the protections that benefit water quality.

NRCS grazing lands specialist Jeff Duchene writes 70 to 100 grazing plans a year for producers within 20-some northwestern Minnesota counties including Douglas County. Over the past 10 years, he said rotational grazing has caught on throughout the region.

“As you get more people implementing better grazing management, it seems like you just get more interest,” Duchene said. “Then I think the farming environment has changed, where people see the value of doing things differently.”

As land values increased, Duchene said producers turned to pasture management as a way to raise more animals on existing acreage. Commodity prices were another factor.

Duchene initially worked with Wagner to establish his rotationally grazed pasture. His most recent 50-acre enrollment — bordering a wetland, with steep slopes that made it difficult to farm — grew out of a discussion during a field day Wagner hosted a few years ago. Schouweiler enrolled 9 acres of the land he’s renting.

“Probably the biggest challenge on Ben’s site was the soil wetness. He’s got a couple wetlands near the farm site that the pasture goes around. He had been trying to farm some of those soils. It was poorly drained, and marginal cropland,” Duchene said. “With well-managed grazing, you can really minimize your impact as far as water quality and reduced soil erosion.”

Grasses will grow where crops were spotty. EQIP assistance will offset expenses tied to seeding, extending water lines and fencing. 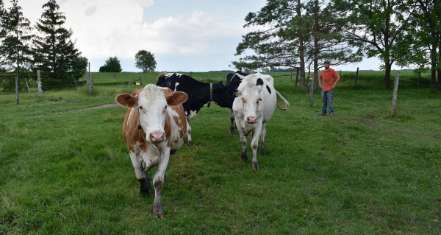 By buffering the wetlands, the pasture will decrease the potential for runoff. While that land may be too wet for grazing part of the year, Duchene said it will serve as drought insurance — remaining productive longer, even if it doesn’t rain for a few weeks. The site will balance some of the drier upland pasture on Schouweiler’s rented farm.

The new setup plus more pastureland will make it possible for Schouweiler and Wagner to eventually milk up to 70 cows.

“I feel so blessed that this has happened. I don’t know how I’d be running the farm without his help,” Wagner said.

The Minnesota Board of Water and Soil Resources’ mission is to improve and protect Minnesota’s water and soil resources by working in partnership with local organizations and private landowners. www.bwsr.state.mn.us