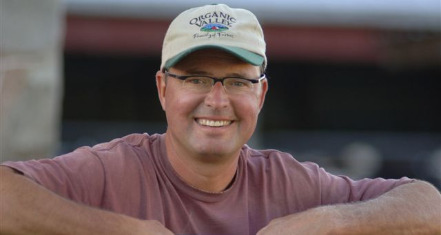 For a German city boy who wanted to farm, the yearning was fed by internships in Germany, Canada and Wisconsin.

The dream of farming came true for Altfrid Krusenbaum, who now has his own grass-based dairy farm near Elkhorn. He's been in Wisconsin for 28 years. Today, one of his passions is helping other people who have that same passion to farm.

His 300-acre farm includes a herd of 140 dairy cows that calve seasonally in the spring so they can go out on the grass. He also grass-finishes 35 dairy steers for beef.

Krusenbaum, who spoke at a recent Columbia/Dodge winter grazing conference in Randolph, has been active in supporting the Wisconsin School for Beginning Dairy and Livestock Farmers at the University of Wisconsin and the state's Dairy Grazing Apprenticeship program.

But he's begun his own approach to fostering the next generation of dairy farmers - share milking. It's a way for young couples to get into farming if they are willing to learn and work on another's dairy farm. Krusenbaum stresses that these share milkers should be couples because he feels there's just too much work for one person alone.

More and more entrants, in the many programs to help beginning farmers in the state, are from non-farm backgrounds and need to acquire hands-on skills, he said. Many young people don't have the capital to begin farming, they're bound in a traditional outlook on farming or they lack a positive outlook. He sees the state's programs, including his own share milking program, as a way to potentially cure some of those ills.

The UW's School for Beginning Dairy Farmers (before the “Livestock” was added) was begun by grass-based dairy farmers who saw the need for a formalized program to get new farmers started in the state. They approached the Center for Integrated Agricultural Systems (CIAS) to get it started.

The first students were from the UW Farm and Industry Short Course as well as students from the four-year farming programs at the university.

“This is really the only thing like it offered anywhere in the nation,” he said.

The course is expanding from its Madison location via the use of distance learning where students can follow seminars live on the internet and interact with the moderator.

Krusenbaum said that the students in Madison right now range in age from 19-55 years old. They study a winter curriculum, go on farm tours, attend conferences and can take advantage of internships. Their course of study includes business planning and all are encouraged to write a formal plan for their future farm so they can set and achieve goals into the future.

Speakers and mentors include successful farmers, UW specialists, ag lenders, veterinarians and successful business leaders. The program has been going for 19 years and 440 students have gone through it. “More than three-quarters of them are farming and 50 percent of those have their own farms.”

The school has been supported by cooperatives and association who see the need to add new farmers to the agricultural economy in Wisconsin. Grass-based livestock production methods were chosen because the need for capital is less with these kinds of systems.

With the UW program up and running, many in the industry felt that there was a need for an accredited career path for the people who wanted to get their own farm started. Grassworks, a state grazing organization helped create the Dairy Grazing Apprenticeship to help create a pathway to farm ownership for these future farmers.

The program includes 4,000 hours of paid training over two years - 3,712 hours of on-the-job training and instruction by the master grazer as well as 288 hours of related classroom instruction in collaboration with the state's Technical College System.

Randy Zogbaum, the agriculture instructor with Madison Area Technical College noted that it is the first registered farm apprenticeship program in the United States. “It's a huge accomplishment.”

The program allows the beginning farmer to develop skills and network with the dairy industry in the state.

For the master grazer, the program provides a “quality, ambitious, driven individual” who becomes a skilled worker by the end of two years, says Krusenbaum. The program also opens up the potential for a farm transfer from the mentor to the beginning farmer.

There are currently 28 approved Master Grazers who can take apprentices - but he says the program always needs more. The program has generated seven graduates. Three of them have their own farms, three are in equity-earning positions and one is a farm manager.

Over 60 candidates are waiting placement.

What students in so many of these programs have in common, he said, is the “dream to farm.”

Krusenbaum has trained interns on his farm for 20 years but was really dissatisfied with how many ended up on working farms. They were lacking in business skills and had no equity.

In 1996 he learned of the share milking model in New Zealand, a country where milking cows is the number-one desired job among its citizens.

“With share milking they earn equity and hone their management skills. At the end they have a profitable tax record and equity. The risk is taken away from them.”

Krusenbaum has created a share milking program on his own farm because he feels it's a great opportunity to pass on knowledge, assets and a legacy to a new generation. For the mentor, it's also a way to slow down a bit while still earning income from the farm. “There's a great satisfaction to getting another farmer started.”

Like any social contract there has to be negotiation between the two parties. Share milkers provide most of the labor and management related to livestock and pastures. The farm business owner provides all the forage that can be produced in an average year, an existing land base and all the necessary machinery and facilities.

The beginning farmers also get the ability to raise their heifers on the farm and Krusenbaum provides them with the farm house to live in. He said in general this provides about $45,000 in net farm income for the share milking couple and about 55 head of cattle after three years.

In New Zealand, he said, these kinds of arrangements have evolved into strictly cash models but he wanted to incorporate cattle ownership into the program because he felt it would give the beginning farmer more “buy-in” and get them involved on a higher level.

In addition to the income stream, share milkers are responsible for 18 percent of most variable expenses and the utilities at the house, he said.

Krusenbaum has been using this model since 2006 and admits it has had its ups and downs. “The biggest drawback is that very few people want to do it. It's amazing how few applicants we get. I don't know why it's not more attractive to more people.”

For this kind of program to work, he said it is important to have on-farm housing for the share milking couple. “I really feel it's important for the share milker to live on the farm.” He recommends a trial period so both parties can feel comfortable with each other and the arrangement. “Anything can be fixed unless the personalities don't work out.”

Krusenbaum feels that beginning farmers need a firm foundation under them, like the one they could gain from share milking or the apprenticeship program. He noted that of the dairy herds being sold through the Richland Center sale barn this year, one-third are those that started up in the last three years.

The state's programs are a way for new dairy farmers to forge a career path.

Krusenbaum urged his grazing listeners to apply to become master grazers in the apprenticeship program and to consider share milking as an option.