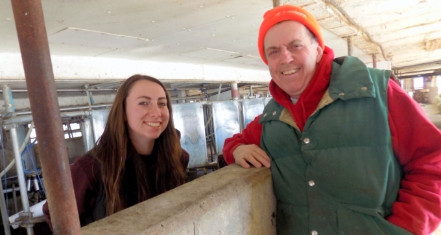 FARMINGTON — Henry and Teresa Hardy operate a dairy farm and are doing their part to ensure the industry doesn’t die out.

They have been a host for the New England college agricultural tour that visits Maine every three or four years, Henry said on Tuesday, Jan. 10. Some 50 students and educators from across the region were expected to make a stop that day after touring Conant Acres in Canton that morning before visiting the Flood’s robotic dairy later that afternoon, he noted.

Arrival of the group was delayed after spending more time than expected at the first stop, farm intern Abby Weisberg said. She had gone to Conant Acres to experience the tour there. She said people asked questions she wouldn’t have expected, such as why the breath coming out the cows’ noses could be seen. [Hint: because their body temperature is warmer than the air around them.]

“This is the third time we are doing the tour,” Hardy said. “Dave Marcinkowski, [dairy specialist with UMaine Cooperative Extension] is the head, organizes it. This is his last year, he is retiring.”

Weisberg is a participant in Dairy Grazing Apprenticeship, Hardy said. “She will have been here two years in July. She came right out of high school from Florida.”

The Hardys are approved mentors for the Dairy Grazing Apprenticeship program which has over 200 mentors in 15 states nationally that have provided over 650,000 hours of on-farm training and related coursework in managed grazing dairy production to hundreds of aspiring farmers from across the nation, according to the website. There are 230 applicants seeking entry into the three programs offered, it notes.

In addition to working on the farm, Weisberg is taking seven classes related to dairy management, herd health and related fields.

Hardy Farm ships its milk to Organic Valley. It kicks in some support for the apprenticeship program, Hardy said.

“It’s a nationwide program,” Weisberg said. “People sign up, fill out personal information. They ask about personality, military, what experience you have. Once you submit the application it gets sent out to every farmer in the program, then they go over your profile and reach out to you personally to say they are interested in having you work for them, would you like to meet.”

Weisberg held Zoom meetings with the Hardys and a few other farms, then narrowed her choices down to two. “One week in June my dad and I flew out to here and Wisconsin,” she said. “We toured the barns and it was a very easy decision of where I wanted to go. It was nice.”

Hardy said they interviewed several candidates in the program. “What clicked for us was her background of showing and appreciating the genetics side. We had a few meetings, she came to see us and it kind of took off from there.”

Weisberg moved to the farm two weeks after meeting the Hardys.

“I did the show side growing up. In high school I showed all over the place so it was nice to keep that knowledge going and get more experience under my belt.”

Hardy said Weisberg is on the young side, not yet 20 and was able to finish her 4-H career with another year when she got to Farmington.

“I got better at dairy judging,” Weisberg said. “While I was here I ended up competing nationally in Louisville, Kentucky. I never thought I would get to that point. If you get the right resources you can learn a lot, go very far.”

The program has been fun, Weisberg said. “A lot of lessons learned and not just from every day. It’s the mishaps, the experiences, because that is how you learn. You figure it out as you go.”

It is not just something read in a textbook, Hardy noted.

“It’s more than the dairy stuff,” Weisberg stated. “I’m learning personal things, no longer having mom and dad and learning how to be on my own as well. Living and working with new people, understanding new ways of living you have never really seen before. It is a whole new world.”

Weisberg said her parents have different perspectives, don’t see things the same way she does. They support her but don’t understand.

“It’s funny bringing the two together and explaining, “I stuck my arm up a cow’s butt today,” but it’s cool at the same time. It’s very interesting, they had no interest in it. I got into dairy through FFA in high school.

Weisberg said she found this program, it was just what she wanted to get the experience to understand, “Do I really want to do this, pay the money to learn this or find something else? You like the concept of it but do you like the every day of it?”

Weisberg said you have to learn it, “can’t just choose one day that this is what I want to do without any experience. It’s learning by doing. I love the field, the industry and want to keep going in it, maybe not this part of it.” 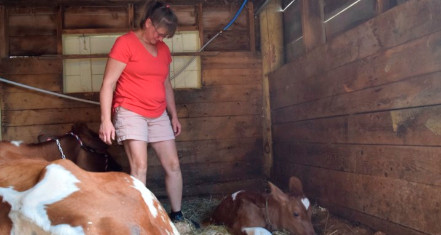 Teresa Hardy and her husband, Henry operate Hardy Farm in Farmington. They participate in Dairy Grazing Apprenticeship, a national program that provides hands-on learning experience for those interested in the farming industry

“She has done fabulous, taking on things,” Hardy said. “She is smart, picks up on things without having to be told and retold and still not getting it. We are able to take a day off once in a while and she can handle it.”

Weisberg knows the animals really well, knows their names, knows the calves’ names better than he does, Hardy noted. He often looks to her to name a particular cow when the milk tester comes to record each cow’s production.

“It’s fun, Weisberg said. “We have gotten a lot of laughs out of this program. In the end chores need to be done, why not be happy, joke around about it?” She admits one of the things learned about her is that she jumps easily and the Hardys often take advantage of that.

Weisberg has been accepted at Virginia Tech in Blacksburg, Virginia, where she will study dairy science.

The Hardys plan to continue in the apprenticeship program, are building a small house for future participants. The interns are all ages, have varied backgrounds, some have families, Hardy said.

Organic Valley sees the need for getting young people into the farming industry, Hardy said. “The average age of farmers is not getting any younger, they are getting older. It could be an issue down the road.”

Randy Bates and his wife Jill [Hardy’s sister] have a dairy farm in New Vineyard. “Their apprentice in the program has the intention of taking over the farm when Randy and Jill want to retire,” Hardy said. “That’s what the word is right now. He comes from California, I am not sure what his background is.”

In 2000, there were close to 500 dairy farms in Maine, according to a May 2019 article in the Sun Journal. “By 2018, that number was cut in half to fewer than 250. Mass-producing farms, largely in the Midwest, are pumping out milk at rates that create a national surplus,” it reported. “As more milk is being produced, the demand is starting to go down as milk substitutes derived from almonds, coconuts and rice have increased in popularity.”

“[The Bates’ apprentice] told everyone 90 days into the program, “I’m going to take over this farm,”” Weisberg said. “There are so many ways you can take this program on. Me, to get experience, figure out what direction I want to go. There are people doing it so they can take over the farm, or for filling time and it sounds fun to do. It just depends on how you are looking at it.”

Over the last two years Weisberg has realized she is not a natural farm hand. “I can handle it but it’s not my paradise,” she noted. “But now I know that, I didn’t before.”