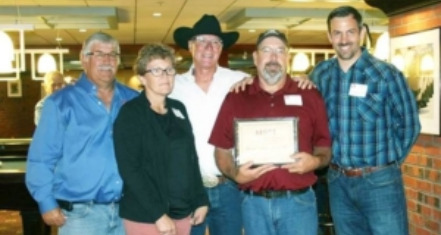 “At Horizon, we’re grateful for the opportunity to work with nearly 700 dedicated and passionate farmer partners across the country,” said Tyler Holm, General Manager of Horizon. “We’re humbled by their diligence and hard work, and appreciate that they do so with an eye toward long-term sustainability. We are pleased to honor the Molitors with this year’s HOPE Award for their commitment to organic advocacy and to recognize the Putnams with our annual National Quality Award for producing the highest-quality organic milk across our milk supply.”

Joe and Tom Molitor grew up on the farm that they operate today. The farm has been in the Molitor family since 1928, with Joe and Tom taking over operations in 1981. Over the next 20 years, the Molitor brothers grazed their animals and used holistic animal care. When organic farming started to become popular in the Midwest, the brothers decided to fully transition to organic, and in 2005, began shipping milk to Horizon. Today, the Molitor farm has 300 milking cows on 1,100 acres.

Joe and Tom divide farm responsibilities, with Joe handling the herd and farm records and Tom overseeing the organic plan and soil health. Joe has eight children ranging in age from 14 to 32 years old. Tom and his wife, Mary, have four children ranging in age from 15 to 21 years old. Though some of the older children have moved away from the farm, Joe’s daughter, Hannah, continues to work on the farm as a herdswoman. Joe is mentoring her in the Dairy Grazing Apprenticeship program of Minnesota.

For more than a decade the Molitors have also helped several local farms get started in organic farming, offering advice on the process and selling organic heifers. Additionally, they regularly host school tours, giving children an opportunity to experience and learn about organic farming. The Molitors also participate in FFA and 4H judging on their farm and sponsor a local softball team.

Other Award Recipients
John & Janine Putnam of Thistle Hill Farm in North Pomfret, VT were awarded the National Quality Award, which recognizes the Horizon farmer partner who produces the highest-quality organic milk in Horizon’s milk supply. In addition, Reuben and Catherine Yoder of Yoder Family Farm in Dundee, OH and Joe and Kathleen Hescock of Elysian Fields in Shoreham, VT received HOPE Award honorable mentions. Horizon brought this year’s award winners to the annual Farm Aid concert in Burgettstown, Pa., on Sept. 16th, and honored them at a dinner on Friday, Sept. 15th.

Getting Serious About Our Next Generation of Farmers