Dairy graziers, Clay and Sue McQuiddy, give back by becoming Masters for Dairy Grazing Apprenticeship and sharing their knowledge. 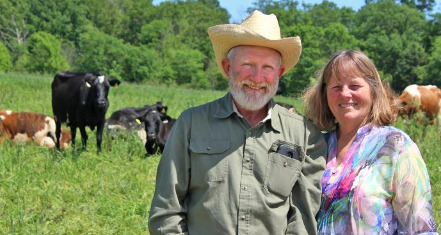 Clay and Sue McQuiddy were not raised with a dairy background, but through a willingness to learn, work and through steadfast perseverance, they built a dairy grazing system in Missouri that has provided for their family for the past 26 years.

They owned a laundromat. Clay was from Texas and grew up around beef cattle. Sue was from Oklahoma and lived in the city. Neither had ever milked a dairy cow. Still, that did not deter the couple from finding a farm in southwest Missouri and starting a grazing dairy operation.

However, dairy was not their first choice. They started raising sheep. Then they pasture-raised chickens until finally settling on dairy farming. In 1996, the couple began a grazing dairy.

Grazing cow
The McQuiddys purchased 60 Jersey cows to run on their 190-acre farm in just outside the small town of Graff. They soon realized the need to expand. Instead of purchasing more Jerseys, the couple added Holstein cows. It was the start of a crossbred program that still exists on the farm.

Holstein calves are stronger and have more of an ability to thrive than Jersey calves, Clay says. However, Jersey cows have better milk quality and are better able to handle the heat. In a grazing dairy, that is a must.

The milking herd grew to 150 cows.

As the couple's son, Steve McQuiddy, entered the operation, the farm expanded. Sue and Clay purchased a new farm across the holler where they started managing 400 cows on 400 acres of grass.

Grazing basics
The McQuiddys do not grow their own hay, so extra grass is worthless. They focus on growing forage that cows consume year-round. They have both cool-season and warm-season paddocks.

Clay is partial to two species of forage. “We like annual ryegrass and crabgrass,” he notes. And of course, there is clover. One thing not in the pasture is fescue.

“We renovate not to have fescue,” he says. They start by planting crabgrass and annual ryegrass. Then they spray to kill the fescue. Once the fescue is gone, they ramp up seeding for permanent forage.

It is an intensive grazing system, with the farm divided into roughly 40 paddocks. Given the topography of the farm, with its rolling hills, tree lines and creek beds, not all of those paddocks are the same size. The McQuiddys offer their cows roughly 3 acres per day, which allows each field to have a rest period.

Since it is a grass-based dairy system, the family also uses an irrigation system on some fields to facilitate forage growth.

Electric wire separates each section. Some wires are permanent, Clay explains, while others are temporary. Water is provided in between paddocks and is served by a well system.

Benefits for dairy future
Simply put, grazing dairies are a low-cost way to get into the dairy business.

“We stay away from 'heavy metal disease,'” Sue says. The family reigns in purchases of machinery or equipment. They do not harvest hay by mechanical means. “We let the cows do that,” Clay adds.

The couple finds that any money they invest in parts that move goes down in value. So, they keep their money invested in cows and the land.

While the grazing systems require movement of cattle twice a day, it is far less laborious than other systems, Clay says. They do not spend time making silage or haylage, or feeding or cleaning barn bedding.

“It is definitely a system that allows young people or those wanting to dairy to enter the business,” Clay says. And the couple is doing their part to usher in the next generation of dairy producers.

Individuals can be any age or at any stage of life. Their current apprentice is 40 years old. “We want to help them understand what it takes to make it in the grazing dairy business,” Clay says. “From grass management, to milking to raising calves, they get it all through the program.”

The dairy grazing apprenticeship program is popular in states like Wisconsin and New York. It is just starting to get a foothold in southwest Missouri. Currently, there are three apprentices in the state. “We are looking for more,” Clay says.

The two-year program involves on-the-job-training as well as online coursework. Apprentices learn only from Master Dairy Graziers like the McQuiddys. The dairy farmer pays a wage to the apprentice for work on the farm. They work roughly 2,000 hours per year.

Clay and Sue hope that apprentices leave their farm with an understanding of what it takes to manage a dairy grazing system, including how to manage forage, keep records and raise calves.

Ultimately, they hope the next generation of dairy farmers discovers a passion for the industry. “It has been a good life for us,” Clay says. “We enjoy dairy farming,” Sue adds.