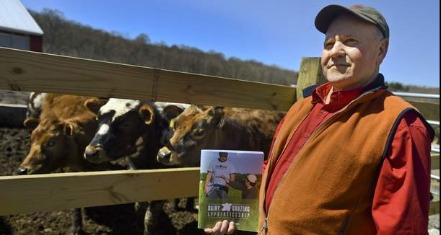 MANNSVILLE — A small-dairy-farm supporter with Cornell Cooperative Extension wants to bring an educational program about grazing to the north country, using it to bring new farmers to the industry.

Three Central New York dairy farmers and their three apprentices are participating in the Dairy Grazing Apprenticeship, created in 2010 and established as a national program in 2015, that connects prospective farmers with “master graziers” who will teach them about operating a managed grazing farm.

A. Fay Benson, who works for the extension’s Southern-Central New York Regional Dairy and Field Crops Team, said he wants to expand the program.

Mr. Benson, a local education coordinator for the program, said he came to Jefferson County on Tuesday to encourage more dairy farmers who use managed grazing, or feed their livestock by rotating them through different pastures on their property, to sign up as master grazers and teach prospective farmers at a time when many small dairy farmers are leaving the industry. Ten farmers throughout the state have already signed up as master grazers.

“We felt that (managed grazing) is a good method for young people to own their own farm,” he said. “We just see this as an opportunity.”

While conventional dairy operations require farmers to spend more for labor, feed and equipment, Mr. Benson said he felt managed grazing served as a gateway into farming for younger generations because livestock harvest their own food and spread their own manure.

Mr. Benson said he introduced managed grazing to his own farm in the 1980s.

“I just had to move the cows,” he said. “I also had healthier cows. Better feet for walking.”

Apprentices participate in the program for two years, spending 3,712 hours working for and learning from their master grazers and 288 hours taking classes and participating in peer discussion, pasture walks, networking and development training, according to the program’s website.

Mr. Benson said once apprentices complete the program, they become journeymen grazers and earn certificates that allow them to work for farmers who use managed grazing, apply for Farm Service Agency loans to start their own farms or work for and possibly take over their master grazer’s farm once they retire.

Compensation varies but Apprentices in New York are paid a minimum of $9.70 per hour with 6.25% raise every six months when working for their master grazier. Some farmers also supplement wages with in-kind compensation (housing, cattle, food, etc).

“(Masters) appreciate having someone on their farm,” Mr. Benson said.

Mr. Morse said he hopes the program encourages more people to use managed grazing, adding that thousands of acres in Jefferson County are suitable for it. Mr. Morse rotates his approximately 60 cows through pastures on his 495-acre farm, sending them to a different paddock every 12 hours and sectioning them off using portable fencing.

“It’s important to get young people into farming,” he said.

Ronald A. Kuck, dairy and livestock educator for Cornell Cooperative Extension of Jefferson County, said he was willing to assist to help bring the program to Jefferson County.

“Whatever Fay wants me to do,” he said.

Prospective farmers interested in signing up for the apprenticeship program are encouraged to visit its website: https://www.dga-national.org

Getting Serious About Our Next Generation of Farmers