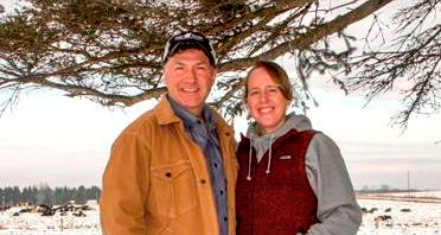 MEDFORD, Wis. – Just beyond the northwestern limit of Marathon County, Wisconsin, lies the unincorporated village known as Gad in Taylor County, Wisconsin. Just east from there, beyond the long-defunct Gad cheese factory, lies the original farm where Joe Tomandl III and his wife, Christy, began their dairy-farm-ownership career in 1998. They purchased 40 cows and an 80-acre dairy near Medford.

Even before the 1998 purchase the Tomandl family was working to implement conservation practices on the farm with Paul Daigle, the Marathon County conservationist, and with the U.S. Department of Agriculture’s Natural Resources Conservation Service.

“I hadn’t even met Joe or Christy (yet),” Daigle said. “They were still in the process of making the purchase.”

Daigle met with Joe Tomandl’s dad and Andy Hager, the University of Wisconsin-Division of Extension agent in Taylor County. Daigle said they all shared a vision of creating a viable dairy-grazing farm. Soon after Daigle met the younger couple; they worked together to develop a grazing plan for the startup dairy.

“Conservation was intrinsically part of the way they farmed,” he said.

One of the conservation highlights on the Tomandl farm is a wetland that Daigle helped design. As the dairy herd grew it became necessary to cross a “narrow swale that opened up upstream,” as Tomandl described it. Daigle helped design a 6-foot-high berm that was shaped to form a lane. It also ponded 9 acres, converting them to a shallow wetland the entire Tomandl family enjoys.

Joe Tomandl said it’s one of his favorite parts of the farm.

“Each spring and fall we get all types of birds coming through,” he said.

Through time, cattle lanes, pasture seeding, waterlines and fencing were completed to create a managed-grazing infrastructure capable of withstanding the rigors of northern Wisconsin’s varying soil types and climate. By 2010 the farm had grown to 180 cows and 320 acres. They didn’t stop in creating more acreage dedicated to managed pasture in an area where land is being converted to row-crop production. The Tomandls implemented what they call “scaling with integrity” to grow their dairy-farm business model.

The Tomandls are former agricultural educators who met while attending UW-River Falls, where each earned a bachelor’s degree in agriculture education.

“If we’d have done what we learned in college, we’d have doubled our 180 cows; added feed storage, manure storage (and) more barns; and milked 300-plus cows on this 320-acre farm,” Tomandl said with a characteristic laugh and smile. “We’d have made money and could have done it, but we’d have to reduce our grazing acres and the amount of dry matter going through the cows from grazed pasture.”

“Maximizing grass utilization is where we make money,” he said. “Wherever we can reduce the expenses of equipment costs, feed storage and manure hauling – that represents our best potential for economic return.”

If they had followed the model of doubling the herd size on the existing farm they would have likely needed to double cow numbers again down the road, he said. But with some 600 cows the grazing platform of the herd would be practically non-existent. That model would lead toward more expansion and a $10-15 million investment in concrete and added facilities.

“That would lead to a zero-grazing system where we would haul in mono-culture feed sources like corn silage to produce milk,” he said. “Where do you go with it next in an expansion model like that?”

That led to scaling with integrity, the idea the Tomandls favor. It involved purchasing a nearby farm and basically replicating their existing model.

“We bumped up to 300-plus cows but it was on two different facilities,” he said.

Scaling with integrity allows them to utilize the efficiencies of managed grazing while keeping the soil covered and protected. And there are social benefits as well, he said. Another working family is added to the community and the environmental benefits of grass on the landscape as a climate mitigator is accomplished.

In 2020 when their second farm was at 175 cows, the couple replicated the model again by adding a third farm to the model. The third farm now has lanes and the grazing infrastructure to utilize another 200 acres as managed pasture.

“Now we’re running three 175-cow dairies independently with a good conservation profile and ratio of cows to land base,” Tomandl said. “This is our method of scaling in the managed-grazing industry.”

He calls the three farms “beta farms.” The model could milk 1,000 to 1,200 cows but it would happen on five or six farms. And a by-product of the model is revival of rural communities.

Mirroring the Tomandl progression of developing three grass-based dairies is the growth of the Dairy Grazing Apprenticeship, an innovative 501c3 non-profit organization that partners with established grazing-dairy farmers, universities, community-based organizations and other stakeholders. Tomandl is currently the executive director. He’s been instrumental in creating a two-year work-based program that links seasoned mentor graziers and aspiring dairy graziers – with the ultimate goal of transferring grass-based dairy farms to new owners in multiple states.

“The Tomandl farming journey has embodied conservation principles and touched people far beyond the boundaries of Wisconsin,” Daigle said.

This is an original article written for Agri-View, a Lee Enterprises agricultural publication based in Madison, Wisconsin. Visi Agri-View for more information.