Community Rallies for Maine Farmer After He Gets a Concussion

As an injured Maine dairy farmer recovers from a frightening accident, Apprentices Josh Harlan and Haden Gooch of Wolfe's Neck Farm pitch in to make sure the work gets done. 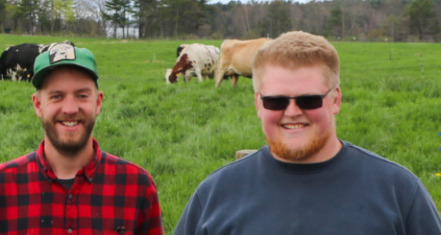 Six weeks ago, New Vineyard dairy farmers Randall and Jill Bates were trying to get a cow out of the barn and into a trailer when the unthinkable happened.

The 1,400 pound cow was balky and uncooperative with Randall Bates, who was leading her with a halter rope. Suddenly, she pulled on the rope and Randall went down hard. As he fell, the cow’s head hit his face, causing multiple fractures around his forehead, eyebrows, eyes, nose and mouth. Then he hit the concrete, smacking the ground with the back of his head.

“The sound was horrific,” Jill Bates said. “Oh, my word. It was a huge, loud crack.”

She and two contractors who were working nearby raced to Randall’s side.

“That’s when the scary part happened,” she said. “All of a sudden he started bleeding from his face. I thought it was coming from his brain and I just thought, ‘oh no.’”

They called the ambulance for help and as they waited, Bates’ pain seemed unbearable.

“I thought he was dying,” Jill Bates said.

She wasn’t the only one.

“We both love the Lord,” she said. “Randall was mumbling some things, and I put my ear down so I could listen. I heard ‘please take me.’ He was in such pain, he was asking the Lord to take him. I thought, oh Lord, please, don’t leave me with all this.”

Part of “all this” is Springside Farm, which the couple started in 1987 with just five cows. The farm has grown, now encompassing 544 acres and boasting 100 heads of Jerseys, Holsteins and other kinds of dairy cows. They also have a big pumpkin and squash patch and sell the brightly-colored vegetables in the fall at their roadside farm stand. Jill Bates, 57, and her 59-year-old husband work the farm by themselves, milking the cows twice a day and selling the milk to Organic Valley, the farmer-owned organic dairy cooperative.

But as Randall lay sprawled on the ground that day, in pain, bleeding and thinking he might die, the farm seemed inconsequential. When they made it to the emergency room at the Central Maine Medical Center in Lewiston, they learned that Randall had suffered a concussion and small brain hemorrhage as well as a the multiple facial fractures. He wasn’t dying, but his recovery would be counted in weeks and months, not days, the doctors said.

Nevertheless, the work of the farm had to go on. The cows needed to be fed and milked, the last cutting of hay had to be gotten in, the three acres of pumpkins and squash needed to be harvested and sold. It was too much to think about when Randall was still in the trauma unit, but Jill started to contact friends to let them know what had happened. One of the people she got in touch with was Rick Kersbergen, a University of Maine Cooperative Extension professor of sustainable dairy and forage systems. And Kersbergen had an idea he thought could help.

“She was stressed to the max,” he said of Jill. “It’s just the two of them up there, and those cows have to be milked twice a day.”

Kersbergen also is the education coordinator for the Dairy Grazing Apprenticeship program at Wolfe’s Neck Center for Agriculture and the Environment (until very recently Wolfe’s Neck Farm) in Freeport. He knew there were five apprentices from around the country currently working on the two-year training program there, and thought that one of them would be more than willing to go to New Vineyard and lend a hand.

“These apprentices are already passionate about the dairy industry,” Sarah Littlefield, the dairy director at Wolfe’s Neck, said. “For them to step off this farm and help others was a natural fit.”

“This whole apprentice model just fit the situation perfectly,” Kersbergen said. “To be able to send somebody who was trained. It alleviated a lot of worries on her part.”

So, as Randall began to recuperate, letting his brain heal by staying still and quiet, without the distractions of television, computer or books, dairy apprentice Josh Harlan headed to the farm. Harlan, of Mexico, Missouri, is 23 and has been at Wolfe’s Neck for about a year and a half. He got to Springside Farm just three days after the accident.

“The first week I was there, Randall was basically laid up in a chair,” Harlan said. “He’d wake up a little bit and try to give me some directions.”

But the dairy apprentice had a pretty good idea of what to do, jumping in to do the milking and the haying, even fixing some of the machinery on the mower.

“He was super,” Jill Bates said. “He was able to milk with me, so it took the stress off me. He lived here with us. Bless his heart, he was here during the worst of it.”

After 10 days, though, Harlan had to leave the farm to go on a scheduled trip. So Wolfe’s Neck sent a second apprentice, Haden Gooch, a 26-year-old from central Virginia.

“It was a really amazing experience to be at a small family farm like that,” he said. “I really loved it. They shared a lot of practical wisdom, and seeing how they’ve made it work for themselves through the years, that was pretty amazing.”

After Haden left, Josh returned to help out some more. Altogether, the two apprentices spent nearly a month at Springside Farm.

“I got to hand it to those two guys that came,” Randall, who is continuing to recover, said this week. “They were complete strangers. They came and they fit right in. They just really did a great job. It was comforting to have them step in and do what they did for us, so I didn’t have to worry about it.”

Harlan and Gooch weren’t the only people who came to help, of course. The Bates’s tight-knit community of family, church and farm friends drew close around them to provide everything from meals to pumpkin picking in the 90-degree September heatwave to hay baling. Randall’s 80-year-old father drove over from Hermon to help get the wood in for the winter. Everybody pitched in to do the work that needed to get done, and the Bateses, who are usually not on the receiving end of help, appreciated it.

“The farm people, they know that. They just do it,” Jill Bates said.

“We’re really grateful and humbled by the whole experience,” her husband said.

And something funny happened while the daily farm work was getting done: strangers became friends. That’s how it was with Randall and Jill Bates and their two-man crew of dairy apprentices, at least.

“I felt like they were new members of the family,” Jill said.

The Bateses invited the duo to come back to the farm anytime, and extended an invitation to spend Thanksgiving with the family. The apprentices said they would like to make it.

“I absolutely will be going back there,” Gooch said.