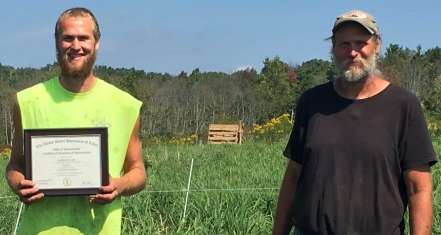 Three years ago, Joseph Moyer had recently graduated from high school and was living on the dairy farm where he grew up in Bradford County, Pennsylvania. Though his two brothers had worked on the farm, Joseph was the youngest and had never helped much with the cows. But at that point, Joseph’s brothers had both left the farm and his father, Brian, needed help.

Dissatisfied with his carpentry job, Joseph began considering a career in dairy—despite the fact that he knew little about milking, grazing, tractors, and most everything else that was routine work for his father. So when Joseph and Brian learned about Dairy Grazing Apprenticeship, they decided it could be a win-win: Joseph would be formally trained to manage a dairy, while Brian would receive a structured curriculum for passing on his knowledge to his son and at the same time gain a committed employee.

Three years, 4,000 hours of on-the-job training, 300 hours of related instruction, and a half dozen online classes later, Joseph became the first Pennsylvania graduate of the nationally registered apprenticeship program, which PASA administers in Pennsylvania and the surrounding region. Joseph joins a small but growing cohort of young and beginning farmers across the country training to manage or start their own farm operation through state- and federally registered apprenticeships.

Joseph joins a small but growing cohort of young and beginning farmers across the country training to manage or start their own farm operation through state and federally registered apprenticeships.

Dairy Grazing Apprenticeship was founded in 2011 by farmers in Wisconsin seeking to curb a national crisis of farmland loss and respond to an increasingly urgent need for training new farmers as a generation of established farmers near retirement, many without identified successors. Through Dairy Grazing Apprenticeship and the educational and networking opportunities it provided, Joseph and Brian were not only able to support one another’s respective training and labor needs, they were able to continuously hone the farm’s management systems to more effectively benefit both the health of their cows and the health of their soil.

This included experimenting with no-till seeding techniques in compacted areas, as well as expanding grazing paddocks into overgrown and even forested areas. Between Brian’s decades of experience as a grazier, and Joseph’s fresh eyes on old ground, their dairy farm today is grazing more productive land than ever before, with a view toward creating more silvopasture opportunities for the cows, as well as more diversified pastured livestock, in general—Joseph built a chicken tractor last winter.

The path forward for Joseph within dairy might be in Bradford County, as he hopes, but the journey dairy grazier certification Joseph has earned can also provide new opportunities. The standard is becoming increasingly recognized by other farms and the dairy industry in the same way a degree might be, ensuring a level of proficiency from hayfield to barn, and paddock to budget. In short, it recognizes the farmer as a professional with earned skills and knowledge, learned both in the field and in the classroom.

Today, Joseph and Brian are actively strategizing how to stay viable and growing, even in the midst of a dairy economy in turmoil. Whatever the path, Joseph is committed. “This is what I want to do,” he states simply. “I don’t know if it would have happened without Dairy Grazing Apprenticeship and PASA.”

Joseph isn’t alone in his commitment to dairy. His wife, Catherine, was new to dairy when the two began dating a few years ago. Soon after, though, she became a regular in the Moyer’s tie-stall barn, eventually becoming a grazing dairy intern at a neighboring farm as part of a partnership between PASA and the Center for Dairy Excellence.

Recently, as her husband was completing his apprenticeship, Catherine officially became her father-in-law’s second apprentice as part of the Dairy Grazing Apprenticeship program. When asked about her decision to join her husband in the industry, Catherine replies, “I love cows, I love grazing cows. It’s not necessarily an easy living, but it’s a good one, and I feel like it’s where God is calling me to be.”