Matthew Keesling, recently retired from the U.S. Army, is doing an Apprenticeship on Bures Organic Dairy Farm in Deerbrook, WI. 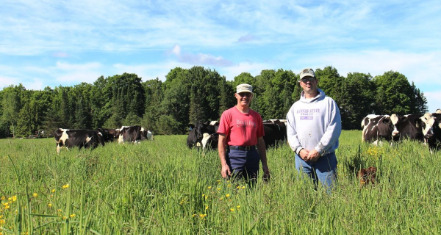 DEERBROOK, Wis. – Owning a dairy farm and keeping it a family farm … that’s what Matthew Keesling says he hopes to do.

Serving as an Apprentice to Master Grazier Andy Bures of Bures Organic Dairy Farm near Deerbrook, Keesling is learning the path to that goal. The two men participate in the Dairy Grazing Apprenticeship, an accredited national program registered under the U.S. Department of Labor-Employment and Training Administration.

Keesling began his Apprenticeship with Bures in June. In the next two years he must complete 3,712 hours of employment and mentorship under Bures’ direction. The Apprenticeship also calls for completing 288 hours of related instruction. The men use the Dairy Grazing Apprenticeship’s “Training Guidelines Handbook,” which addresses all aspects of dairy grazing – from production to business practices.

“The material helps you to understand and make decisions, but it must be put into context on the farm for it to really sink in,” Keesling said.

That’s why the hands-on job at the Bures farm is important, he said.

Bures said, “We’ve been discussing subjects from the handbook while we’re milking and putting up feed for the winter. My job is to help Matt become comfortable about managing a farm for himself. His goal is to learn as much as he can.”

Bures has been farming since 1999, after attending college and graduate school, and serving in the U.S. Army. He grew up on the family farm that he eventually purchased from his father, Robert Bures. He currently has about 80 head of cattle, split about 50-50 between cows and young stock. They are comprised mostly of Holstein genetics with some Jersey genetics introduced.

About 40 acres of the 150-acre farm is in permanent pasture. The rest is grazed as needed, primarily during the second half of the summer. The farm had always been grazed. But when Andy Bures took over the operation, he introduced an intensive rotational-grazing system where cows are moved every day in small portable paddocks. That gives grasses and legumes time to recover before they’re grazed again.

“We have four 10-acre paddocks that are further divided into 28 paddocks,” Bures said.

The grazing mix is primarily composed of bluegrass, white clover and timothy, with some red clover. Bures also feeds grain as well as haylage and corn silage in the winter months.

Keesling said he has been surprised by the amount of feed an acre of land can produce.

“We’ve filled silos with haylage and oats as well as chopped hay and straw for bedding,” he said. “The only feed purchased is corn because we’re too far north for the growing season.”

Keesling didn’t grow up on a farm, but did work on crop and hog farms as a teenager in his hometown of Denison, Iowa. He later earned a bachelor’s degree from Kansas State University and then a master's degree in public administration from Webster University.

He served in the U.S. Army for 24 years and attained the rank of major. His last duty-assignment was in the Afghanistan-Pakistan Hands – AfPak – program, in which service members specialize in the language, culture and challenges of both countries. He worked in the program at the U.S. Central Command in Tampa, Florida, and in Afghanistan.

“I’ve also served three tours in Iraq and two in Afghanistan,” he said.

Before retiring from the army in 2017, Keesling decided he wanted to work from home and always have something to do. So he chose to pursue dairy farming.

“I enjoy the animal-husbandry aspect of dairy and raising a herd to be healthy and productive as naturally as possible,” he said. “As I looked at ways to transition to dairy farming, I realized I didn’t have the educational background or experience to gain financing through the U.S. Department of Agriculture’s Beginning Farmers and Ranchers Program. I began looking for courses I could take online while still on active duty, but didn’t see myself learning how to farm solely from books and webinars. I found the Dairy Grazing Apprenticeship online and posted my profile. I fielded several calls from master grazers and decided this was the path to take.”

Keesling acknowledges the challenges of farming. One of his biggest challenges is staying focused on the big picture, he said.

“It‘s easy to take one piece of information and go down a rabbit hole,” he said. “I need to keep it all in perspective and know the larger aspect will keep me sane.”

Bures relates to that.

“It’s important to balance your life so that you don’t become so absorbed in work that it becomes all you know,” Bures said. “You need vacations, other interests and time with family.”

Bures has three adult children, and Keesling has five children, four of whom are adults. His youngest child – a daughter – is a teenager.

Because Bures’ children don’t work on the farm, he said he appreciates the help of his apprentice. But he also wants to help Keesling take the next steps to establish a viable family farm.

“I hope to own a dairy and bring my children into the business,” Keesling said. “I want to keep it small, but diverse so everyone is employed and that we remain a family farm.”

Lynn Grooms writes about the diversity of agriculture, including the industry’s newest ideas, research and technologies as a staff reporter for Agri-View based in Wisconsin. Email lgrooms@madison.com to contact her.