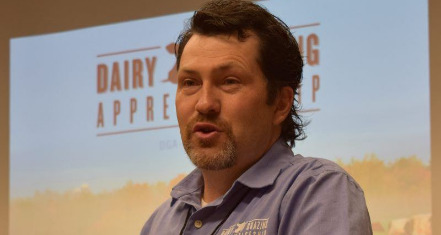 They’re made through hours of moving gates, dipping teats and checking pregnancies. It helps if they know something about soil, machinery and finances.

A national apprenticeship program aims to foster that development by providing a formal route into the dairy industry.

“It’s very difficult to create a full-blown farmer, and that’s what we’re looking for,” said Joe Tomandl, a Wisconsin dairy farmer and executive director of the Dairy Grazing Apprenticeship program.

Tomandl spoke at the Farming for the Future Conference on Feb. 3 at The Penn Stater.

Apprentices spend most of those hours getting their hands dirty — “everything from ear tagging to feed budgeting,” Tomandl said — while the rest of the time is spent on classroom training.

The apprentices learn from a master grazier, a farmer who has at least five years of experience with managed grazing or certified organic dairying.

On-the-ground experience is irreplaceable in creating a farmer, and there’s no better teacher than someone who is already doing the job, Tomandl said.

The masters must be committed to training an apprentice, not looking for a way to hire a milker or tractor driver.

Being a master farmer requires a commitment, but “it really isn’t a ton of extra time,” Tomandl said.

In return, the farmer gets a well-trained employee who can run the farm competently when the farmer takes a vacation or wants to retire from the business, he said.

Tomandl and other Wisconsin farmers started developing the apprenticeship program around 2009 with help from their state’s Department of Workforce Development.

The farmers spent 10 months developing a curriculum trying to emulate the success of established apprenticeships for plumbers, electricians and other tradesmen.

The apprenticeship is registered with the U.S. Department of Labor and run by the industry nonprofit Dairy Grazing Apprenticeship, which helps the program take advantage of grants and lends credibility to the program.

“Now this thing can be taken and used by any farmer anywhere,” Tomandl said.

Federally registered apprentices must be paid a set wage that increases with the worker’s competence, he said.

The classroom component is taught online through an accredited technical college in Wisconsin.

The balance of the off-farm training can include facilitated pasture walks, Extension programs and professional development workshops.

These events help loop the apprentice into the local dairy industry, Tomandl said.

Apprentices must be at least 18 years old and have a high school diploma or equivalent.

The program administrators are trying to see if exceptions to the education requirements can be made for Plain farmers, who may stop formal schooling before high school, Tomandl said.

Apprentices need not be right out of school, though. One recent applicant was a 50-year-old looking for a second career, he said.

Veterans can receive GI Bill benefits during the apprenticeship period because the program is federally registered and taught by an accredited institution.

Seeking structured training, some farm families have even brought their children through the program.

Sometimes, it is easier to talk about a subject because the program, not Dad, says you have to do it, Tomandl said.

For Tomandl, a former ag teacher, one goal of the apprenticeship program is to simplify the path he and his wife took to buy their first farm.

He worked on a neighbor’s farm in the 1980s, but “I couldn’t afford that farm when it came down to it,” he said.

Tomandl instead bought an 80-acre farm in 1998 and focused on grazing. When he had added enough cows, he bought another farm and started grazing there too.

He figures he could have kept scaling up as a confinement operation on his home farm, ending his career with 1,500 cows and a $10 million operation that would be hard to sell if his children did not want to take over.

Several smaller farms would be easier to sell and better suited to a grazing system, he said.

Tomandl has now taken two apprentices through the program on his farm.

Audrey Gay Rodgers, who runs Hameau Farm in Belleville, said farm transfer and the ability to learn from the program herself motivated her to become a master grazier.

Rodgers already operates a teaching farm with a summer program for girls 8-14. Apprentices would be “a natural extension” of that mission, she said.

Rodgers is interviewing candidates and may have an apprentice or two starting in early summer.

Nationwide, about 100 master farmers and 160 candidates have been approved. Thirty-five master-apprentice pairs are active, Tomandl said.

Participants so far are clustered in the Midwest and Northeast — places where the program has built ties with universities, he said.

Aaron de Long, an education coordinator for the apprentice program and a program manager for the Pennsylvania Association for Sustainable Agriculture, oversees the training of three apprentices in Pennsylvania and New Jersey.

In most apprenticeship programs, the master tradesman will just take the name on the top of the list of available candidates.

Dairy farming is a more personal situation, with long hours spent around the farmer’s home, so master graziers often do some interviewing and bring the candidate to the farm before taking the person on as an apprentice.

“We’re not going to get in the middle of hiring,” Tomandl said.

Dairy Grazing is thought to be the only formal ag apprenticeship in the United States. “This could be a template for livestock, for commodity organic grains, for produce,” Tomandl said.

For a video recap of the Farming for the Future Conference, visit bit.ly/PhilPASA .