Drew and Ashley Votis now have about 50 dairy cows, after earning 14 head during an Apprenticeship with Jim and Tammy Schreiner in Athens, WI. 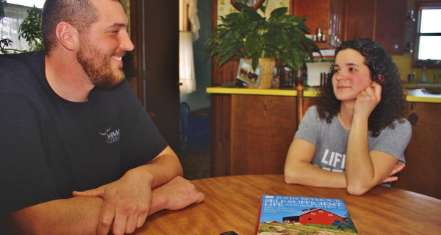 For 26 years Altfrid Krusenbaum operated Krusen Grass Farms, a 470-acre, 140-cow grazing-based dairy farm near Elkhorn, Wisconsin. But he now works for Dairy Grazing Apprenticeship (DGA) as an on-farm education coordinator. That’s how he came to work with Drew and Ashley Votis, dairy farmers from Coleman.

Drew Votis is now a journey dairy grazier; he completed his DGA Apprenticeship in 2013. He and his wife own 20 acres of land and a dairy farm where they milk about 50 cows in a comfort stall barn.

“I’m impressed with how Drew and Ashley make a small dairy work,” Krusenbaum said. “I organized a pasture walk on his farm shortly before he brought the cattle there. We helped him lay out his paddocks. His grazing management is impressive and he’s getting a lot of milk for a grazier.”

The Votis farm is on what was once Ashley Votis’ grandfather’s farm.

“He sold his cows when I was 4 years old, but I always loved the farm,” she said.

As Drew Votis entered his final year of college he began to realize what he really wanted was to gain more experience in grass-based dairying. He soon discovered the Dairy Grazing Apprenticeship program. The fully accredited two-year national program gives inexperienced beginners the chance to learn while working as paid employees for master graziers with established grass-based dairy farms.

“We considered a few farms,” he said. “We really hit it off right away with Jim and Tammy Schreiner of Athens, Wisconsin. I graduated from college in December 2011 and started my apprenticeship with them in January 2012. We had an arrangement where I bought every third heifer that was born.”

That resulted in the Votises owning 14 head at the end of two years. They still are in contact with the Schreiners.

“About once a month we check in with each other to see how things are going,” Ashley Votis said.

After completion of his apprenticeship Drew Votis worked for Jim Schreiner’s brother Tom Schreiner for nine months. That led to an opportunity for Votis to rent a dairy facility in Athens and to milk his own herd of cows beginning in September 2014. He added 18 cows from a small local herd to his 14 as well as a modest line of equipment.

“That was when milk prices were really good,” Votis said with a smile. “By January 2015 milk prices had pretty much tanked.”

Ashley Votis said, “We learned really quick how to be efficient.”

The couple agreed they are improving their efficiency every year.

In 2017 the Votises were committed to improving the dairy barn on her grandfather’s farm so they could go on their own. Drew Votis made the drive from Athens to Coleman whenever possible to make the barn usable again for a herd of cows. New comfort stalls and a tiled manger are just part of the results of his work. The couple moved their herd the farm in spring 2018 after purchasing the buildings and home along with 20 acres of land once owned by her grandfather, who has since died. The Votises rent the farm’s remaining 120 acres from her aunts.

The Votises are currently hauling manure daily during the non-grazing season when the barn is in full use. Recently the temperature was in the single digits.

“One of the biggest issues when it’s really cold is thoroughly cleaning the apron on the spreader floor after you haul,” he said.

The couple plans to add a manure pit to their barn this summer.

“It’s important to spread manure on living plants instead of snow,” he said. “A manure pit will make that possible.”

Drew Votis is a big fan of corn silage.

“I feed a low level when the cows are on pasture, and as much as I can during the winter,” he said.

His herd average is at 21,000 pounds of milk with his predominantly Holstein herd, based on his sampler testing. The test averages 3.6 percent butterfat and 3 percent protein; it decreases slightly in the grazing season.

Votis isn’t considering organic production, he said. He loves grazing his cattle and no-tillage practices but it’s not on his concern list to convert to certified-organic production. He was motivated by reading Joel Salatin of Polyface Farm near Swoope, Virginia. And he cited John Seymour as a big influence, who wrote “Self Sufficient Farming.”

“What I had envisioned for my farm was actually much different than what I have today,” Votis said.

Originally he considered a diverse grass-fed operation that would self-market everything from eggs to grass-fed meats. But he decided dairying was a more secure way to make a living and raise a family. The couple has three children – Amelia, 4, Abigael, 3, and Richard, 2. 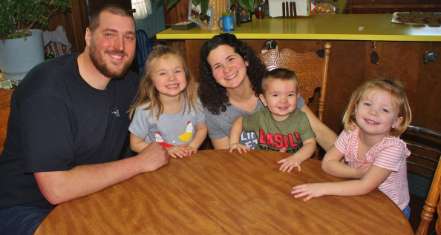 “This farm is our business and our hobby,” he said. “It’s what we do for fun. We’re very content with our life right now.”

For the Votises, farming on ancestral property and raising their children is exactly what they want to be doing.