An Apprentice: His Master, Their Cows

John Richmond and Chuck Flodquist were matched up by the Dairy Grazing Apprenticeship program in late 2014. Flodquist has been training Richmond as his successor on his 200-cow dairy near Colfax, Wisconsin. 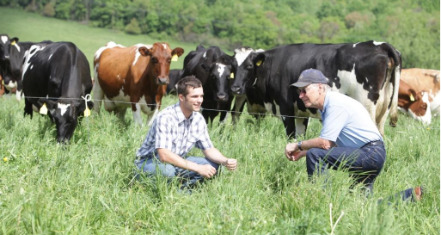 COLFAX, Wis. - After submitting an application to enter the Dairy Grazing Apprenticeship (DGA) program John Richmond waited to hear five words: “Do you want to farm?”

It had only been about two weeks prior that Richmond applied for the DGA, a program started by dairy producers as the first farming apprenticeship program in the United States that seeks to match dairy graziers exiting the dairy industry with aspiring dairy farmers who want to learn more about using managed grazing for milk production. For the past year, Richmond has been working as an apprentice under master grazier, Chuck Flodquist, owner of Hill Creek Farm near Colfax, Wis.

Richmond, who grew up in Granton, Wis., had first encountered DGA when he approached their booth at the University of Wisconsin-River Falls career fair in the fall of 2013.

“I didn't grow up on a farm, but many of my relatives farmed and I helped them out quite a bit,” Richmond said.

Once he started college, he carried his love for farming with him. When he wasn't in the classroom or participating in extracurricular activities, he was milking cows.

“During college, I wanted to gain as much experience with as many types of dairy farms as possible,” he said.

After speaking with DGA's executive director, Joe Tomandl, and learning that dairy farmers wanting to retire were looking for new college graduates to succeed them, his interest was definitely piqued. A year later, he made a beeline at the career fair for Tomandl, who encouraged him to apply.

One or two weeks after applying, he received a phone call from Flodquist, who moved to Wisconsin in 2001 after selling his dairy farm in Minnesota, was looking for someone to transition into ownership of his dairy farm.

When Richmond picked up the phone, Flodquist asked, “Do you want to farm?”

Richmond enthusiastically jumped at the opportunity, and agreed to meet with Flodquist at his farm later that fall. Upon his arrival, he hopped in Flodquist's truck, and they discussed ideas and goals as they drove around the farm.

“He must have liked what I said because he asked me to come back,” Richmond said with a laugh.

That winter, Richmond returned to the farm to sit down with Flodquist and his wife, Karen.

“We had lunch, and sat around the kitchen table to talk about goals and ideas we had for the farm,” Richmond said. “All three of us were smiling at the things being said and discussed. We decided we would do it.”

Richmond graduated from college on May 16, 2015, and arrived at the farm two days later.

“I walked across the stage [on Friday] and started work on Monday,” he said.

The farm, which consists of 390 acres owned and an additional 60 rented acres, is mostly pasture other than 40 to 60 acres for corn silage. Cows are calved in on a seasonal basis; spring calving stretches from April to the end of May, while fall calving begins in mid-August and ends in October.

“During slow times, we're milking 100 cows, but during calving season when we've got a lot of fresh cows we're running close to 200 cows through the parlor,” Richmond said.

On average, the cows produce about 50 pounds of milk per day and average around 15,000 pounds per lactation. Except for the seven pounds of grain they get per day when they enter the swing-15 parlor, the cows at Hill Creek Farm are fed from pasture.

“We feed grain based on our milk urea nitrogen (MUN) numbers,” Richmond said.

What the cows can't keep up with in the paddocks is round baled for winter feed.

“We're not so much dairy farmers as we are forage harvesters,” Flodquist said.

The herd doesn't stay in one place for very long; in fact, they get moved from paddock to paddock between milkings to prevent overgrazing. The pastures consist of a variety of plants including alfalfa, timothy, clover, meadow fescue, orchardgrass and brome.

“It's good to have a nice mix because every cow is different, and she may need different nutrients,” Richmond said. “Cows know what their bodies' need, and they'll go after that particular plant based on their cravings. It's amazing what a cow can do.”

When Flodquist began dairying, he milked Holsteins and Jerseys. However, after making the switch to grazing, he began experimenting with dual-purpose crossbreeding. While the herd is mostly Holstein today, the Fleckvieh and Normande crossbred cows stand out amongst their black-and-white counterparts.

“We've got a little bit of everything,” Richmond said, regarding the different bloodlines flowing through the cattle.

The breeding behind the cows allows for them to carry more condition on their frames, as they are housed outside in the winter as well.

“They're almost fat,” Richmond said. “Last winter, it was fairly mild, so they almost didn't need any grain to get them through.”

Bull calves are kept to breed heifers and do clean-up breeding for cows that haven't settled to A.I. To prevent inbreeding, care is taken to ensure that bull calves come from a straw, as Richmond put it.

Richmond, who is now halfway through his two-year apprenticeship, has enabled Flodquist to become semi-retired. Richmond, Flodquist and another employee are on the farm much of the time, with an occasional relief milker picking up a shift on weekends. While Flodquist still has control over the pocketbook, he lets Richmond make more and more managerial decisions as time goes on.

Next year, when Richmond completes his apprenticeship, he will take out a five-year loan to buy the cows from Flodquist. Before beginning to buy land and machinery, Richmond has to have most of the cow loan paid off so he doesn't take on a large debt load.

“There's a saying out there that goes, 'He who grabs too much loses grip,'” Richmond said. “I don't like being in debt one bit. I want to get it all paid off.”

For now, though, the young apprentice and his master are enjoying working together to make sure Hill Creek Farm stays the way it is now and continues to improve in the generations to come.

“I'm happy, Chuck is happy and the cows are happy,” Richmond said as he watched the cows amble through the lush hillsides of his future farm. “It's a good life here.”