A New Way to Measure Pasture

PaddockTrac is an innovative new technology that has potential to improve forage management. Find out more in an article originally published in Graze Magazine. 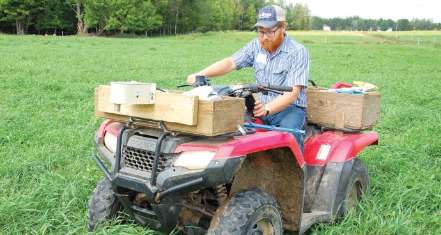 When it comes to assessing pasture availability and growth rates, U.S. graziers tend to use their eyes and experience. Technologies ranging from simple rising plate meters to high-tech satellite monitoring may get some attention, but the reality of the matter is that most graziers don’t use such tools.

Dr. Stacey Hamilton understands. Hamilton, a University of Missouri Extension dairy specialist who has conducted on-farm research and worked directly with grass farmers for more than two decades, often hears that busy work schedules get in the way of spending time walking pastures with plate meters.

Hamilton notes that at least under U.S. conditions, satellites and other automated methods have some problems. And he agrees that many veteran graziers do a good job of managing their swards without the information such tools can provide.

Yet Hamilton believes that even topnotch pasture managers are leaving dollars on the table by relying solely upon eyeballs and experience. He says inconsistent management caused by small miscalculations in growth rates and pasture covers can prevent good graziers from maximizing production and consumption of high-quality pasture, leading to higher feed costs.

Dubbed PaddockTrac, the sensor collects up to 50 forage height readings per second as the ATV travels through the paddocks. The Bluetooth-enabled sensor links to a smartphone app. Data automatically upload to the University of Missouri’s grazing wedge site ( grazingwedge.missouri.edu ), which ranks individual paddocks based on forage cover while also indicating growth rates.

“This information helps give you confidence. This reduces the ‘what if?’ part of management,” Hamilton explains. “You know what’s there, so you can make a decision and be proactive rather than reactive.”

A faster way to measure

He says PaddockTrac carries some advantages compared to other means of gauging paddocks.

For one thing, it’s a lot faster than walking paddocks: the Missouri developers say that accurate readings can be achieved while traveling eight to twelve miles per hour, although field conditions may dictate lower speeds.

“When I use it, I zoom over and under fences, and I’m doing the job in probably less than half the time it would take to do it walking with a plate meter,” Hamilton says.

He adds that the speed and convenience usually lead to more area being covered, which produces more comprehensive and consistent forage readings compared to doing the job on foot.

PaddockTrac users do not have to be concerned with keeping track of individual paddocks and manually uploading data points, as the system will do that automatically once the manager has produced a map coordinated with a phone’s GPS. Graziers can log into their Missouri grazing wedge account to see what their latest readings are showing for pasture dry matter amounts in individual paddocks.

Hamilton says PaddockTrac avoids weather-related and multi-species sward issues that can cause problems for satellite-based systems. Also, while computer programs can forecast paddock growth rates based on soils, climate and weather conditions, he believes they have limitations.

Explains Hamilton, “Those programs are good, but eyes are better. We didn’t want guys to get away from interacting with their farm.”

But Hamilton says the system will not be 100% accurate. Instead it should be used by working graziers as a way to produce consistent estimates providing useful management information.

Key to the entire effort is producing an equation that does a fairly accurate job of converting forage height to forage dry matter. So far, much of that work has centered upon pastures with relatively few species beyond perennial ryegrass, with many of those paddocks under irrigation.

Hamilton acknowledges the equations will have to be different for those managing taller, multi-species pastures under less predictable conditions.

He says this can be accomplished in a variety of ways, with cutting and drying at different growth stages (early, middle and late) being one good option. Cuttings can be from the ground up or a height representing a normal post-graze residual.

From there, an equation or equations can be developed to approximate dry matter. “This isn’t research,” Hamilton emphasizes. “But it can get you to a place where you have more information for making decisions.”

How to make this information workable? Hamilton cites one example in which the University of Missouri developed equations for beef herds grazing tall fescue representing early, midsummer and fall growth characteristics.

He says early work indicates PaddockTrac can do a very good job of accurately gauging multi-species paddocks, although more research is needed to determine how the results might compare with monoculture swards.

The reality of the matter, Hamilton says, is that PaddockTrac’s numbers are likely to be off at least a little.

“The ultimate tool in this is the cow,” he emphasizes. “If they’re leaving more or less (pasture) than indicated by the machine, you can always adjust your decisions. This gets you in the ballpark, and then you can let the cows tell you what to do.”

PaddockTrac is not available for purchase, although Hamilton says that may change in the foreseeable future. He says costs for parts and labor add up to between $1,200 and $1,500.

And while the Missouri grazing wedge is currently the only option for managing PaddockTrac’s information, down the road it’s possible that linkage to private data services might be available, which would likely give users more options for adjusting management based on the numbers.