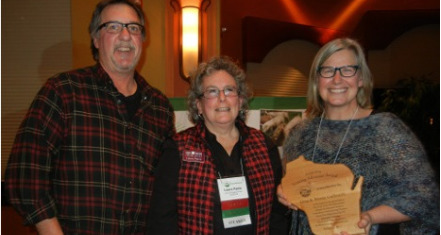 Wisconsin Dells - The goal all along, for Greg and Wendy Galbraith of Marathon County, has been to keep things simple. Perhaps it is that mentality that led to their surprise after being honored with the 2017 Jerold Berg Grazing Advocate award at the annual GrassWorks Grazing Conference in Wisconsin Dells.

In fact, the couple has dedicated countless hours toward helping farmers adopt the practice of managed grazing since making the switch themselves in the early 1990’s.

The Galbraith’s have not always farmed the way they do now. When asked why they turned to grazing, Greg explained that it was obvious that a drastic change was necessary to survive financially. In doing so, the Galbraith’s realized all of the other benefits that come along with managed grazing; including less stress.

At the time of their transition, there were no grazing planners to speak of who could help them, so they hired a consultant from New Zealand. Over time, they have developed a very simple and successful grazing based dairy model. They have demonstrated that simplification can help to balance stress, quality of life, and profitability in farming.

Paul Daigle, director of the Marathon County Conservation, Planning, and Zoning Department, nominated Greg and Wendy for the Grazing Advocate Award, which has been appropriately named after the late Jerold Berg who was a longtime GrassWorks board member and champion of grass-based agriculture.

Daigle noted that the Galbraith’s hosted some of the first ever pasture walks in Marathon County, and continue to do so today. They have also spoken at numerous conferences and hosted training sessions in support of managed grazing. They feel so strongly about the benefits of managed grazing that they are dedicated to sharing their successes and failures with other farmers, agency staff, and academia.

It was described that Greg and Wendy were nominated for this award as a couple because they are inseperable. In today’s current agricultural climate where stress is prominent, perhaps that is the greatest testament to the practices that have allowed their livelihood to be successful.