Nate Peplinski, 33, has been dairying near Stevens Point, Wisconsin, for nearly as long as he can remember. Born the youngest of seven children, by the age of 6 he was feeding calves for his dairy-farmer father. By the time he was 14, Nate was doing much of the milking.

The work of his youth instilled a love of dairying that stuck with him beyond his college years. After earning an animal science degree from the University of Wisconsin-Platteville, he went to work for a dairy farmer near Mount Horeb, Wisconsin. “I got dairying in my blood, and I couldn’t get away from it,” he says.

That’s why he jumped at a chance to buy his father’s dairy cows and take over his parents’ conventional dairy when the opportunity seemed right in 2006. But he bought the herd of 100 cows on the high end of the market, when milk prices were a strong $17 a hundredweight. Four years later the price of milk plunged to $9 a hundredweight, and the value of dairy cows dropped 70 percent.

“I had no equity to help support the debt, and I had to sell out,” he says.

There followed a two-year period of working at a job in town. It was a time, of course, filled with reflection. Considering the financial difficulties he’d endured and temptations for discouragement, he might have given up his dream and put dairying out of his mind.

But he hung on, and when opportunity knocked again, he opened the door. Today, after graduating from the Dairy Grazing Apprenticeship (DGA) program, he works fulltime for DGA Master Dairy Grazier Paul Onan, whose grass-based dairy lies just three miles from Nate’s home place, where he continues to live. His earlier experience with managing a conventional dairy gives him keen insights into the benefits of grass-based dairying.

Paul, too, has his own story of perseverance to tell. A longtime grass-based dairy producer who helped found DGA, Paul, 65, has clung tenaciously to his vision of helping a Dairy Grazing Apprentice like Nate build a dairying life on his farm and with the herd he built. Nate is his third Apprentice candidate, the only one to graduate from DGA and show continuing promise as a successor to Paul’s farm.

Studied his strengths. After operating as a conventional dairy producer for four years and then liquidating the herd he’d acquired, Nate worked for two years at a job in town. During this time, he thought about his options for the future. What career path should he follow? What type of work best suited him?

Insights from business consultant and author Jim Collins guided Nate’s thinking about career choices or possible business starts. He wanted to pursue work he was good at, passionate about and that provided a positive financial flow.

“Then, as I was job hunting, there came a point when I realized I had 20 years of experience in one industry – dairying,” he says. “I was just in my late 20s. To have that much experience at that young of an age is practically unheard of. And, not only that, but I really enjoyed dairying, and I knew I had an aptitude for it.”

Enrolled in DGA. Not long after realizing he wanted to get back into dairying, Nate learned that neighboring grass-based dairy farmer Paul Onan was looking for a full-time employee. When he applied, Paul hired him on the spot.

Learning from Paul about the opportunities available through DGA, Nate enrolled in the two-year program, graduating in April 2016. “The program offered me excellent networking opportunities, and the classes I took were useful,” says Nate. “Learning about managing dairy cows on grass has been particularly helpful. When I was managing my own herd, grazing wasn’t on my radar because it wasn’t part of my operating system.”

Learned differences between systems. Working within Paul’s system while enjoying the relative financial freedom of a paid employee, Nate was able to relax emotionally and study the differences between the conventional system he had once managed, and Paul’s managed grazing system. Nate had previously managed his cows by conventional methods, milking in a tie-stall barn but housing cows primarily indoors, giving them limited outdoor exposure. The cows’ ration was mixed from mechanically harvested ingredients.

By contrast, Nate saw that cows primarily harvest their own feed in Paul’s system. From early May until December cows graze 120 acres of grass/legume mix. The acreage is fenced with permanent fencing into 15-acre paddocks. Shallow piping carries water to the acreage, and temporary polywire crosswires allocate enough forage to last between each milking.

“We give the cows fresh grass by lifting the polywire with an 8-foot-long section of PVC pipe and letting them walk underneath,” says Paul. “At first, heifers are reluctant to move beneath the wire, but they soon get used to it.”

On rented and owned land, Paul grows alfalfa and corn for both hay and silage. He keeps the alfalfa in production for five or six years and raises corn for a year in order to give the fields a break from the alfalfa. “I buy all of the grain we feed to the cows,” he says.

Paul’s present managed grazing system differs greatly from the conventional practices he used when he first started dairying in the early 1990s. Even at that early point in his career he found his conventional production system an uncomfortable fit. “Back then, I was running 30 to 40 cows in confinement feeding them every day and hauling the manure away,” he says. “One year, I had rented 35 acres of standing hay because I was running short of feed. To get the hay put up, I worked until 1 a.m. one night, and I finished haying that morning feeling frustrated with my system.”

While grazing-based dairying was then more uncommon than it is now, Paul had been reading about producers who were having good success with it. It was a system that made sense to him. “For two years I went to grazing conferences, and I thought about how I was going to do things,” he says. “And then the day came when I finally let the cows out of the barn, and they started grazing – harvesting their own feed. Life got so easy, I added cows to the herd to take up my time!”

Hand in hand with management changes, he altered the genetics of the herd, crossbreeding his Holsteins with Jerseys. “The crossbreds have hybrid vigor, which gives them greater fertility,” says Paul.

Milk production has trended downward only slightly as a result of the switch in genetics and management. Paul’s milk production from cows in confinement was 21,600 pounds per cow per year. Present annual production per cow is 17,000 pounds, with much higher butterfat and protein. The cows’ present ration includes 14 pounds of grain per head per day, 5 pounds of DM corn silage and all the pasture forage they can consume.

“When I was at home, I was a specialist,” he says. “Managing conventionally, I put systems in place that are reproducible. And one can do that very well, and it can be successful – if the economic denominator is positive. But with grass-based production there are a lot more moving parts. The system is more complicated to manage. Depending on weather, for instance, feed quality often changes during the rotation.”

Learning to discern these often subtle changes also brings with it the learning of multiple management reactions. “But while deciding on a course of action, you have to make sure that you don’t get so involved in these day-to-day details that you lose sight of the big picture,” he says.

Saw that cattle could take care of themselves. “You can do a really good job of taking care of cows in a conventional system, but all the exercise a cow gets while grazing is good for her; the cows just do better,” says Nate. “I’ve noticed that Paul’s cows are in so much better shape than those I’ve seen in conventional systems. In a conventional system, if a cow slips on concrete or ice, it’s hard for her to get up. With Paul’s cows, if they slip and fall, they just pop right back up. They’re so much more muscularly fit, and that has to do with exercise and cows harvesting their own feed.”

The outwintering of cattle is another way that Nate has seen that livestock can take care of themselves. “Then you don’t have that enormous capital investment in bricks-and-mortar-type buildings,” he says.

Learned a new economic denominator. Nate’s earlier financial experiences with conventional management meant he particularly close attention to aspects of grazing based dairying that make it a cost effective, economically resilient production system. Not only has he seen an ongoing economic stability in Paul’s operation, but this capacity for stability in managed grazing systems was verified by other dairy graziers participating in the discussion groups that were part of his DGA participation.

“These producers shared their financial numbers, and I found comfort in seeing that dairy producers can change the economic denominator to one that is positive,” he says.

Grazing-based dairying’s lower feed costs and reduced investments in equipment and facilities contribute to a relatively stable financial picture for an operation. “Feed costs are significantly lower in a grass-based system than in a conventional one,” says Nate. “There’s less feed to harvest mechanically, and you don’t have feed-storage losses. If the cattle do waste grass or hay, they trample it into the ground, and it becomes organic matter for the ‘herd’ of organisms in the soil. That just makes the next crop that much better. Feed efficiency with grass-based dairying is tremendous.”

When cows harvest feed and spread manure for themselves for at least six months out of the year, less fuel is consumed, of course, and there’s less wear on machinery along with lowered investment in equipment. Decreased dependence on facilities, too, reduces debt and other overhead costs.

“From Paul and others in the discussion group I learned that grass-based dairying presents modest overhead costs, favorable debt-to-equity ratios and positive liquidity,” says Nate. “You really only have to invest in cows and land, and that can help turn the economic denominator into one that is positive.”

Exploring ways to transition into the operation. As Paul and Nate move forward with their ongoing working relationship, they are beginning to explore the possible ways that Nate might begin building ownership equity in the operation.

“If Nate does in fact begin the process of taking over the farm, we’re looking at a relatively long transition,” says Paul. “He would buy the cows first, probably with a milk-share agreement. We could set up an LLC – a limited liability corporation – as he increases his ownership in cows and machinery. After a five-year period, he’d gain a lot of equity in cows and machinery, and he could start buying land.”

If indeed the two succeed in accomplishing the eventual transition of the farm into Nate’s hands, it will be the fruition of dreams for both: for Nate, to own and manage a dairy; and for Paul, to pass a viable farm into the capable hands of a farmer who values the rhythms of grass-based dairying. 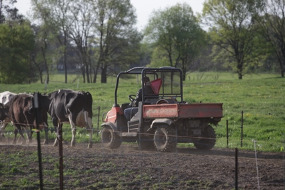 “From Paul and others in the discussion group I learned that grass-based dairying presents modest overhead costs, favorable debt-to-equity ratios and positive liquidity.” - Nate 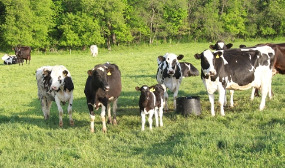 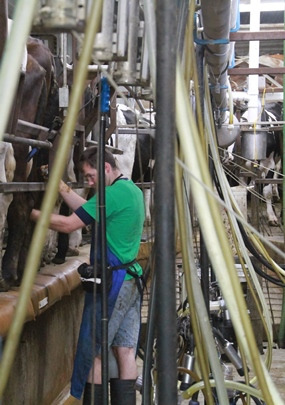