A Mentor's Help Lays Groundwork for Success in Dairying

These advantages were the very stepping stones Nate used to start his own dairy. After working for Hans from 2004 to 2011, Nate, 30, now owns a herd of dairy cattle numbering 200 head. He purchased an 80-acre grass farm near Merrill, Wisconsin, and leases milking facilities and pasture on a neighboring farm.

“There's not a chance a beginning dairy farmer can start up without having equity in cattle,” he says. “If I hadn't had the experience of working with Hans, I wouldn't be in business today.”

For Hans, going the extra mile to provide career opportunities for an apprentice-employee like Nate is well worth the effort. “When I'm able to hire someone who is interested in dairying as a career and not just working for a paycheck, there's the potential to have a high-quality employee,” says Hans. “It's definitely a plus.”

STEPS TO NATE'S START IN DAIRYING

Worked toward his dream. Nate learned to love dairying during his childhood while spending weekends helping his grandparents on their dairy farm. “My brother and I helped milk the cows, and we drove tractors, too,” he says. “Whatever they had going on, that's what we did.”

As a high-school student, Nate worked at other dairy farms. He continued to work for dairy farmers after graduating high school. One farm making a lasting impression on him was a 40-cow dairy where rotational grazing was practiced. He hoped to learn more about managed grazing in the future.

After his freshman year of college, he began working for Hans. He continued at this farm all through his college years, working weekends and summers.

Educated himself. Nate acquired a four-year degree in dairy science from the University of Wisconsin—River Falls. He also completed the Wisconsin School for Beginning Dairy and Livestock Farmers, a two-year program. While working for Hans, he graduated in 2011 from the Dairy Grazing Apprenticeship (DGA), with Hans serving as his mentoring Master Dairy Grazier.

“Networking is a key benefit I found from participating in the DGA,” says Nate. “The conferences and seminars gave an opportunity to meet other apprentices and mentoring farmers. We were able to borrow ideas from each other and learn from each other's mistakes. For anyone who wants to farm, the DGA offers a real-world learning experience. It presents a formalized pathway into dairy farming.”

Created a niche for himself in the operation. After Nate graduated college and began working full time for Hans, he saw an opportunity to express his growing interest in grazing as a production practice that could benefit the operation. At the time, the herd's replacement heifers were raised by a custom developer. But developing the farm's young stock on grass seemed a viable possibility.

Nate's expressed interest in the rotational grazing of dairy cattle combined with the responsible work ethic he'd already demonstrated on the farm suggested to Hans that trying the new practice as a means of developing the farm's heifers had merit. He saw, too, that letting Nate take the managerial lead in this new work for the farm offered his operation potential cost savings while also helping his young employee exercise managerial skills.

“Nate is passionate about grazing and is a tireless worker,” says Hans. “Given that combination of aptitudes, I believed I could pretty much count on him making a grazing system work. I figured I had the best person in place to take on the project, and I just needed to get out of the way and let him do it. As an employer, I want to empower people to do what they want to do. I don't want to micromanage their efforts. In the end, that is what's good for an operation.”

Made the grazing system work. Hans rented a 78-acre farm nearby that had grown row crops. They no-till planted the farm to meadow fescue, red clover and sweet clover. The new planting was ready to graze by midsummer.

Using cost-sharing from the Natural Resources Conservation Service, they fenced and crossfenced the farm. The cost-sharing agreement called for a five-year commitment to grazing.

“We used high-tensile wire to fence the perimeter and for the crossfencing needed to create seven interior paddocks,” says Nate. “We then used polywire and step-in posts to subdivide larger pastures into smaller paddocks. We rotationally grazed 300 to 400 head of 6- to 13-month-old heifers, and I moved them daily.”

They wintered the heifers in sheltered areas of the farm. Hay and corn silage made up the winter ration.

After undergoing a learning curve, Nate found his stride in managing the system. With the freshening of the first group of heifers, multiple benefits of developing replacements on grass became evident.

“Besides that,” he adds, “they had more frame and structure. Once they started freshening, they were bullet proof in the way they calved. They just seemed to squirt the calves out, and they didn’t have mastitis or metabolic problems. Overall, we were able to save money and have a better animal besides.”

Though Nate has since left the dairy to start his own operation, Hans continues the practice of rotationally grazing replacement heifers.

Began building a herd. Recognizing Nate’s desire and potential to successfully manage his own dairy, Hans offered Nate the chance to begin building a herd. The business arrangement they agreed upon allowed Nate to purchase newborn heifers from Hans as he could afford them. The heifers were raised within the operation at no cost to Nate. However, his employment earning was capped at an entry-level wage throughout his tenure with Hans. To further offset input costs to Hans incurred by Nate’s cattle, Nate received no income from sales of milk from his cows.

The herd-building opportunity Hans provided allowed Nate to start a dairy with a sizeable herd. When he left Hans’ operation in May of 2011, Nate owned 86 head of dairy cattle. Of these, 23 head were milking.

Selling heifers to Nate and absorbing the cost of feeding these cattle was possible for Hans because of his ability to produce productive females at a predictable rate. “Our reproductive performance has been very, very good,” he says. “Besides that, we use sexed semen, and so we are able to produce more replacements than we need. I saw that providing a herd-building opportunity was a way to pay Nate during a time when there was no need to expand our own herd.”

Used equity in cattle to finance farm. The cattle purchased from Hans gave Nate the means to start his own operation. Using cattle as equity, he was able to finance the purchase of an 80-acre farm with a home near Merrill. The equity helped him qualify for a low-interest Beginning Farmer and Rancher loan from the USDA Farm Service Agency. He grazes young stock on this farm and hopes to eventually build a milking parlor there.

Nate presently rents dairy facilities and pasture on a nearby farm, where he milks and rotationally grazes 85 cows. He purchases hay, corn silage and some grain to feed to the cattle. To help out with the work, Nate employs a high-school student part time. He also relies on part-time help from his brother, Nick.

In the busy day-to-day management of his operation, Nate makes use of his “support network,” which is made up of professionals including his banker, vet and feed consultant. “I can call any one of them up and describe problems, and ask for their suggestions,” he says.

His daily round of work proceeds more smoothly, too, because of his commitment to ongoing learning. “Education is important,” he says. “Everything we do is important, but we need to continue learning. In fact, the biggest reason I am able to have my own operation is because I spent time working for Hans. He gave me the opportunity to learn, the opportunity to make things happen.” 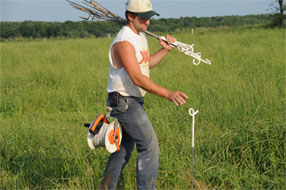 "If I hadn't had the experience of working with Hans, I wouldn't be in business today." - Nate 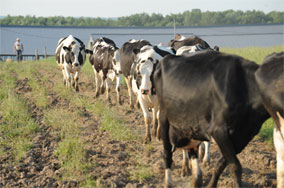 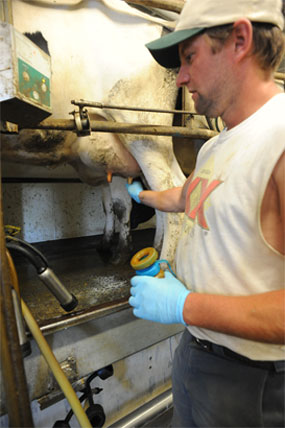