Clem and Malinda Miller grew up on small dairy farms where family members worked together to milk cows and tend fields. After their marriage and the arrival of four children, they looked for a way into dairying that would let them build and share the same dairy-farm lifestyle they themselves had lived.

But they could find no way to start their own farm. On the one hand, the small dairies of their youth no longer seemed to offer profitability. Yet on the other hand, starting up on a larger, conventional style of dairy was simply too expensive – and indeed not the life they had hoped for.

“With all the feed, equipment, and facilities needed to run a confinement-style dairy, I couldn’t see how we could afford to make it all work,” says Clem, who worked for such an operation for three years.

Then came an opportunity to work for Joe and Christy Tomandl on their grass- based dairy near Medford, Wisconsin. Unique circumstances in the Tomandls’ operation had created a “satellite” dairy owned by them and located just three miles from their main dairy farm.

Today Clem, a 2013 graduate of the Dairy Grazing Apprenticeship (DGA), manages the Tomandls’ satellite farm, where he and Malinda live and enjoy the dairy-farm lifestyle they’d earlier hoped they could share with their children.

“Melinda and I do everything together – milking, feeding,” says Clem. “This is what we really wanted to do; it’s our dream job. We don’t rule out having our own dairy one day, but right now we’re happy where we are. Working here, in the Tomandls’ grass-based system, we’ve learned that people can start dairying with a moderate investment. In the long run, the system offers economic viability.”

For the Tomandls, developing Clem’s skills and then placing him as manager of the satellite dairy is a benefit to their overall operation. While their seasoned manager Travis Bergmann, 29, oversees operations at the main farm, their placement of Clem, 30, at the helm of the satellite farm gives the Tomandls opportunity for moderate expansion while preserving flexibility in their lifestyles.

The Tomandls’ development of managerial skills in the young people and establishment of the satellite farm gives the new generation of managers room to grow and prove their skills. The second farm offers, too, a natural way to eventually transition a younger operator into a position of ownership.

STEPS TO THE START OF A SATELLITE FARM

These are the steps the Tomandls took to build a satellite farm and develop skilled managers to oversee their expanded dairy operations:

Purchased a neighboring dairy. In 2010 a neighbor’s dairy farm came up for sale, and the Tomandls purchased it. Buying the second farm located three miles from their main dairy gave them a way to expand their grass-based operation.

“We had already achieved an efficient model of production at our main farm,” says Joe. “We were milking 180 cows and using 320 acres of forages for grazing. But we had been wondering how we could grow. Like any business owner, we wanted our production to be of a size that would permit the next generation to get into the business. Yet expansions in grass-based operations are limited by the distance cows can efficiently travel in one day.”

Because the neighboring dairy came with 200 acres of forages suitable for grazing, it provided an ideal opportunity for herd expansion. The Tomandls purchased 150 cows for the new place and crossfenced its land base into paddocks ranging in size from 6 to 25 acres.

“It’s our intent to eventually create an opportunity for a new farmer to get started on the satellite farm,” says Joe, 42. “When Christy and I are ready to downsize, we can transition out of the business slowly, by selling this second farm first. We won’t have to sell out lock, stock and barrel.”

Besides this, the purchase price of the satellite farm will be more affordable to a start-up dairy producer than the price of a single operation comprising an expanded herd and infrastructure at one location.

“What would our communities look like if instead of one 3,000-cow farm we would have 20 150-cow farms?” Joe asks. “Besides the dairies, independent business owners providing services and good jobs would also spring up.”

Developed skilled personnel. While sustaining a higher number of 150-cow or smaller dairy farms could indeed benefit communities, it’s hard to find young manager-owner candidates with the diverse skills needed to run all aspects of a smaller, grass-based operation.

“That’s where the Dairy Grazing Apprenticeship comes in,” says Joe. “We’ve created a standardized, hands-on way of teaching and training young individuals who can become skilled managers and owners of grass-based dairies. We’re creating a pathway for continuing independent ownership of dairy farms.”

Soon after coming to work for the Tomandls, Clem enrolled in the DGA. The courses he took during the two-year program broadened his skills. “The classes were particularly helpful,” he says. “In the milk quality class, for instance, I learned more about issues like high cell counts and handling antibiotics. The classes did a good job of teaching the background for practices we’re already using.

“In addition, through the seminars and workshops I learned from graziers who had many years of experience,” he says. “I also learned from other Apprentices. Everyone came from a different farm, and we could share the different ways each person did things.”

Adds Joe: “It’s important to network with other people who are doing the same thing as you. We have found that one of the keys to success is surrounding yourself with people of like interests.”

In the daily operation of Tomandl’s dairies, he stays in touch with his two managers, monitoring and discussing management issues as they arise. “One day every two weeks we walk through all the pastures together and make sure we have staggered them in the right sequence,” says Clem. “Every Monday and Friday morning we compare notes and discuss feed inventories and health issues in the cattle. Other than that, he lets me run the operation as I see fit. I’ve got confidence in him, and he’s got confidence in me.”

Developing capable personnel takes time and effort, however. “The person who pays the bills and owns and ultimately runs the business needs to help employees understand the thought processes behind daily decisions,” says Joe. “Take time to show them why you feed what you’re feeding, for instance; why move to certain paddocks, and how you go about deciding how much grass to allocate for a grazing period.

“We’re hoping to create from our employees future farm operators and farm owners,” adds Joe. “Rather than specializing in one area of the operation as they might if they worked at a large dairy, they’re learning to be big-picture people, managing cows, calves, grass and facilities in one package.”

As the Tomandls’ young managers gain expertise and confidence, Joe finds he now has time to spend on endeavors beyond his own operation. As program director of the DGA, he works to further develop and broaden the program, often traveling to speaking engagements.

Continued development of a grazing system. Managing the production of dairy cattle in a rhythm synchronized with the rhythm of grass production permits the economy of the farm to prosper and flex with ebbs and flows in milk prices and input costs.

“Our farms are based on a biological rather than industrial model of production, thus diversity in the system is critical,” says Joe. “Grass-based farms of 150 cows and 300 to 400 acres managed in a diverse, biological system can be profitable and offer a viable future for younger producers.”

Matching the cows’ peak in lactation with the peak growth in pasture forages is the key to making a biologically based production system function most efficiently. Since cows give the most milk in the first 100 days of the lactation, the cows calve in April in order to take advantage of peak grass growth in May and June. Grass makes up 70 to 75 percent of the diet, with a total mixed ration accounting for the balance.

A small percentage of the herd at the satellite farm calves later on in the summer and is milked over winter. “At the main farm we begin drying off in February, but the past few years we have continued to milk as few as 30 cows until we begin freshening again in April,” says Joe.

With this seasonal, grass-based system of production cows can overwinter on lower-quality hay, most of which is purchased.

At the satellite farm cows graze 200 acres of grass-legume forage, while at the main farm the cows graze 320 acres of forages. At both farms permanent fencing creates paddocks ranging in size from six to 25 acres. Polywire subdivisions permit further division of the paddocks so that cows are allocated only the amount of forage they can consume in a 12-hour period.

At the peak of the growing season, when grass grows faster than cows can keep up with the grazing, hay is harvested in some paddocks. This harvest sometimes yields 50 to 70 percent of the feed needed for winter.

Managing cattle within a grass-based system and seeing firsthand the biological and economical efficiencies of producing milk from grazing cows inspires Clem and his wife, Malinda, to think that one day they might indeed own their own dairy. Before coming to work at the Tomandls’ dairies, they had given up this dream because of the high investment costs of getting started on a dairy.

But living and working together on the satellite farm has shown them a viable, yet more accessible style of dairying. “Right now, we’re happy where we are,” says Clem. “But we don’t rule out having our own dairy one day. Working here, in the Tomandls’ grass-based system, we’ve learned that people can start dairying with a moderate investment. In the long run, the system offers economic viability.”

Started a search for investors. With the average age of dairy producers now reaching the mid- to late-50s, a younger generation of dairy managers and owners is badly needed. But finding highly skilled, committed young candidates is a challenge for producers who are soon to retire. For grass-based farms this difficulty is even more acute because of the diverse managerial skills required to run such enterprises.

The formalized employment and curriculum requirements of the DGA now provide a pathway for developing such skilled individuals and providing the networking avenues that may ultimately help them find employment and ownership opportunities with experienced grass-based producers who may possibly soon retire.

Yet finding affordable financing for a start-up dairy often hinders even the most skilled young people. To provide alternative financing, the DGA hopes to link with investor groups willing to provide further opportunities for younger operators to get started.

“We’re looking for investors who would be willing to take over farms that are for sale and lease them to Journeymen Dairy Graziers,” says Joe. “After five to seven years the young people could perhaps have cattle and equipment paid for. They could then leverage that equity against the purchase of the farm from the investors.

“Through the Dairy Grazing Apprenticeship we’ve created a standardized, hands-on way of teaching and training young individuals who can become skilled managers and owners of grass-based dairies,” he says. “We’re creating a pathway for continuing independent ownership of dairy farms. Retiring farmers can tap into this group of skilled people, giving them an option to transfer their farms.” 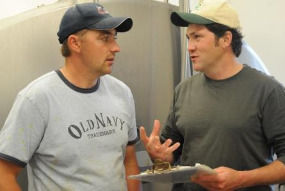 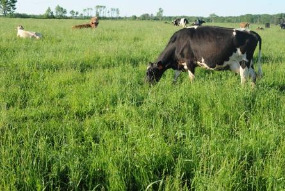 At the peak of the growing season, when grass grows faster than cows can keep up with the grazing, hay is harvested in some paddocks. This harvest sometimes yields 50 to 70 percent of the feed needed for winter. 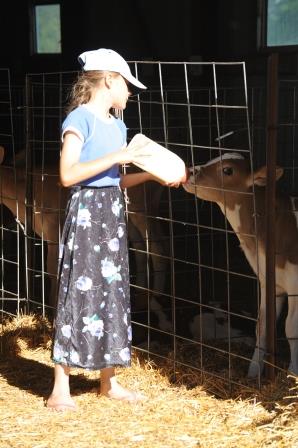