A Plan Opens the Door to Dairying

While growing up on a small beef farm near Rib Lake, Wisconsin, Brandon Probst showed early interest in dairying and at age 12 began milking cows for neighbors Glenn and Mary Harder. His work for them continued through high school, and from the Harders he began learning the skills needed to eventually manage an organic, grass-based dairy.

The couple recognized the youth’s aptitude for the work. With plans for their own retirement on the horizon, they began speaking with Brandon about his future career path. These discussions led to a three-year plan intended to prepare him for managing his own dairy.

During the three-year period Brandon worked full time on the Harders’ dairy. He also acquired heifers, thus building equity in his own herd.

At the end of the period Brandon, now 21, purchased the Harders’ machinery and 50-cow herd, all financed by a contract with the retiring farmers. He leases the dairy facilities and pasture.

The arrangement gives Brandon a secure way to establish his future while also providing avenues for the Harders to remain actively involved in a farm and way of life they worked hard to build.

Brandon Probst’s interest in dairying unfolded over time. It grew simply from his interest in having a job away from home at the age of 12. “I wanted to work, and I took the first job I could get,” he says.

That just happened to be milking cows for the parents of his best friend, Michael Harder. The Harders ran a grass-based dairy near Rib Lake, Wisconsin, and lived just seven miles from Brandon’s home where he lived with his parents, Paul and Kim Probst. The Probsts had a small beef operation.

While Brandon was wanting work, Glenn and Mary Harder were needing an extra hand. The part-time job with them was perfect. With his friend, Michael, Brandon rode the school bus to the Harders’ farm, helped with the evening milking, and then caught a ride home with his mother.

Over time, the cows got under his skin, so to speak, and he found himself in love with milking. He grew older, became a high-school student, and yet he kept milking, his interest in employment never straying from the Harders’ barn.

Meanwhile, the Harders’ five children decided to stake their livelihoods off the farm, creating a void in the future of the family’s dairy. With their young employee, Brandon, continuing to grow in his interest in dairying and aptitude for the work, the Harders began considering him as a possible successor.

As their retirement years approached, they worked out a plan that would help Brandon get started dairying on their farm. These are the steps they took to facilitate that process:

“Mary and I wanted to see our farm carry on into the next generation as a working dairy,” says Glenn. “So when he was a senior in high school I asked Brandon if he wanted to make farming his career.”

The answer was a resounding yes. Says Brandon: “I knew that I enjoyed dairy farming and that it is what I wanted to do with my life. Of all the kinds of work there is to do on a farm, milking cows is my favorite job.”

With the desires of the retirees and the beginner clearly communicated, the potential partners began discussing ways they could make Brandon’s transition into dairying possible. They agreed upon a three-part preparatory plan to unfold over three years. Their plan involved building equity for Brandon, increasing his managerial expertise, and helping him develop a viable way to finance the eventual purchase of cows and machinery.

As part of the successional process the Harders and Brandon participated in the Dairy Grazing Apprenticeship, a two-year program matching qualified Apprentices with qualified Master Graziers.

Building within relationships the level of trust needed for beginners and retirees to work together productively results only from purposeful commitment.

“The outcome of any effort to transfer succession of an operation depends on the relationship between all parties,” says financial advisor Tom Cadwallader. “From the outset it’s important for both beginners and retirees to work at building good relationships with each other.” Within the Dairy Grazing Apprenticeship, Tom works with both Masters and Apprentices seeking help with business planning and financial management.

Built equity in cattle. To better equip Brandon for the eventual financing required to buy the herd and farm equipment, the Harders paid Brandon an annual bonus of six heifer calves in addition to a wage. These cattle stayed in the herd, and after three years Brandon had acquired 18 head of his own. These became equity he could use to better secure financing opportunities.

An overall increase in the size of the dairy herd was needed to accommodate Brandon’s ownership of cattle as well as his full-time wage. “Because we needed two incomes, we increased the herd from 42 cows to 60,” says Glenn.

A downside to growing the herd was the needed increase in the amount of stored feed required.

Strengthened managerial skills. To prepare Brandon for the potentially complex task of eventually assuming management of cattle, organic milk production, pasture and finances, the Harders engaged him in decision making.

Says Glenn: “From the day we started working together on our three-year plan, I told Brandon, ‘You’re not my hired man; you’re my partner. You’ve got to help me make decisions in managing the farm. It’s the only way you’re going to learn how to become a manager.’ ”

Decision-making responsibilities combined with the DGA curriculum gave Brandon more detailed insights into the Harders’ management practices, which he was to eventually adopt as his own.

While lactating, cows graze a 65-acre pasture crossfenced into 14 paddocks. These are split daily into segments providing the herd with 12 hours of grazing. Pasture forages include timothy, fescue, and both red and white clovers. When forages must be re-established, the seed is no-tilled into the sod. Typically the grazing season begins by mid- to late April and lasts until October. During this time cows also receive a grain ration. Cows are milked year-round in a 28-cow tie-stall barn, and they winter outside on a bedded pack sheltered by a windbreak.

Brown Swiss cows make up 40 percent of the herd, while Ayrshires account for another 40 percent. The balance of the cows are Holsteins and Milking Shorthorns. In order to breed cows to sires offering the genetics best suited to the farm’s management practices, Brandon learned from Glenn how to breed cows by artificial insemination.

Besides participating in decision making with the Harders, Brandon learned about the economic workings of the operation by beginning to keep the financial records during the three-year period preparing him to take on full responsibility for the farm.

“I wanted him to understand where the money comes from and how it’s spent,” says Glenn.

By keeping the financial records, Brandon saw firsthand the economic viability of the grass-based, organic dairy under the Harders’ management. He recognized their rationale in maintaining low-cost facilities and saw how all aspects of the operation worked together to create profitability for an operation with a dairy herd of relatively small size.

“Having a grazing farm to start out with makes it financially a lot more stable,” says Brandon. “In my experience, it’s profitable to be organic as well as grass based. By being a grass-based diary, I can definitely keep my costs down.”

Wrote a purchase agreement. As the partners approached the end of their participation in DGA and the completion of their private three-year program, they agreed on a financial process by which Brandon could buy the herd and some equipment.

With input from Brandon, the Harders decided to finance Brandon’s purchases with a five-year purchase agreement. They allocated interest at 3 percent for financing his purchase of 50 cows, a tractor, haybine, feed wagon and skid-steer loader. An annual fee for Brandon’s leasing of both pasture and milking facilities is included in the agreement.

Brandon’s ownership of the herd and equipment began in May of 2012. His payments to the Harders are made by “assignment” from the sale of milk. At each payment period, the milk processor pays both parties a sum reflecting their mutual shares in milk sales.

The partners agreed on this financing option after Brandon explored other avenues for borrowing money. While lending agencies presented workable possibilities, Brandon chose to acquire financing from the Harders because he personally felt more comfortable with that arrangement.

“It’s an advantage for us to finance him because it spreads the income out for us, reducing the amount of capital gains we have to pay in a year,” says Glenn. “The interest rate of 3 percent is better than the 1 percent we would have earned from a lump sum earning interest at our credit union.”

In general, purchase agreements that spread payments over time can benefit both parties. “For the incoming farmer, deferring payments can help because a beginner typically doesn’t have a lot of financial resources,” says Tom Cadwallader. “For the retiring farmers, spreading the income out over a longer period of time is helpful and lets them transfer ownership slowly and stay involved in the operation.”

In the Harders’ case, a side benefit of partnering with Brandon is indeed the opportunity to stay involved in the operation they built. Glenn continues to help with milking cows and monitoring pasture moves.

However, purchase agreements do have some drawbacks. “On the downside, these contracts slow down the beginner’s acquisition of equity,” says Cadwallader. “They also slow down the retiring farmers’ ability to move on with their lives.”

In drawing up such contracts, the critical points for both parties to discuss and write into the agreement include payment amounts, interest rate and length of the contract.

To financially jumpstart his dairy for the first year of operation, Brandon acquired an operating note from a local lender.

Rented land supplies feed. To grow hay and corn for the herd, Brandon rents land and also obtains feed from land leased by his father, Paul Probst. Together, they lease 500 acres.

“Brandon has access to a lot more acres to grow feed on than I did, and that’s an economic advantage for him,” says Glenn. “He can raise all of his own grain, which is more economical than buying it. Organic grain is very expensive to purchase.”

To fairly compensate each other’s machinery and labor while working together, Brandon and his father have struck on an arrangement based on custom rates for each type of field operation. “If I do fieldwork with his machinery, he pays me labor and I pay him the custom rate,” says Brandon.

His grandfather, LaVern Probst, also helps out with fieldwork.

As time unfolds, and Brandon and the Harders reach the end of their five-year financial contract, Brandon hopes to be debt free. He’ll then continue leasing pasture and facilities from the Harders as he works to save the capital needed to make a down payment on a dairy farm of his own. 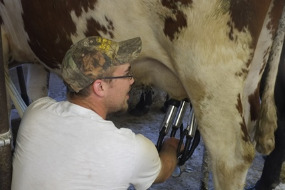 "I knew that I enjoyed dairy farming and that it is what I wanted to do with my life." - Brandon

Brown Swiss cows make up 40 percent of the herd, while Ayrshires account for another 40 percent. The balance of the cows are Holsteins and Milking Shorthorns. 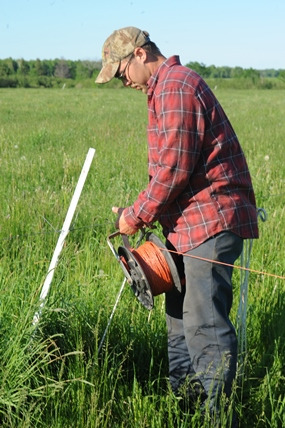